The Bezos Factor: Who Fell a Few Rungs Thanks to Amazon 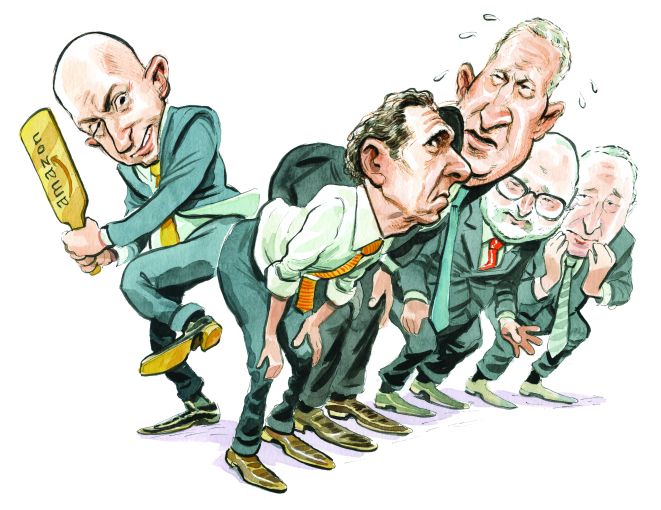 On Feb. 13, there was a pretty good case that Gov. Andrew Cuomo could have slipped into the top 10 on Commercial Observer’s Power 100 list.

As a rule, CO tries to keep pols out of the top tier if for no other reason than that their power is so wildly out of proportion with everybody else’s. If, say, a Douglas Durst or a Rob Speyer wants a subway line open, well, they can hire the priciest lobbyists and hope for the best. If the 56th governor of New York wants a running L train, there’s a good chance he can get a running L train—despite what the rest of his advisers think.

But late last year, when New York emerged victorious in its effort to lure Amazon’s HQ2 to the Empire State, Cuomo looked like more than your average governor. He was more ambitious. More successful. More powerful.

Then, on Feb. 14, Jeff Bezos showed the limits of what political power can do.

Several extremely connected, powerful people fell in our estimation when Bezos dumped New York on Valentine’s Day—the governor being the most prominent. But his frenemy, Mayor Bill de Blasio, also took it on the chin. In the months before the pullout, de Blasio sounded as committed as any New Democrat to making Amazon work in Long Island City, Queens. For a moment, all the bad blood between Cuomo and de Blasio looked like it would be laughed about around some future Christmas fireplace. Probably the less said about their temporary alliance, the better.

Another big advocate for Amazon was the Real Estate Board of New York. The November elections were a moment of peripeteia for the 123-year-old lobby; a national wind of left-wing sentiment blew some of REBNY’s most prominent allies out of office. Since then, REBNY has gingerly finessed its positions to be palatable to an AOC-inspired City Council and state Senate. But the one throwback that would always resonate with their membership was that they had successfully helped usher Amazon to New York.

It would be difficult to view the Valentine’s Day decision as anything other than a disaster for REBNY—and while none of the decision-making was in the hands of REBNY’s president or chairman, it has to be considered in their ranking if we’re talking about power and influence.

In November, when the Amazon deal was announced, there were stories of the flood of people who stampeded to Long Island City, hoping to secure an apartment while the getting was good (Modern Spaces’ Eric Benaim told The Wall Street Journal he “sold 20 apartments via text”). Temporarily, a number of prominent real estate developers and owners looked, for a moment, like they would be poised aboard the Hudson Yards of the 2020s.

For the most part, their position isn’t very different than it would have been if we had been drawing up the Power 100 in October of 2018—except for the psychological devastation of having been left at the altar.

Savanna was probably hit the hardest; the firm practically had a lease in hand to rent more than 1 million square feet at One Court Square to Amazon when Bezos pulled up stakes. It was the kind of deal that, had it come to fruition, would have raised its profile to the heavens.

Likewise, Tishman Speyer had been making huge moves in the neighborhood for years with properties like Jackson Park, a three high-rise residential project, and The Jacx, a two-towered, 1.1-million-square-foot office project.

All that being said, the damage was fairly contained.

It’s not as though Tishman Speyer isn’t a global behemoth with some 47.7 million square feet of property under its belt—just in North America. Thomas and Frederick Elghanayan even moved up in our rankings, thanks to the fact that they announced a multibillion dollar redevelopment of the Grand Hyatt and picked up two Pacific Park parcels at 615 and 595 Dean Street in Downtown Brooklyn for $143.1 million. And Savanna didn’t even act like they had hit a setback. Within two months they were in negotiations to lease the bulk of the space to Centene, according to Crain’s New York Business. (Nor has it slowed down their appetite for acquisitions, having grabbed 521 Fifth Avenue from SL Green for $381 million last month.)

Of course, while there were many who fell because of Amazon, others rose. Not too many New Yorkers knew the name Michael Gianaris, who represents New York’s 12th district in the state Senate. But they do now. Gianaris even has the dubious distinction of having graced the cover of The New York Post under the headline “Prime Suspect: Meet the Man Who Killed the Amazon Deal.”

An exaggeration? Perhaps. The decision to scuttle Amazon HQ2 in New York City belonged to nobody outside of Amazon. But Gianaris no doubt played a role—and he was remarkably successful in what he set out to do. Successful enough that we thought he deserved the No. 40 position on Power 100.