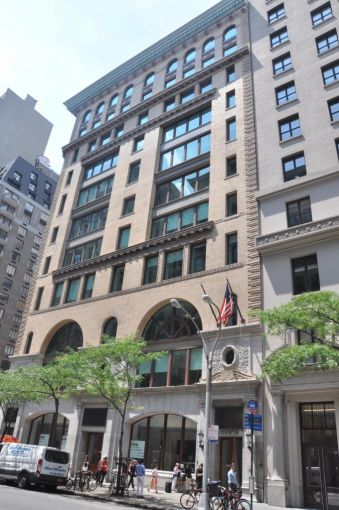 Samson Management and Rabina Properties have nabbed $109 million in debt from New York Community Bank (NYCB) to refinance their office building at 110 Fifth Avenue, according to city records filed today.

Meridian Capital Group’s Avi Weinstock and Chaim Tessler arranged the financing on behalf of the borrowers.

Queens-based Samson manages the fully-leased asset—at the northwest corner of West 16th Street—and has a 50 percent stake in the building, with Rabina holding the remaining interest.

Samson and Westchester County-based Rabina acquired the 11-story, roughly 176,000-square-foot mid-rise office tower for $18.5 million in 1996 from The New York Times Company, funded by a $12 million loan from Samson Funding. It was built in 1888 and last renovated in 2012, according to information from Samson’s website.

In Oct. 2018, online news and media outlet BuzzFeed took 11,000 square feet at the base of the building for its new retail toy store concept, Camp, as CO previously reported. BuzzFeed’s space, which also includes 2,500 square feet below grade, was previously occupied by apparel retailer Joe Fresh. BuzzFeed is subleasing the location from the company that owns Joe Fresh, Canadian retail conglomerate Loblaw Companies.

Samson is currently locked in a legal battle with previous tenant, Town Residential, to recover over $430,000 in alleged unpaid rent for its 16,600-square-foot space at the 19th-century office building.

A representative for Samson declined to comment on the deal, and an official at Rabina was not immediately available for comment.