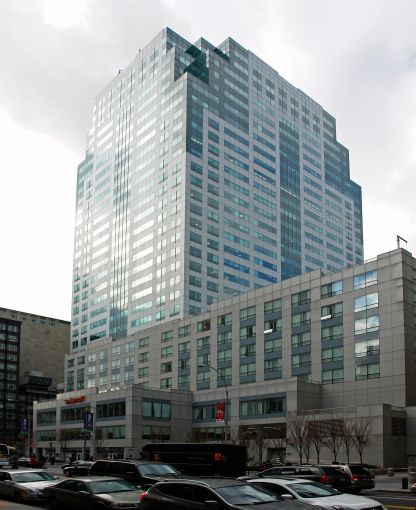 Muss Development and partner HomeFed Corporation have locked in $90 million in debt from LoanCore Capital to finance a portion of the office condominium within Brooklyn Renaissance Plaza, the duo’s mixed-use complex in Downtown Brooklyn, according to city records and a source familiar with the transaction.

The fixed-rate debt was backed by a roughly 298,000-square-foot office condominium from floors 24 through 32, sources with knowledge of the deal told Commercial Observer. The deal closed on April 11.

In March 2018, Muss and HomeFed landed $198 million from CGA Capital to refinance the mixed-use complex, as CO reported at the time.

The roughly 850,000-square-foot property—with an alternate address of 335 Adams Street—includes a 24-story, 667-key New York Marriott at the Brooklyn Bridge hotel at its base, from floors two through seven, and has a 32-story office building, accompanied by a four-story, 1,000-space parking garage.

The fully-leased office tower, located at 350 Jay Street, near the base of the Brooklyn Bridge, is home to a range of government tenants. The New York field office of the United States Secret Service occupies nearly 100,000 square feet across the top three floors of the building, according to data from CoStar Group. It also plays host to the Brooklyn District Attorney’s Office—housed on floors eight through 30—and the New York City Employees’ Retirement System on the first and 21st through 23rd floors, on a lease that expires in April 2020.

Muss and Leucadia National co-developed the property—designed by William B. Tabler Architects—in 1998, when the New York Marriott at the Brooklyn Bridge represented the first new hotel to be built in the borough in 50 years, as CO previously reported.

Four years ago, when Leucadia acquired a majority share in Carlsbad, Calif.-based residential developer HomeFed, it funded the acquisition, in part, by transferring its 49 percent ownership stake in Brooklyn Renaissance Plaza, as per a previous report by The Real Deal.

An official at Muss did not immediately respond to an inquiry. A representative for HomeFed was not available for comment.