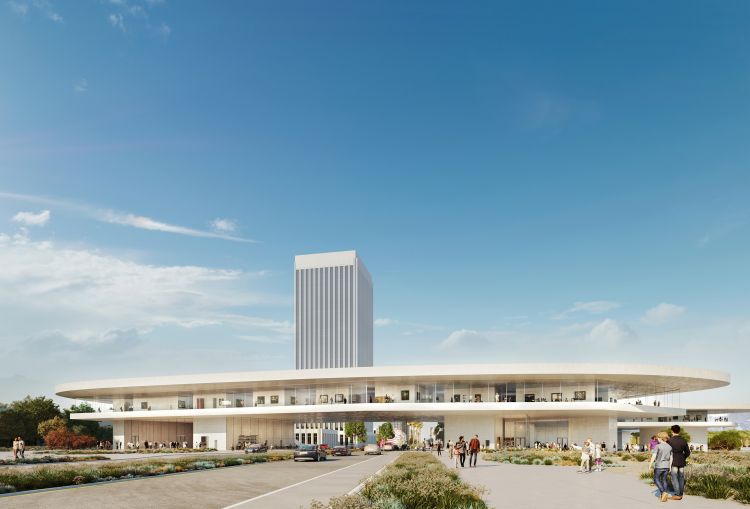 The five-member board of supervisors, which serves as the governing body of the county of Los Angeles, voted to certify the new building’s final environmental impact report , approve the demolition of four existing LACMA buildings and to release $117.5 million in county funds toward the construction of Zumthor’s design, which has been the subject of criticism over a reduction in its footprint and, thus, higher per-square-foot costs. Naysayers have also critiqued the aesthetics of the new museum and the plan to replace permanent galleries of key collections with rotating exhibits.

In addition to the $117.5 million contribution, the second installment of a total $125 million in public money set aside for the project, the Supervisors will also issue $300-million in bond proceeds to fund construction, according to Urbanize Los Angeles.

The bond proceeds are to be repaid through LACMA’s fundraising efforts. (To date, LACMA has secured pledges of $433 million for the project out of a total goal of $525 million—including a $150 million naming gift from movie producer David Geffen.  LACMA has collected $82 million of the $433 million pledged funds, according to a staff report to the Supervisors.)

“This is a milestone moment, this is the big green light to go forward,” Govan said in an interview after the vote.

High profile backers in attendance at the hearing at the Kenneth Hahn Hall of Administration in downtown Los Angeles included artist Thomas Houseago and Kerry Brougher, whose Academy Museum of Motion Pictures under construction next door to LACMA.

Actor (and architecture enthusiast) Brad Pitt also spoke up in support, calling Zumthor “one of the great architects of our time.”

Fundraising for the Zumthor project, which experienced permitting and entitlement delays, as Commercial Observer previously reported, has also slowed, standing at around $560 million since December.  As The Los Angeles Times previously reported, the project will require $650 million to complete.

The museum is hoping to have the new building substantially completed by the end of 2023, with the public opening pushed to early 2024.