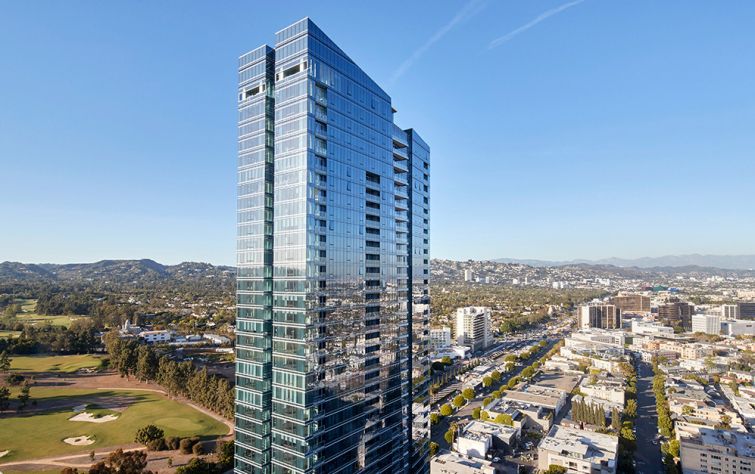 “Natixis gave us a great execution on both transactions. They are one of our most stalwart and trusted lenders, and the whole team was fantastic to work with.” Casey Klein, a principal at Crescent Heights who oversees the company’s national developments as well as the capital markets side of the business, told CO.

Jerry Tang—Natixis’ global head of real estate & hospitality distribution—and Michael Magner—a managing director at the bank—led the financings. Cooper-Horowitz Principal Richard Horowitz was an adviser to all parties in the deals.

First up, Natixis provided a $350 million, 10-year refinance for Crescent Heights’ Ten Thousand property, located at 10000 Santa Monica Boulevard at the intersection of Beverly Hills and Century City in L.A. The debt replaces a $360 million loan provided by Bank of China in 2017.

The 40-story luxury tower includes one- to four-bedroom residences with unobstructed views of the Pacific Ocean, Downtown L.A. and the Hollywood Hills. Handel Architects designed the shimmering, all-glass structure with an angled roof —in contrast with the flat-top architecture that surrounds it.

The property features 75,000 square feet of wellness- and entertainment-focused amenities—including a fitness center, a 75-foot lap pool with underwater speakers, a screening room, a game room and a one-acre private park—as well as hospitality-style services provided by its house staff of 80.

Ten Thousand sits on the site of what once was the famed Jimmy’s restaurant, an L.A celebrity hangout in the 1970s and 1980s.

The 1-million-square-foot property opened in 2013 and Natixis’ loan replaces $390 million in financing—also from Bank of China—provided to the developer in April 2015.

Building amenities include a 7,000-square foot fitness center with a 1,500-square-foot energy solarium; a third-floor urban terrace with a 60-foot heated saline lap pool and communal fire pit; a 11th-floor terrace with barbecue grills and outdoor televisions; and a 24th-floor skyline terrace.

“NEMA” is short for new market, and Crescent Heights will soon be in the market seeking new financings for its NEMA Boston and NEMA Chicago properties. The developer hopes to close those two deals—which will both be in the $400 million range, Klein said—within the next four months.

NEMA Boston—located at 399 Congress Street in the city’s trendy Seaport District—is a 22-story tower featuring 414 residences and 2,500 square feet of retail and lobby space on its ground floor.

The Rafael Viñoly-designed NEMA Chicago is the city’s tallest rental residence at 76 stories. The property includes 70,000 square feet of amenities and features views of Lake Michigan and Grant Park.