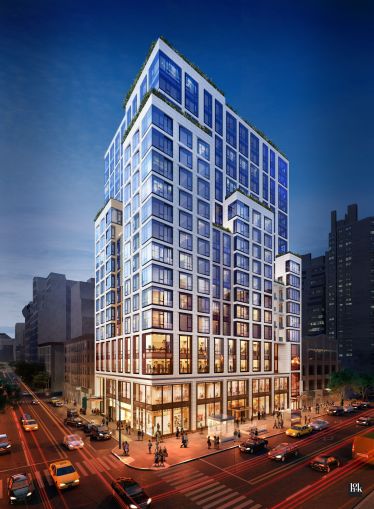 The bank will open a branch on the ground floor of the newly developed 21-story condominium building, christened the Hayworth, according to information from Ceruzzi. It joins Old Navy, which leased a multi-level space spanning 18,500 square feet at the building, as CO previously reported.

Andrew Mandell of Ripco represented Ceruzzi and Cushman & Wakefield’s Michael O’Neill, Jason Greenstone and Taylor Reynolds handled Chase’s side of the deal. “This is an irreplaceable location,” Mandell said. “And Chase leasing it is testament to that.”

The Hayworth is a $415 million, 229,751-square-foot development, which includes 61 condo units and 25,000 square feet of retail space, developed by Ceruzzi. Residential amenities including a children’s playroom, a teen room, a fitness center and a rooftop terrace.

The building is located close to the entrance of the East 86th Street subway station on the green line and at the center of a busy shopping corridor on the Upper East Side. The developers spent close to $10 million on a new entrance to the station, which involved expanding the sidewalk, adding an elevator, and relocating the staircase which had previously been inside the building, Ceruzzi’s Ken Cartelli said.

With the Chase deal, the building is now fully leased. “We’re very pleased that we’ve leased the entire retail component of the project with two recognizable, national brands,” Cartelli said.

Construction is nearing completion, and occupancy is anticipated for fall 2019, according to information from Ceruzzi.