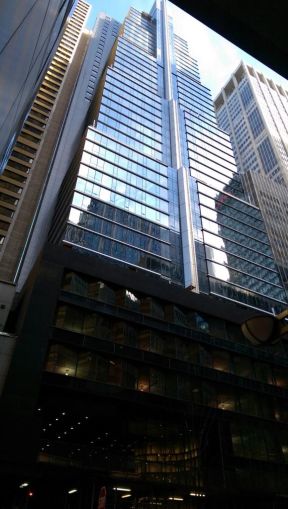 The fashion house Badgley Mischka will consolidate its New York City offices to two floors at 133 West 52nd Street, and also nabbed the naming rights for the building, The New York Post reported.

Badgley Mischka signed a 10-year lease for 25,578 square feet on the fifth and sixth floors of the Beekman REIM-owned office portion of the 46-story residential condominium building between Avenue of the Americas and Seventh Avenue, the Post reported. The asking rent was $78 per square foot.

The fashion brand—started in 1988 by Mark Badgley and James Mischka—will ditch its current spaces at 550 Seventh Avenue and 1370 Broadway to move into its Midtown digs, according to the Post.

Beekman’s Ariel Lahmi was the sole broker in the deal. Representatives from Beekman and Badgley Mischka did not immediately respond to request for comment.

The Chetrit Group bought the former Flathotel at 133-135 West 52nd Street for $180 million in 2013 and renovated it into a 109-unit luxury condo building, The Real Deal reported.

It sold the six-story, 56,000-square-foot office portion at the base of the building to MRP Realty and Long Wharf Real Estate Partners for $36 million in 2015, according to TRD. Beekman picked up the office condo last year for $46 million with plans to renovate the property, as per TRD.