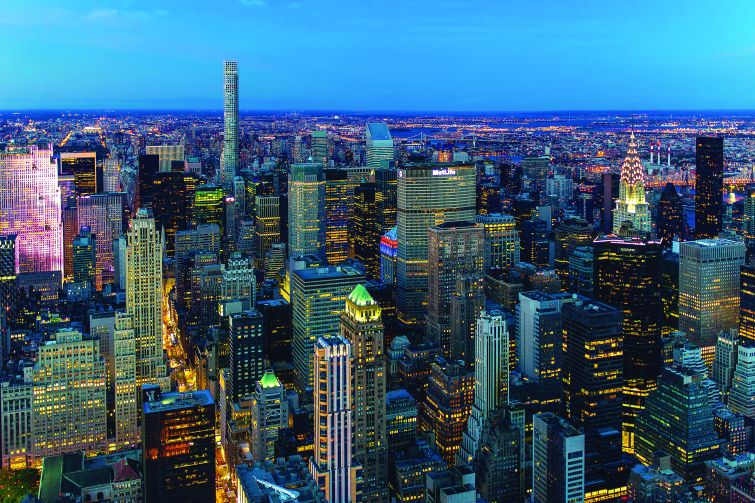 Views of Midtown and the Upper East Side. Photo: Getty Images

Last year was a blockbuster year for office leasing activity in Midtown, the best of the millennium, just about. But in terms of rent growth, the market hasn’t seen a corresponding burst.

Where rents in Midtown South and Downtown have grown spectacularly since the recession, Midtown has not kept apace.

In Midtown South, average asking rents more than doubled between the first quarter of 2010 and the end of 2018, and in Downtown, rents were up 67 percent, according to data from Colliers International. Both markets have also exceeded their pre-recession peaks, of $49.92 per square foot for Downtown and $61.60 for Midtown South, compared with their current respective rents of $61.81 and $75.98 per square foot.

By contrast, Midtown’s rents increased 41 percent since 2010 and, at $83.28 a foot, were far below the pre-recession peak of the low $90s. In addition, Midtown South surpassed Midtown’s asking rents for the first time in 2018, according to data from CBRE.

“Normally the three markets work in a kind of lockstep,” said Michael Cohen, the president of the tri-state region at Colliers. “This is the first ever time since I’ve been in the business, that Midtown has been the under-performer. It’s kind of unprecedented.”

That’s not to say that rents are weak. They have been on a fairly steady upward trajectory since the recession and in 2018 were up 3 percent compared with the previous year. But in relation to the overall growth in Manhattan, the growth is lackluster. “A lot of people have been predicting a softening of the Midtown marke; what we’ve gotten instead is stability,” Cohen said.

Michael Slattery, a research manager at CBRE, said a big difference between the markets is that by starting higher, Midtown had less room to grow. “When you’re looking at growth rate, a smaller number moves the needle more in a market with lower rents,” he said.

And in fact, in the most recent data from CBRE, for February of this year, while leasing was down in Midtown compared with last year, asking rents had inched passed $85 per square foot for the first time since 2008, and up 9 percent since February 2018.

Another factor to take into account is the huge variety in quality in Midtown buildings, and the fact that most newer, or recently refurbished buildings, are quickly occupied, leaving the older stock—with lower asking rents—on the market, Slattery said.

That’s also the key factor affecting the market overall: that migratory patterns have changed, and tenants are more likely to seek out product that’s right for them regardless of geography.

“Historically, Midtown tenants didn’t look outside of Midtown. Now tenants look at it from a product standpoint rather than a geographic standpoint,” Slattery said.

“Especially for larger uses, there is an affinity for tenants to go to new construction or significantly renovated products,” he added.

That means tenants are heading to Hudson Yards, to Lower Manhattan, but also to repositioned core Midtown properties, like Minskoff Equities’ 590 Madison Avenue, or Rockefeller Group’s 1271 Avenue of the Americas.

For example, law firm Latham & Witkins and wealth manager Bessemer Trust relocated to Rockefeller’s property, taking 407,000 and 239,000 square feet, respectively. The 48-story tower, formerly known as the Time & Life Building, underwent a $600 million renovation after its sole tenant, Time Inc., left in 2015 after 55 years in the building named after it.

“There’s clearly a preference for new or like-new physical product,” Daniel Moore, the CEO of Rockefeller, said, and Time’s exit gave Rockefeller a chance to upgrade the building so that it could compete effectively with newer product. The building is now 70 percent occupied, and the renovation will be completed later this year, Moore confirmed.

And Midtown has plenty in the pipeline that could appeal to these tenants, including Olayan Group’s revamped 550 Madison Avenue, the collection of Manhattan West buildings, and SL Green’s One Vanderbilt, which is 54 percent leased as of this month, as Commercial Observer reported. Asking rents at the 55-story tower have ranged between $135 and $160 per square foot.

The question will be how they are absorbed. In 2018, absorption in Midtown was positive, with a net 1.5 million square feet leased, as it has been for five of the last six years, data from Colliers indicate. Availability was down to 9.8 percent from 10.4 percent a year earlier.

Rockefeller’s Moore said that another area affecting the office market is the change in tenant demands. “Our definition of ‘Class A’ is being stretched and pulled in new directions,” Moore said. In addition to location and the architecture of a building, tenants also look for a certain level of hospitality-esque amenities, he said.

But there, Moore said, Midtown has the upper hand: “The amenities that you can provide by being in Midtown is more than any one building can provide on its own.”