Going My Wei: Behind Fosun’s Transformation of 28 Liberty Street

Fosun’s Wei Bo entered the New York office market in 2013 with the purchase of 28 Liberty Street and hasn’t looked back. 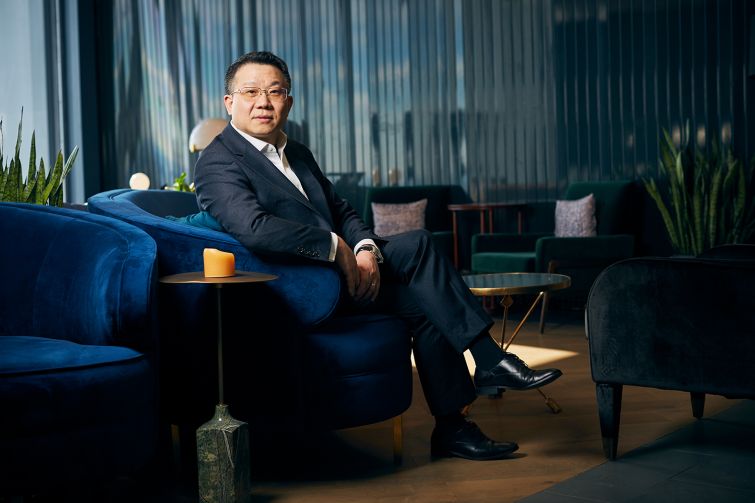 The evolution of the Financial District is ongoing. Long gone is the Wall Street of the 1980s, when hair was high, cell phones were the size of bricks and quotrons were buzzing. Instead, the famed street is now frequented by tourists taking photos and local residents walking their dogs.

Take a five minute walk northeast of Wall Street, and you’ll reach a building that underscores its regeneration: 28 Liberty. The 60-story skyscraper, formerly known as One Chase Manhattan Plaza, was built in 1961 as a commanding—yet somewhat unwelcoming—investment banking office tower. Maybe it was the cold steel facade, or the building’s gold vaults (which are still there, incidentally,) which made it seem particularly fortress-like.

But this is the image the building’s owner—Chinese conglomerate Fosun International—has been trying to dispel.

And, it has succeeded: 28 Liberty is no longer a fortress. More of a beachhead.

The conglomerate began considering U.S. real estate investment back in 2010, paying close attention to gateway cities with a desire to make some strategic investment plays. And by the time 28 Liberty came on the market in 2013, Fosun was ready to jump in head first, acquiring the 2.2-million-square-foot building—its first office property in the U.S.—for $725 million in cash. In 2015 it announced plans for a 47-story tower in NoMad, which is being co-developed with J.D. Carlisle Development Group (and financed by Bank OZK).

“I think Chinese companies are no different from American companies. Each company has a different viewpoint, and we adjust our strategies according to our goals,” Bo told Commercial Observer. “In terms of overseas acquisitions, starting from the end of 2013 when we bought this building to the middle of 2015, we always closed one deal per month in terms of overseas mergers and acquisitions. But in the middle of 2015 our board of directors made the decision that we had to slow our pace a little. That wasn’t according to any capital control or regulations because there were no capital control at the time.”

“Fosun is different from the other Chinese companies because we’re [investing] in different sectors,” Bo added. “Starting late last year we started to do more deals overseas [again]. We didn’t have a big pause in between; we just slowed down a little so the quantity of the deals decreased.”

Bo, 55, has more than 30 years of experience in investment in commercial and residential property. The married father of an adult son packed his bags and moved from Shanghai to the Financial District once the 28 Liberty acquisition was complete.

“I always have believed the New York real estate market is the most attractive one globally,” Bo told CO last week. “For foreign investors the key principle is that you have to respect and understand the local market.”

Fosun endured fierce competition for the asset at the time of the purchase—not that this was a deterrent.

“We thought it was a great deal. Our view was that the renaissance of Downtown had begun, but it wasn’t yet at its peak. Plus, for a foreign buyer it’s a great opportunity to acquire such a strategically important building.”

CBRE’s Darcy Stacom and Bill Shanahan led the asset’s sale. “At that point there was a lot of [investment] activity from the Chinese community,” Shanahan said of foreign interest in New York real estate assets at the time of the sale. “Fosun were highly professional in the way they approached the sale and extremely well versed in the New York market.”

And, as New York debuts go, “they sure made a splash,” Shanahan said and laughed. “They outbid a lot of better known names in the market, and fast-forward five years later, I think they’ve proved out their vision for 28 Liberty.”

Bo (and a translator) met with CO over cappuccinos at Manhatta, the restaurant from Danny Meyer’s Union Square Hospitality Group on 28 Liberty’s 60th floor and the jewel in its crown. The restaurant has sweeping views over Manhattan and Brooklyn and a 30-day waiting list for reservations.

The floor was previously used by Chase as an events and private dining space and underwritten as office space at the time of the trade, said James Connors, Fosun’s managing director of asset management. “But the Fosun team thought, ‘You know what, we can do better. It’s such a special space.’ ”He wasn’t wrong.

Bo joked that he needed to include Manhatta at the building as he “never cooks,” and there were few appealing dinner choices in the Financial District—where he now resides.  (He dined at Manhatta four times last week.)

“Danny [Meyer] is a one-man band for restaurant management,” he said. “If Fosun opened a restaurant on the top floor, it wouldn’t attract residents—but Danny Meyer does.”

But, Manhatta will soon be just one of the big attractions to 28 Liberty. Fosun recently announced the completion of the property’s repositioning with a 200,000-square-foot retail destination, Marketplace 28. Movie theater Alamo Drafthouse has leased 40,000 square feet for a 600-seat, 10-screen theater—set to open in the fourth quarter of 2019—and Legends Hospitality will operate a culinary and live entertainment destination in 35,000 square feet on the ground floor.

The Legends venue—which will open in the first quarter of 2020—will encircle the historic Noguchi Garden and feature a white tablecloth restaurant.

The two retail anchors act as bookends for Marketplace 28, said Tom Costanzo, Fosun’s managing director of leasing, with space remaining in the middle retail strip currently in the process of being leased.

“Retail today has gone away from selling stuff into doing stuff,” Costanzo said. “We’re talking to a lot of entertainment destinations, everything from pretty cool golfing concepts mixed in with food and beverage.”

The food component will open in 2020. A Chase branch currently sits at the site, but the bank is set to move out in May, after which its space will be demolished and delivered to Legends Hospitality.

“It was important for us—especially as a company who isn’t based in the U.S.—to get community feedback and ensure we were being good corporate citizens,” said Jason Berkeley, Fosun Property’s managing director of development and construction, said of the repositioning.

“When Chase owned the building, because of the nature of their business, there were security checks when you entered the lobby,” Bo said. “When we came, from a business perspective, we wanted the commercial space to be more welcoming.”

Since 2015, Fosun has held several events on the 2.5-acre plaza, including river-to-river music festivals, food festivals and movie nights. “For the first year we didn’t have much experience so everyone who came sat on the ground,” Bo said. “The second year we learned our lesson and provided some chairs.”

Every World Cup match was broadcast on 28 Liberty’s lobby LED screen last year and projected onto its massive plaza. Fosun set up 300 seats for spectators and office workers at 140 Broadway even viewed the matches from the building’s second and third floors.

“It’s been a really exciting project and to take an asset with a profile and image that was so entrenched in the institution that developed and occupied it for so many years, reposition it and create what is now 28 Liberty has really been a lot of fun,” said John Wheeler, a managing director at JLL who leads office leasing for 28 Liberty.

“Our collective first impression [of Fosun] was that we were very impressed by how much the chairman of the company knew about this asset [in its current form], but more importantly what it could be and how it would be positioned in the Lower Manhattan marketplace,” Wheeler continued. “Initial conversations with Fosun and the questions asked of us really underscored a keen understanding of those aspects. It was really impressive and enabled us to think big alongside them.”

When Fosun acquired  28 Liberty, it also did so with a strong awareness of its foreign newcomer status. Most of its managing directors in the U.S. are local (including Berkeley, Costanzo and Connors), and they also hired some of New York’s top third-party agencies: JLL is handling office space leasing, and CBRE handles property management (as well as having handled the sale to Fosun, the financing for the acquisition and now the marketing of a stake in the property).

Bo had high expectations for his U.S. managing directors—in particular that they would help him react quickly to local market trends and nuances as well as help him to shape his vision for 28 Liberty.

“Every single thing we work on as a team,” Bo said. “We always have lots of debate and discussion. But I am open to different opinions. We are a newcomer. We haven’t known the market as long, so I want their second opinion to verify my judgment or my viewpoint.”

One such question was what to call the new Fosun-owned asset. Afterall, a name change was part of the deal in Fosun’s purchase of 28 Liberty from Chase. ��“My gut is the reason they want the name changed [because] if we failed it would hurt their reputation,” Bo joked.

There was talk about slapping Fosun’s name and logo on the building, but this was rejected. “Back in the 1980s the Japanese bought lots of buildings in New York City, but they retreated. So the question as a newcomer was, ‘Why do you have confidence in yourself you will succeed?’ People are suspicious about whether you can deliver.”

Instead, Fosun went for simplicity: the street name and number. But the number has deeper meaning and is a good omen. The number two represents a tale of two cities—Shanghai and New York—and Fosun’s trophy assets in each location (Bund Financial Center in Shanghai). The number eight is good fortune in Asian culture “and so, good fortune two-gether,” Bo said.

Today, with the property’s repositioning in its final stages, Fosun has engaged CBRE’s Shanahan and Darcy Stacom to market a 49 percent stake in the property. The sale is ongoing, and while Bo wouldn’t discuss it, he did say that an announcement of some form would be made in two months.

The quality of the repositioned building is the key draw for any interested bidder, Shanahan said, declining to comment on whether interested parties have been foreign or domestic. “What Fosun has done with the combination of the retail and the office components and the 2.5-acre plaza is so rare to find Downtown.”

Bo sees similarities between Shanghai and the Big Apple. “Both are very inclusive and have a very fast pace of transforming. Both cities are a center of finance but also have other supplemental industries,” he said.

The U.S., however, has a big advantage in the size, creativity and product offerings of its debt markets.

“In China they’re still way behind, that’s why we think China can learn a lot from this local market in terms of how to develop all these financing products and how they operate in this complex market,” he said.

Fosun is acutely aware of U.S. financial markets’ focus on a borrower’s track record, and creating one in the U.S. continues to be a big motivation with 28 Liberty as a pretty compelling starting point. The $800 million November 2017 refinance of the property was provided by Deutsche Bank and HSBC—both of which have transacted with Fosun entities in Shanghai—and arranged by CBRE’s Tom Traynor and James Millon.

Of what Fosun has achieved thus far at 28 Liberty,  Shanahan said,  “I think it’s been highly successful. [Fosun’s] vision was to be the heart of the community. The idea was that if you say, ‘Meet me at the movie theater,’ or ‘Meet me at Manhatta’ people would know the building because it represents more than just a place to do business; it’s a place you can entertain and a place you can bring your family as well as a place you can work.”