Out of the Comfort Zone: Newbies Take to Opportunity Zones 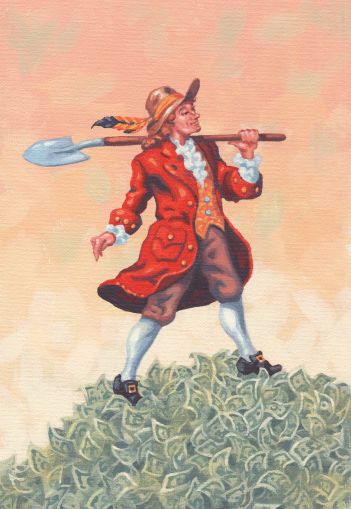 Why did the laundromat owner buy a construction plot on the wrong side of the tracks?

As buzz around opportunity zones shifts into high gear, developers across the country are hoping the answer won’t be a punchline.

“I had somebody meet with me whose family owns a very large dry-cleaning business in several states,” recounted the head of one development company, who asked to remain anonymous to protect his company’s business plans. “They’re selling this business, they have a $50 million gain and they’re thinking about [investing in opportunity zones]. The interest is well beyond real estate investors.”

The zones, created under the December 2017 federal tax reform, could hardly be better designed to funnel cash towards commercial real estate. Under the program, investors who’ve earned capital gains from any line of business can reinvest the income in real estate projects in one of the 8,700 distressed zones the Treasury Department approved last year, deferring taxes on those gains, or, if the holding period is long enough, waiving them entirely.

But will the incentives lead to smart, transformational development in needy areas, or a crowd of novice landlords who didn’t realize what they were getting into? With about $6 trillion in eligible funds looking for a home, it’s a high-stakes question.

“You’re going to have investors who—whether they’ve invested in real estate or not before—this will be an incentive for them to invest for tax efficiencies,” said Tom Straw, whose firm, Blueprint Equity, helps developers find institutional capital partners.

That could mean a broad spectrum of new entrants—from the most sophisticated to the least savvy.

The program’s bones are similar to the tax benefits of 1031 exchanges, which allow property owners to defer taxes when selling one commercial asset to buy another, under rules that have been part of the tax code for nearly a century. But because the opportunity zone law allows exchanges from other industries, it’s dramatically diversifying the field of investors clamoring to take advantage.

“On the one hand, you’ve got hedge fund managers who don’t manage real estate, but they’re very sophisticated investors,” Straw said. “But if you just sold a company and have $10 million of capital-gains exposure, you’re going to look at opportunity zones. It’s money that’s never necessarily looked at real estate.”

“I’m spending a lot of time with a family that is selling a large business. It’s going to be a few hundred million dollars of profit they’re going to realize, and they’re looking to put that money out into opportunity zones over the course of 2019,” Adler said. “Putting that kind of money out on a tight clock means they’re very, very active.”

Indeed, time can be short, because the law allows investors a strict six months from realizing a capital gain to invest it in an opportunity zone. One solution is throwing your lot in with a brand-name asset manager’s opportunity zone fund. A list compiled by Novogradac & Company, an accounting firm, counted many dozens, the largest of which, a joint effort from SkyBridge Capital and EJF Capital, aims to raise $3 billion. (At least eight others on the list, including funds from Strategic Investment Management and Caliber Companies, are targeting at least $500 million each.)

But that approach—as opposed to taking equity stakes in individual projects—may prove to have drawbacks, according to Evan Hudson, a real estate lawyer at Stroock & Stroock & Lavan.

Opportunity zone funds “are hands off, so you’re entrusting a lot of your decision making to the manager,” Hudson said. “That’s why you do your due diligence in picking your manager very carefully. With a few exceptions, you’re not investing in a proven real estate market. It doesn’t mean these markets won’t grow like crazy—they might go gangbusters—but at this point they’re not proven.”

For zones to qualify, he pointed out, more than 20 percent of its residents must be impoverished, and their median income must be less than 80 percent of the region’s income level—not markers typically associated with shining development opportunities.

To be sure, heapfuls of zones are blemish spots embedded in otherwise booming markets. In Manhattan, 35 census tracts are on the list, largely north of 96th Street. (Manhattan census tracts generally comprise several contiguous square blocks.) In Brooklyn, a whopping 124 census tracts made the cut, including sections of Lefferts Gardens, Midwood and East New York.

Far more zones across the country, however, lack the dynamism of neighborhoods like that. More typical rural zones look like the one in Caddo, Okla., a town 50 miles north of Dallas with a population of under 1,000.

Another drawback, Adler said, is that there’s not enough clarity yet about the rules for entering and leaving a fund for investors to feel comfortable about the end game.
“When you do these diversified funds, it’s not clear how an investor can sell his position in the fund,” Adler said. “If you’re a family that wants to own for 20 years, you don’t want to be in a fund that ends on a particular date.”

The same goes for an investor who, after five years in a fund, decides he wants to simply cash out and pay the capital-gains taxes he owes: the Internal Revenue Service’s rules so far don’t make clear whether that’s an option.

Investors from other industries looking to go it alone, on the other hand, face their own set of challenges—most prominently, lacking the sophistication to pursue the significant type of development work required for a qualifying opportunity zone project. For an investment to count under the plan, it must either be ground-up construction or result in a doubling of the property’s basis within 30 months. According to the development company executive, that can be a tall order for investors without much experience in the industry.

“We’ve fielded a lot of inquiries from owners that have properties in opportunity zones but that don’t have the complexity or infrastructure” to take on projects on their own, he said. “They’re looking for a partner, and we’ve had a lot of good meetings and a lot of good calls.”

Hudson, too, said he’s been greeted with a slew of calls from newbie investors who want to make sure they’re not overmatched by the nuances of the real estate tax code before signing up to make investments.

“A lot of people have very specific questions,” Hudson said. “It’s something new that’s exciting, but also scary, and it’s too early to tell what the trajectory would be.”
The zones, Hudson believes, have as much potential to be as earthshaking a development or as big of a flop as two headline-grabbing innovations from years past.

“Crowdfunding was supposed to be the biggest thing ever,” Hudson said, but it has failed thus far to become a significant avenue for investment. “On the other hand, REITs were novel once, and they’ve become a multi-trillion-dollar staple of the market.”

Opportunity zones could still land on either end of the spectrum, or anywhere in between, Hudson thinks.

Aaron Yowell, a real estate lawyer at Nixon Peabody who focuses on affordable housing work, pointed out that funding an opportunity zone project as a means to land tax-favored status might turn out to be even more complicated than other types of notoriously byzantine tax incentives around multifamily building. That’s because it’s not clear yet how the IRS will treat the cash balances that developers routinely keep on their balance sheets for contingencies.

“Some of the rules limit the types of assets that you can hold—in particular, financial assets—in a way that makes development challenging,” Yowell said. Developers “are almost always holding some kinds of reserves or working capital, and technically, the law doesn’t allow you to hold that type of asset.”

From what the lawyer has seen thus far, that complexity has served to filter out some investors who aren’t prepared for parsing the legalese that opportunity zones present.
“The clients we have who are focused on this are primarily the affordable housing developers,” Yowell said. “Affordable housing developers are good at figuring out how to do complicated things,” Yowell said.

To ensure they’re reaching the broadest possible audience, advisers are focusing their would-be-investor clients on the most straightforward strategies. In some cases, Yowell, said, that means finding ways to bring investors in on projects later in the game, once the riskiest phase of development has passed.

“The investors who would traditionally have been in this game would be the investors who don’t want development risk,” Yowell said. “We would have thought that family offices are a natural fit, but they’re very conservative, and don’t really want to sign up for a multifamily residential development. One thing we’ve focused on is finding ways to structure an opportunity zone project so that [investors] can come in later, to avoid the risk profile.”

Benjamin Pezzillo, the CEO of Pactriglo, a company that helps investors find properly zoned sites for their projects, seconded that point.

“The general approach we’re taking is [to focus on] projects that already have some velocity associated with them,” Pezzillo said.

If that sort of approach circumvents the purposes for which the zones were originally intended—to make possible developments in needy areas that wouldn’t have otherwise broken ground—it might be besides the point for investors looking to defer capital gains taxes. As you’d expect, interest has been much stronger in zones on the bubble of prosperity—like those in Southern California or in the suburbs of New York City—rather than in deeply impoverished census tracts in the rural plains states or the Southeast.

“Can you make [opportunity zones] work in the New York City [area]? Probably,” Yowell said. “But your deal there is probably pretty good already. Can you pull off mixed-use, multi-phase development in Buffalo, [N.Y.] or in Cleveland? That’s more challenging. Developers will have to take those deals and make them real.”

Meanwhile, some eager investors have found themselves face-to-face with a substantial obstacle: the partial shutdown of the federal government. Hello Living’s Eli Karp has launched a new investment platform, Hello Vision, that’s kicking off a pair of opportunity zone developments, one in the South Bronx and one in Upper Manhattan’s Inwood section.

But with the IRS down to essential workers only, Karp is still waiting for answers to key questions about how the rules governing opportunity zone funds will work.

“[The IRS] hasn’t come out with their bullet points to explain really important information,” Karp said. “I’m working on [the investments], but there’s still so much information we need in order for us to put together a full structure.”