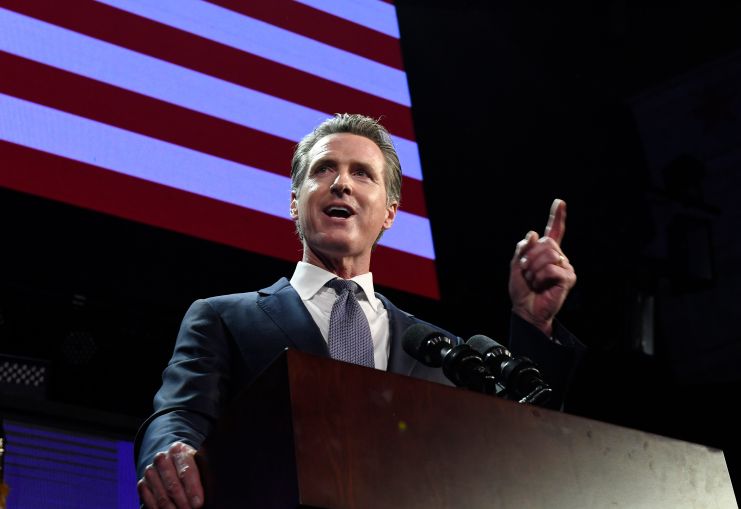 Real estate was on Gavin Newsom’s mind during his swearing in ceremony in Sacramento on Monday.

“No one should live in constant fear of eviction or spend their whole paycheck to keep a roof overhead. We will launch a Marshall Plan for affordable housing and lift up the fight against homelessness from a local matter to a state-wide mission,” he vowed.

Former president Harry Truman signed the Marshall Plan, also known as the European Recovery Program, into law in 1948 to aid Western Europe, by providing $12 billion in economic assistance after the end of World War II.

A spokesperson for Gov. Newsom did not respond to a request for additional information on the implementation of his version of the Marshall Plan.

He also promised to address the gulf between the rich and the poor in the state and to tackle the crushing homeless crisis, which he said, “should keep each and every one of us up at night” as well as the rising costs that make paying for “rent, utilities, visiting the doctor” out of reach for many Californians.

During his campaign, Newsom said he wanted developers to build 3.5 million homes from when he takes office through 2025, which The Los Angeles Times pointed out would be an unprecedented building boom compared with modern California history. He wants a fivefold increase in a state tax credit to finance low-income housing, bringing the state budget cost to $500 million a year, as Commercial Observer outlined last June.

Newsom also didn’t shy away from squaring off against the current administration in Washington, which he characterized as “clearly hostile to California values and interests.”

“We will offer an alternative to the corruption and incompetence in the White House,” he said during his inaugural address. “Our government will be progressive, principled and always on the side of the people.”

Sherry Bebitch Jeffe, a retired professor of public policy at the USC Price School of Public Policy and California policy expert, told CO that Newsom, like his predecessors did in their inaugural speeches was “large on broad agenda items and very, very light on questions of funding all these items,” which will be answered, in part, when he releases his initial budget proposal tomorrow.

“The thing that struck me as much as anything is he pretty much stuck to the progressive agenda,” she said. “He pretty much danced with the interest groups that [elected] him, but there are a whole lot of events and situations that may occur that may derail any hope he has of being able to fund what he would like to fund—wildfires, floods, earthquakes, natural disasters, economic downturn.”

Reality, she added, will begin to set in when Newsom releases his budget proposal and more so come May when it’s finalized.

“Just because we’re a one-party state, doesn’t mean that everyone is singing ‘Kumbaya,’” Jeffe said. “Every legislator has an agenda. The governor has an agenda. There are different shades of the Democratic party, different groups involved, the [moderates, known as the] ‘Mod Squad,’ which is far more business-oriented than strict progressive Democrats.”

How Newsom plans to get commercial developers on board with his plans to generate thousands of units of affordable housing remains to be seen, but he has support among officials who have been on the front-lines of the housing and homeless crisis.

“The high cost of housing is the core driver of the homelessness crisis in Los Angeles County, which has one of America’s least affordable housing markets,” he said. “Rents have risen much faster than incomes in L.A., and people who are homeless here cite economic factors as the number-one reason they became homeless.  I look forward to working with the governor to realize this essential goal.”