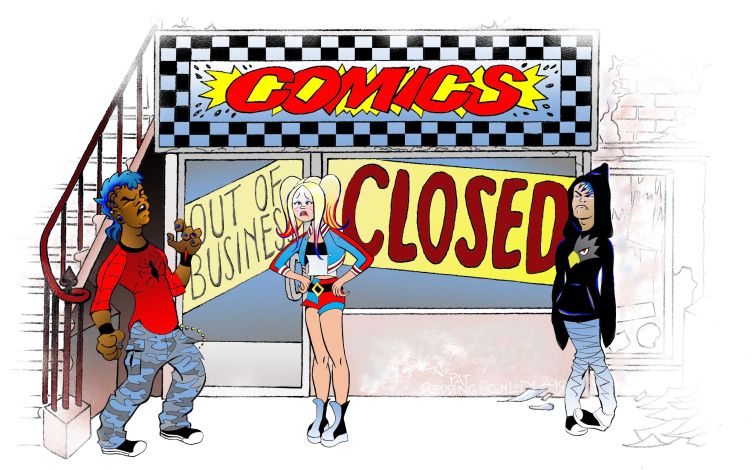 It landed—POW!—like a slug to the gut on New York’s comic book scene: St. Mark’s Comics, the East Village fan favorite, is closing at the end of the month following a 30-plus-year run.

“There are lots of obstacles to running a retail storefront in New York City; too many of them at once to fight,” St. Mark’s Comics proprietor Mitch Cutler said on Facebook at the end of January, “and after 36 pretty intense years, not enough left to fight them.”

To a certain extent, the forces aligned against Cutler’s 2,000-square-foot shop at 11 St. Mark’s Place are the same as those experienced by any other retailer.

Those include rising rents and competition from online shops. But one thing that probably hindered St. Mark’s Comics was a key part of its appeal: its lack of frills and extras.

The store is an “example of what a classic comic store is like from ‘The Simpsons’ and on ‘The Big Bang Theory,’ ” said Dimitrios Fragiskatos, the owner of Brooklyn’s Anyone Comics. He called the store “a product of [its] time.”

At JHU Comic Books, “to keep yourself alive” means selling a wide variety of materials for readers of all ages, said Nick Purpura, a co-owner of the company, which has an 800-square-foot outpost at 481 Third Avenue in Murray Hill and a 1,500-square-foot Staten Island store at 299B New Dorp Lane. Because it’s larger, the Staten Island store has a kids’ table in the front plus a table in the back for gaming, he said, but at both stores “we’re very reader-friendly.”

When Fragiskatos opened his Anyone Comics in 2017, he knew that he needed to offer more than just comics, so in addition to having his 800-square-foot shop on the ground floor he has 800 square feet below grade for events. Those events “are more adjacent to comics, like Dungeons & Dragons,” and draw a wider audience. Events have included drink and draw with models in comic costumes, as well as kids’ classes to learn how to create comic books.

Unlike St. Mark’s Comics, Anyone Comics doesn’t aim to have all back issues of a certain Marvel or DC series—the competition with the internet is way too fierce in that realm—and it sells local artists’ work.

In 3,000 square feet at the base of 830 Broadway near Union Square, comic book store Forbidden Planet “kills it,” said Newmark Knight Frank’s Jeffrey Roseman, who represented the landlord, Stephen Green of SL Green Realty Corp., in the lease there more than a dozen years ago.

Reflecting back, Fragiskatos said: “I did most of my comic book shopping [at St. Mark’s Comics] as a teenager. I love those guys, but in order for comic books to evolve, the market shouldn’t be ‘me’ anymore; [it should be] people who don’t see themselves as comic book fans.”

With only about 30 comic book shops in New York City, the loss of one is significant.

A young comic book reader and collector said that while he has only been to St. Mark’s Comics once—a few weeks ago—its closure is disturbing.

“It matters to me because it’s a comic book store,” said 10-year-old Oliver Elkies, who is so impassioned about the benefits of comics for children that last fall he wrote a 900-word essay on the topic for school. (He is also this reporter’s nephew.)

Purpura believes that “comic book stores are as important to America as jazz and baseball.” The buff added: “It’s an American art form. It was invented in America, spears our imagination and takes us in a different direction.”

Part of St. Mark’s Comics’ downfall could be its location.

“St. Mark’s is one of those streets unfortunately that is sort of stuck in the 90s,” Roseman said. “Nothing has changed there in a long time.”

But beyond that, “you’ve gotta freshen up your store,” Roseman added. “He probably hasn’t done too much to it in a long time.”

In addition to the typical issues that beset today’s retailer, the comic book industry has its own particular concerns. For example, ordering has become more restrictive.

“The business of the industry has been changing the last couple of years,” Purpura said. “An extremely large amount of product is being put out at one time. There’s a new publishing company coming out all the time. Marvel puts out three or four titles for one character, watering down the whole property situation.”

Plus, beyond e-commerce, he said, larger non-comic-focused businesses are taking a bite out of the business of independent comic book stores.

“There are places like Walmart and ​GameStop that have been trying to get into our business for years and siphon off what we do,” Purpura said. This point was driven home when DC Entertainment signed a deal with Walmart for an exclusive line of comic books last year.

It’s not that comic books or comic book stores as a whole are disappearing. New shops like Anyone Comics are cropping up.

Less than two years ago, Anyone Comics opened at 1216 Union Street in Crown Heights, Brooklyn, and business has been on the rise since, according to Fragiskatos. In 2018, he said he saw a 35 percent increase in business, and this January, business was up 25 percent year-over-year, with this February starting off strong.

Obviously the internet impacts the comic book business, but the online experience certainly doesn’t replace the one found in physical stores.

“I prefer to get them [in a physical store] because with Amazon there’s a chance they could get wrecked in the mail,” Oliver said. “I trust the comic book store because they know what they’re doing with the books so I can expect them to have good-condition comic books for collecting or just reading.”

Comic book store owners talk about the sense of community in the store, the ability to pick up and leaf through a magazine, the easy conversations between like-minded customers and the ability for owners and employees to offer readers good recommendations.

“Comic books are very much like a vinyl record,” Purpura said. “You want to touch it, read it, put it in a book shelf.”

And at the end of the day, an avid consumer like Oliver—who doesn’t have a lot of same-age friends with his level of comic book appreciation—can feel right at home in a comic book shop because, as he put it, “everybody there likes the same thing I do.”

CBRE’s Stephen Siegel on How COVID-19 Is Impacting Retail, Restaurants and I-Sales