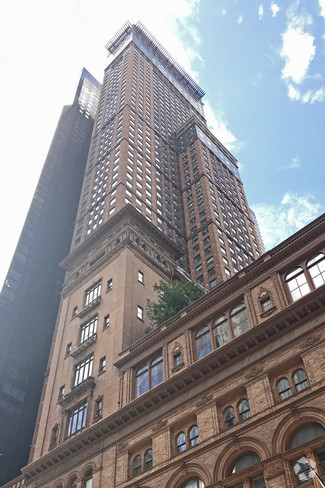 Naftali signed a 10-year lease with TF Cornerstone for 8,455 square feet on the entire 45th floor of the 60-story building at 152 West 57th Street between Avenue of the Americas and Seventh Avenue, according to Lee & Associates NYC, which brokered the deal for the tenant.

A spokeswoman for Lee & Associates would not provide asking rents, but CoStar Group data show average asking rents in the building are $77 to $95 per square foot.

Naftali currently has 4,500 square feet at 1700 Broadway between West 53rd and West 54th Streets and plans to move to Carnegie Hall Tower on May 1, according to a Lee & Associates spokeswoman.

“Naftali Group’s rapid growth necessitated a larger office space, and as major players in the business of real estate, the team looked at over 30 spaces before settling on Carnegie Hall Tower,” Lee & Associates’ Corey Abdo, who handled the deal with Ari Waldman and David Toran, said in a statement. “Their new office allows them to stay centrally located in Midtown, in close proximity to many of their New York City projects.”

Newmark Knight Frank’s Matt Leon represented TF Cornerstone in the deal. A spokeswoman for NKF did not immediately respond to a request for comment.

Naftali Group was founded in 2011 by Israeli immigrant Miki Naftali and its portfolio has more than 30 projects in New York City, Los Angeles and Singapore, as CO previously reported. It includes the residential building at 210 West 77th Street and the 12-story 200 Franklin Street in Greenpoint, Brooklyn, one of the tallest buildings in the neighborhood.

Naftali said in a statement he was “excited” about the company’s next phase.