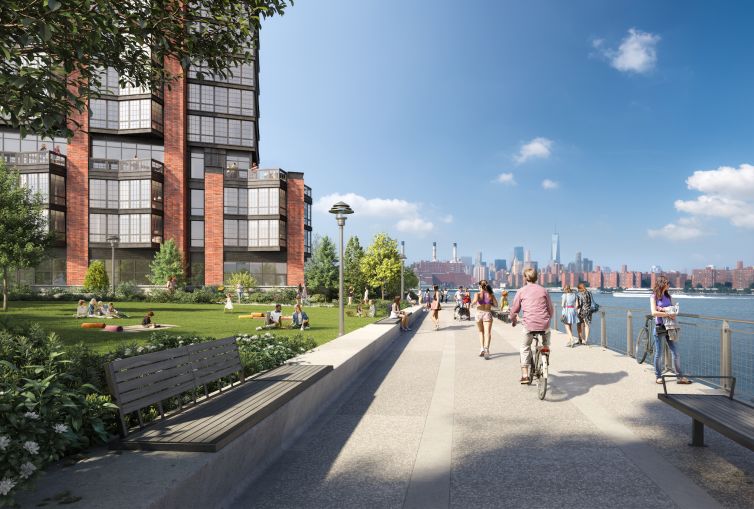 A rendering of waterfront park space at Greenpoint Landing, with 37 Blue Slip in the background. Photo: CoStar Group

This deal refinances a portion of a previous $75 million land loan that ICBC provided to Brookfield in 2015 for its $59 million and $46.5 million purchases of two vacant sites on Commercial Street from partner Park Tower Group that created the joint venture partnership between the two for Brookfield to develop the sites.

One of the two vacant lots purchased in 2015 now houses the completed 30-story residential building at 37 Blue Slip—also called One Blue Slip—the first tower to rise as part of the 10-building Greenpoint Landing mega-project. This new financing package funds construction on 41 Blue Slip—also called Two Blue Slip—which will be a 39-story tower situated right next to 37 Blue Slip on Brooklyn’s East River waterfront.

There was also a $45 million project loan included in the new package, which funds soft costs and construction, as well as a roughly $130 million building loan, according to sources with knowledge of the deal. The three-year debt facility includes a one-year extension option, sources said, and it closed on Dec. 20, 2018. The debt wasn’t brokered.

This was Intesa Sanpaolo first ever multifamily construction deal in New York City.

The quartet of international lenders split the $217 million evenly into prorated shares, sources said. Scotiabank acted as the lead administrative agent in the deal, representing TD Securities (Toronto-Dominion Bank) and Intesa Sanpaolo, who were brought in to participate in this construction financing following the initial debt supplied for the purchase of the sites.

Designed by Handel Architects, the planned building at 41 Blue Slip will comprise approximately 448,000 square feet and 420 apartments. It’s set to be completed by the second quarter of 2020, sources said. When completed, Greenpoint Landing will feature around 5,500 apartments, 25 percent of which will be affordable, as well as retail, public park space and a school. The site of the master-planned mega-project was opened for residential development by the 2005 Greenpoint-Williamsburg rezoning.

“Brookfield is excited to partner with Park Tower Group to help realize its vision for Greenpoint Landing,” Ric Clark, Brookfield’s chairman, said in a statement at the time of the June financing. “We look forward to our continued work together on this transformative project.”

ICBC and TD Securities declined to comment. Two Scotiabank representatives did not respond to an inquiry.