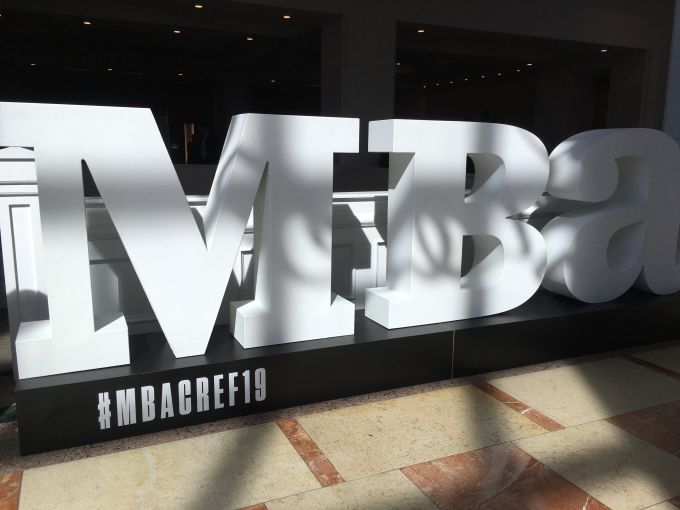 A sign near the entrance to the Mortgage Bankers' Association conference in San Diego. Photo: Matt Grossman/ for Commercial Observer

The last decade has marked a great business cycle for lenders of all stripes. But bank executives at the Mortgage Bankers’ Association‘s conference in San Diego yesterday betrayed a sense of wariness that they’re being squeezed out of the running for good returns on palatable deals.

Uneasy omens are ubiquitous, institutional lenders declared, during one morning panel that was punctuated with nervous laughter. It was fitting, CIT‘s Matt Galligan joked, that questions from the audience were projected on a screen that loomed behind his back at the moderator’s lectern.

“In the office these days, I’m always looking over my shoulder,” he quipped.

Indeed, banks’ feistiest competitors, debt funds, have evolved from their past role plugging gaps in the lending landscape to a position of directly challenging banks’ bread-and-butter lines of work. Their encroachment deeper into the space of long-term lending has created a rip current which has forced banks to focus primarily on treading water, rather than growing their books.

Funds have been making inroads into institutional lenders’ traditional territory for years. But it’s rare to hear a banker acknowledge so directly how the rise of investor-driven lenders have altered the competitive picture. Large-balance institutional lending used to be rarified air, but the MBA panelists acknowledged that by swarming that territory, debt funds have increasingly seized business that big banks could once count on.

An illustrative moment came when Michael Lindgren, chief lending officer for smallish Cambridge Savings Bank, addressed the challenges of running a small-balance lending operation in Boston, which he described as “the most overbanked market in the country.” Not willing to hand out high-leverage debt, Cambridge has been forced to compete on price, Lindgren said, sometimes taking on construction debt at spreads of around 200 basis points above Libor.

Once upon a time, narrow margins like that might have been limited to down-market business: Big banks could soar above such spread compression by originating big-ticket debt that few standalone sources could afford.

“I would say, ‘rest easy,’ ” Marcy Fink, an executive at SunTrust Bank, told Lindgren. “We’re not seeing spreads in the 300s or 400s either.” For SunTrust, too, she said, competition has driven down income dramatically.

An added challenge is that with so many medium-term loans from a highly active decade coming due each year, banks are having to do more work than ever before just to keep their balance sheets the same size.

“We had a record year last year—but all said, we only grew [our balance sheet] 2.5 to 3 percent,” Fink said. “It was a lot of running to stand still or grow slightly.”

Citing concerns about the significant difficulty in finding attractive leads that combine plum returns with conservative underwriting, the panelists’ other two bankers were equally dour.

“Originations were down in 2017 and down in 2018, and I suspect they’ll be down in 2019 as well,” Reimers said. “In our view, the opportunities out there are few and far between. Absent a chance in economic conditions, it’s hard to see us in a growth world.”

Lindgren said he could commiserate as well.

The ever-growing debt-fund bogeyman has forced institutional lenders to consider whether they’re inadvertently helping their foes along. Big real estate debt funds often keep credit accounts with major real estate banks to ensure they have the liquidity they need to do deals, and the panel’s bankers admitted that providing that service could be a double-edged sword.

“There’s a long list of stupid things we do to ourselves, and maybe that’s on it,” Reimers said. “Most of the debt funds are good customers of ours. Are we creating some liquidity on one side that can be used against us? Yes.” But that kind of repo lending is also an important business for J.P. Morgan, he said.

Fink said that SunTrust found itself weighing both sides of the same quandary too. Lindgren, on the other hand, sounded relieved to work at a bank too small to fuss with handing lines of credit to competitors.

“Our board couldn’t tell you how to spell ‘repo,’ ” Lindgren joked.

But though banks may be losing ground to debt funds in the race to build giant books of business, the panelists also contended that leading the volume standings isn’t necessarily the wisest game to play. If a downturn hits, they agreed, it’s best to have the cleanest balance sheet possible—not the biggest.

“We’re very, very diligent about our portfolio,” Lindgren said. Cambridge is doing its best to sign its favorite customers up for longer-term debt now, he said, so that the bank’s books will be full of loans against solid assets if the market falters.

Reimers echoed that focus on quality.

“We try to ignore what’s going on in the market, and work really hard to try to support our good clients without doing anything stupid,” he said. “There’s been a monstrous tailwind for seven or eight years, but it won’t go on forever. We want to make sure we’re not overexposed when the wind turns.”