All Quiet on the Brooklyn Office Front 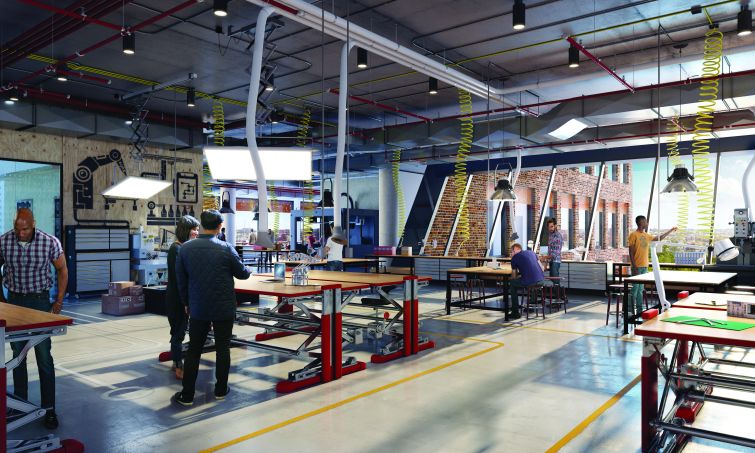 A host of new office space is set to come online this year in Brooklyn, including 25 Kent in Williamsburg. Rendering: Steelblue

For years, Brooklyn boosters have said the borough was going to be the city’s next big office market. Millions of square feet of new space are about to come online this year.

But 2018 proved a sluggish year for leasing in the borough, leaving some to wonder if Kings County developers bit off more than they could chew.

“The concern that people have is the supply in Brooklyn and who is going to take this supply,” said Craig Caggiano, an executive director at Colliers International who works on the firm’s market reports for the borough. “The number of migrations from Manhattan to Brooklyn has been steady, but there hasn’t been a large number of them and what there has been has been relatively small in size.”

A CBRE report found that the volume of office leasing in Brooklyn dropped 22 percent to 2018 from 2017 and leasing activity between the third and fourth quarters of 2018 slipped 37 percent.

“It’s a little quiet,” said Nicole LaRusso, the director of research for the tri-state region at CBRE. “It’s not unhealthy, it’s just not as robust as perhaps people were anticipating.”

LaRusso pointed out that the market still leased a total of just over 1 million square feet in 2018, marking the fourth year in the row the borough was able to crack the 1-million-square-foot mark. The report found that Downtown Brooklyn, Williamsburg and Greenpoint were the strongest neighborhoods, with the latter one accounting for 35 percent of all leasing activity in the fourth quarter of 2018.

But the CBRE report also found that year-end absorption in the borough was at negative 1.3 million square feet due to several redevelopment projects that came online in 2018, and the number could grow in 2019.

“Overall Brooklyn has a lot of supply coming online,” said Newmark Knight Frank’s Whitten Morris. “We all know that. And it’s spread amongst Industry City, Downtown Brooklyn, The Navy Yard and Williamsburg.”

Nearly a dozen major projects are set to come online throughout the borough next year including Rudin Development and Boston Properties’ 675,000-square-foot Dock 72 office building in the Brooklyn Navy Yard, Rubenstein Partners and Heritage Equities’ 500,000-square-foot office manufacturing and retail project 25 Kent in Williamsburg, and Tishman Speyer and HNA Group’s addition of 620,000 square feet of office space on top of the Macy’s store in Downtown Brooklyn.

“People are like a kid in the candy store,” said Timothy King, a co-founder of Brooklyn-based CPEX Real Estate, adding people have been reluctant to sign leases. “There’s so much stuff to look at.”

Part of the issue with the new office development is that it’s not geared towards companies actively looking for space in the borough. Those are smaller companies already based in Brooklyn that need 10,000-square-foot office spaces (or less), which has become hard to come by, said veteran Brooklyn office broker Chris Havens.

“A lot of this new development is for [tenants] leaving Manhattan,” said Havens, a managing director at TerraCRG. “The new product is not going to help your Brooklyn tenants. We need a lot more affordable space.”

“You have to see more migration of Manhattan tenants. There’s not enough [Brooklyn-based] demand,” LaRusso said.

A Colliers report showed the number of relocations in 2018 trudged along at the same slow and steady pace of the past few years with the biggest moves being nonprofit The Vera Institute of Justice’s 35,000-square-foot relocation from the Woolworth Building to Industry City in Sunset Park.

“There isn’t some sort of a large-scale demand in terms of the number of tenants people might have expected given the investment in the Brooklyn market and the number of projects,” Caggiano said.

One of the problems is that the newer developments post rents similar to ones found in Manhattan, with some asking in the $70s per square foot, taking price savings off the table. (Some rents in Empire Stores have even reached the $80s.)

“There are certainly spaces in Manhattan that rent for less than that,” said LaRusso. “The new developments have made it more expensive.”

Location is another issue; while office space in Downtown Brooklyn and Williamsburg have been trading briskly, areas that have limited subway access, like the Brooklyn Navy Yard or Dumbo Heights, have lagged behind.

Despite the challenges, not everybody’s counting Kings County out. Havens noted it only takes a few 100,000-square-foot leases to push it back to an upswing.

“Brooklyn has never been a high-velocity market,” he said. “Stuff that’s priced right and stuff that’s interested in good locations will definitely rent.”

LaRusso said she still feels positive about the Brooklyn market, with 2019 already looking to be off to a good start and urged patience around the new office space coming online.

“There’s certainly a healthy demand,” she said. “It will take some time for the market to work through the supply that’s available.”

And King expects that since Kings County has office product that can compete with Manhattan for the first time, a big accounting firm or law firm will open the flood gates this year and sign a major lease.

“You’re going to see somebody making a first move and then after that they’ll be a tsunami of stuff,” he said.