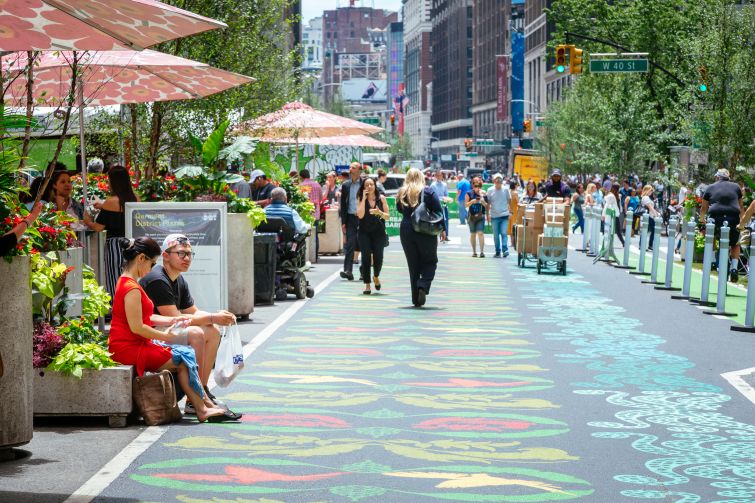 After years of wishing, hoping, and endless campaigning, the revocation of 32-year-old restrictions on non-fashion tenants in the Garment District has many there excited for the area to finally reach its full potential.

“I think the change is going to be profound,” said Barbara Blair, president of the Garment District Alliance. “Once the news permeates the way people think about Midtown, that the zoning’s been lifted and there are destinations here in terms of dining and bars and afterwork places, there will be an accelerating impact.”

Many are praising the new rules, which technically amount not to a rezoning, but a lifting of restrictions. In December, the City Council approved a comprehensive plan that, among other goals, sought to promote commercial office expansion in the Garment District. Among the provisions passed was the revocation of a 1987 provision requiring landlords among many of the neighborhood’s side streets to preserve at least as much space for manufacturing tenants as they did for new office conversion.

This provision hamstrung many owners, especially since the demand for manufacturing was not what it had been in the past.

“The area was preserving a tremendous amount of space for apparel manufacturing, which has been in decline, nationally, statewide, and citywide, for over 40 years,” said Blair. “So essentially, you were holding Class B and C office space off the market in midtown Manhattan. That space did fill up, but now you’ve got non-compliant uses throughout the area, which is ridiculous. It just didn’t make sense. What we wanted was to release the space, and normalize the tenants that were here already.”

“The feeling has been that the zoning held back the development of the Garment District,” said Ira Fishman, Partner at HSP Real Estate Group, which owns three buildings in the district. “When you have to have manufacturing in an area, then office tenants don’t want to be there, and the people who work in the buildings affect what the retail is. Low income wage earners don’t spend the amount of money that higher income office people spend, so that means less restaurants, and less utility to serve the office population.”

As Blair alluded to, landlords brought in office tenants over the 50 percent requirement, regulations be damned. But now, they can officially seek out office tenants with an eye toward creating a fully office-friendly neighborhood.

“You’re going to see more capital put into buildings. You’ll see more elevators, lobbies, bathrooms, and floors renovated to attract TAMI tenants,” said Bob Savitt, Founder and President of Savitt Partners, which owns and/or manages seven buildings in the area. “This is just on the side streets, because there was no zoning requirement on the avenues. Most avenue building owners have already spent a lot of money renovating their buildings to attract non-fashion tenants.”

The change in the regulations will further an evolution that has been in the works for years, as major companies have taken space in buildings along the unrestricted avenue blocks. 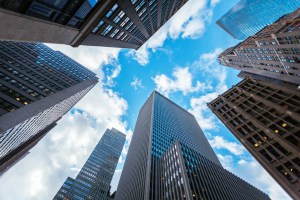 “Ten years ago, this area was 90 percent fashion. Today, it’s 30 percent. It’s moved really quickly in the last few years,” said Savitt, who mentions several major companies that have taken significant space in the area within that timeframe, giving the neighborhood’s status as an office-friendly environment a boost.

“That’s a huge statement,” he said, “because they’re only attracting tech and creative tenants.”

The influx of office tenants in the Garment District over the past decade has already had a profound impact on other aspects of the area.

“The impact of the businesses that have come here over the last ten years is that the side streets are opening up,” said Blair. “We have [more] cafes and restaurants. We have major hotels even on the avenues, like the Moxy (at 485 7th Avenue). We have over 16 rooftop bars. And, you’re in the middle of the transportation triangle there.”

“The retail has been completely transformed,” said Savitt, discussing area dining by way of example. “You’ve got every dining experience here now, from fast casual to Wolfgang’s and Keens and the like. You have a lot of options.”

On the topic of how area retail has been enhanced, Blair mentions buildings owned by Empire State Realty Trust. Their 1333 Broadway has brought Shake Shack, Urban Outfitters, and Dr. Martens to the area, while their 1359 Broadway has added Wolfgang’s Steakhouse, Papyrus, and fresh&co to the list of local restaurants and retailers.

“The retail on Broadway is totally filled in,” said Blair. “Fifteen years ago you had dynamic retail in Times Square and on 34th Street, but you had nothing between 35th Street and 41st Street. Now, that has all changed.”

While the lifting of the regulations furthers a physical shift that’s been happening in the area for a decade, it also enables a change in public perception. The new rules will encourage people to view the Garment District as a place to do business in many industries, then stay for dinner and drinks after, echoing the transformation of the Meatpacking District after the meatpackers left. 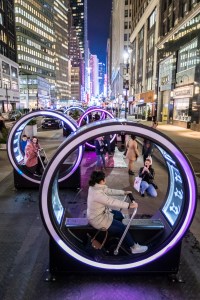 “It’s been very slow, because up until now if you came here, you were taking a chance – you [might not be in] compliant use,” said Blair. “But the new business sectors that have been trickling in over the past 10 years are all legitimized now. I think you’re going to see a big improvement on the quality of tenant here.”

Steve Boxer is the president of Pachyderm Consulting, which provides IT solutions and support services. Founded in 1997, the company, which Boxer said has about half-dozen employees, moved to its current Garment District location at 66 West 38th Street around ten years ago. Boxer’s views of the area, and of the zoning questions, illustrate how the regulations affect smaller businesses as well, and steer perception of the area in way that could determine its future.

At the time he moved his business to the Garment District, Boxer chose the area to be closer to his clients.

“We’re managed service providers. Being close to our clients is critical,” said Boxer. “If people had system outages or emergencies, we wanted to be close or it could be ballgame over. We knew it was much easier to access our clients by being more centrally-located. You don’t realize how great it is until you don’t have to walk 10 minutes to the subway.”

In addition to convenience, Boxer viewed the Garment District as a burgeoning neighborhood exhibiting impressive growth, with potential for more on the way.

But Boxer, who has a master’s degree in urban planning from Columbia, saw the zoning restrictions as a potential impediment to the long-term growth of both his business, and the Garment District as a powerful business center.

“I thought the zoning was restrictive,” Boxer said. “Loosening the restrictions in the Garment District is going to mean more opportunity for my clients to find available space in what is now a hot neighborhood, and it’ll make it easier for me when it comes time to expand. One of the benefits of the zoning changes is that a lot more office space will be available. So I had a very personal business reason for wanting the changes in zoning.”

Boxer feels strongly that the city should be doing everything it can to encourage more businesses to move here – which is exactly what the new elimination of the restrictions does.

“[The city should] stay out of the way of people and businesses that are coming to the Garment District,” said Boxer. “These businesses add to the fabric of the neighborhood. Zoning shouldn’t be keeping business away. It should be encouraging it.”

Fishman sees this new encouragement extended to larger companies that might have shied away from Garment District side streets due to the prior restrictions.

“There are certain larger institutional owners who were afraid to come into the area because they didn’t want to be in default of the city’s zoning laws,” Fishman said. “Technically, most of the buildings were in violation, because they were not following the restriction. Most buildings were ignoring that and instead of going half office, they were going 75 percent, 80 percent office. At the same time, the garment businesses were disappearing. They were leaving the city and going overseas. Owners had no choice but to rent to whoever else was out there.”

Anticipating the removal of the regulations, Fishman has already upgraded his buildings in the neighborhood.

“I put in a new lobby at 242 West 38th Street in anticipation of this going through,” said Fishman, who is managing partner at that building and at 347 West 36th Street. “We spent a lot of money there to build a beautiful lobby to attract office tenants. If I didn’t, I’d have a hard time renting space. You’re gonna see new lobbies throughout the Garment District. You’ll see buildings being renovated, new windows, and new elevators.”

Fishman sees all this as essential for bringing in the desired TAMI tenants.

“Our plans are to try to work with the tenants of the future – office tenants, technology companies, TAMI tenants. We hope the Garment Center will be seen as the next Meatpacking District,” he said. “There’s not one meatpacking tenant left there, but they still call it the Meatpacking District.” 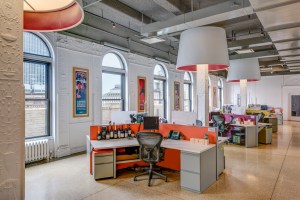 With zoning changes in place, the Garment District is primed for an office climate that encourages further growth while reflecting the reality of the growth that occurred in spite of them.

“We have the highest job numbers in the Garment District that we’ve had since 1995, when the Alliance started tracking job numbers,” said Blair. “In 1995, we had around 64,000 jobs here. Now, we have 134,000 jobs in the Garment District, and every single one of the new jobs is in new business sectors like tech, media, business services, creative, or nonprofit. So that’s what really drove it. We wanted to welcome new businesses to the neighborhood legitimately.”

That all said, the zoning changes also account for preservation and furtherance of the district’s fashion/garment legacy.

According to the city press release announcing the changes, “non-zoning tools will preserve garment manufacturing space, with mechanisms including a customized tax incentive program that requires property owners to provide long-term, affordable leases for fashion manufacturers; and funding support for the public-private acquisition of a building to permanently house garment production.”

“There is still a significant cluster of fashion in the Garment District,” said Blair. “Mostly it’s showrooms, design, marketing, and sales, but there is some manufacturing that’s still here, and the industry feels very strongly about ensuring that the cluster is viable.”

The result of all this action is a neighborhood that those involved feel is finally equipped to reach its full potential, mixing the best of what New York City has to offer in terms of office accommodations, restaurants, and retail.

“After 31 years, we now have a neighborhood that has a unique identity,” said Blair, “but that blends with the rest of Manhattan’s Central Business District the way it always should have.”