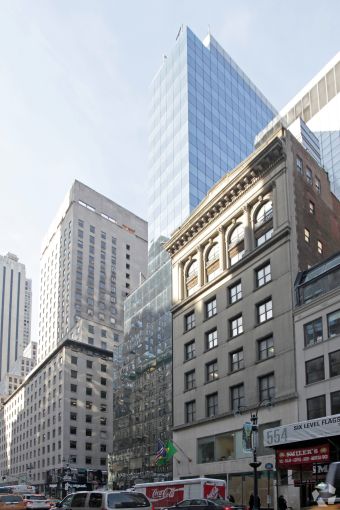 HQ by WeWork, the arm of WeWork dedicated to mid-sized businesses, signed four leases in Manhattan totaling close to 110,000 square feet, primarily in Midtown South, according to information from the company.

The coworking firm, rebranded The We Company, signed leases at four buildings, three of which are within several blocks of each other in NoMad. The company took 41,200 square feet at Chestnut Holding’s 49 West 27th Street, 28,500 square feet at Hilson Management Corp.’s 185 Madison Avenue and 19,500 square feet at The Kash Group’s 29 West 30th Street. The final lease, closer to Midtown, was for 20,270 square feet at Safra National Bank’s 546 Fifth Avenue.

Two of the locations are expected to open this quarter, and two more in the summer.

In addition to the Manhattan locations, HQ signed two leases in San Francisco for a combined 55,000 square feet.

HQ by WeWork launched in August 2018 and provides office space for companies with more than 10 and fewer than 250 employees.

The effort to close these details was led by Arash Gohari, an executive vice president at WeWork, and the company worked with different brokers for each tenant. Eric Cagner and Bernie Weitzman from Newmark Knight Frank represented Chestnut Holdings, Savills-Studley’s Andrew Zang represented Hilson Management Corp. and Christel Engel from Colliers International represented The Kash Group.

A spokesman for WeWork declined to provide asking rents in the buildings or the lengths of the leases.

According to the Wall Street Journal, WeWork CEO Adam Neumann is making millions off of real estate he leases back to his company. WeWork reported that it had paid more than $12 million in rent to buildings “partially owned by officers” between 2016 and 2017, according to a prospectus WeWork published last year cited by WSJ.