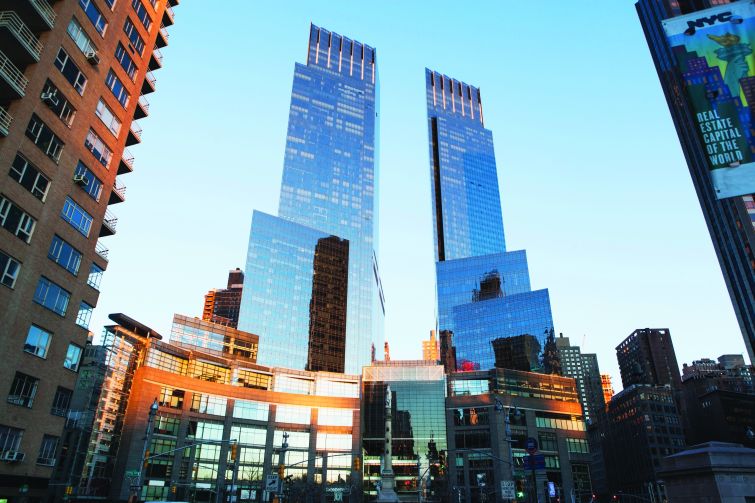 After nearly a year of rumors, Deutsche Bank made it official last month and signed a lease for 1.1 million square feet in the two-skyscraper complex at One Columbus Circle.

The deal will bring more than just new faces into the neighborhood when the bank moves into all the available space—except the 20th floor—in 2021. The part mall, part hotel, part apartment building, part office building, part concert hall has been named the Time Warner Center for its more than a decade of existence, but will soon become the Deutsche Bank Center.

Deutsche Bank’s deal ended Related Companies’ four-year process of trying to find a new tenant after Time Warner announced it would move to the landlord’s other development, Hudson Yards. (Time Warner moves out in later this year.)

“We set the table for their departure and had plenty of time to anticipate their move,” Kenneth Himmel, the president and CEO of Related’s mixed-use division, Related Urban, told Commercial Observer. “It’s never easy to replace a million-square-foot tenant, I don’t care where you are.”

Related originally planned to find a 300,000- to 400,000-square-foot anchor tenant in the building and separetly lease the other floors, but Deutsche Bank, which was looking to consolidate into one location, took everything, said Peter Riguardi, the president of JLL’s New York region who worked on the deal for both sides along with colleagues Frank Doyle, Clark Finney and Ken Siegel.

“With Deutsche Bank’s 20-year lease and Time Warner’s 15 years, the building will never have a square foot of vacancy for 35 years,” Riguardi said. “It’s pretty amazing.”

While the Time Warner move will leave the space empty for about two years, Himmel said Deutsche Bank has nearly double the employees of Time Warner—6,000—and will bring much more people into the area.

“That’s going to be a real boom for us,” he said. “But we’re going to have to live through a couple of years of transitions.”

Those transitions are just the latest in the long history of the parcel of land between West 58th and West 60th Streets along Eighth Avenue that really kicked off in the 1950s when the Triborough Bridge and Tunnel Authority, a state agency infamous master builder Robert Moses used to fund and construct capital projects, planned to build a convention center there.

The land used to house a collection of small tenements, stores and office buildings—where one served as the National Broadcasting Company’s headquarters—but Moses needed to acquire it from many different owners and clear the buildings to build his center. To actually get that done, he designated the area a “slum” so the federal government paid for most of the land acquisitions under the Title I slum-clearance program, The New York Times reported.

So he would qualify for the program, Moses added a stretch of middle-income apartments covering 53 percent of the site to the plans.

Eventually, construction started on the 323,000-square-foot convention center in 1954 and was completed two years later, The Times reported. Moses dubbed the center the New York Coliseum as a nod to what he hoped would be his long legacy in the city.

“[Moses] named it the Coliseum very specifically because he wanted to be remembered as immortal as the Caesars of Rome,” Robert Caro, author of the Pulitzer Prize-winning biography of Moses, The Power Broker, told The Times in 2000. “He believed his works would confer immortality on him.”

The Coliseum—which was owned by the Triborough Authority until the 1960s when the Metropolitan Transportation Authority absorbed it—opened with the International Automobile Show, the National Photographic Show and the International Philatelic Exhibit. It exhibited everything from Egyptian King Farouk’s jewels to a three-ring circus during the Coliseum’s life.

However, it never got much love for its design, with The Times calling it “a low point for New York’s public buildings” and Art News categorizing it as “utterly pedestrian.” It also became known for its tight control by organized crime and corrupt unions, which charged exhibitors sky-high prices for simple tasks like changing a light bulb, the New York Daily News reported.

“The Coliseum belonged to us… I secured many jobs for people there,” mob informant Vincent “Fish” Cafaro told the FBI in the 1980s, according to the Daily News.

Aside from the mob problems, conventions got larger and quickly outgrew the Coliseum’s capacity and the Coliseum’s slow death started in 1979 when the city announced plans to build the larger Jacob K. Javits Convention Center, New York magazine reported.

“The Coliseum that was there was supposed to bring life to that corner but it never came,” said David Childs, the chairman emeritus of Time Warner Center architect Skidmore, Owings & Merrill (SOM). “People forget that coliseums were usually empty.”

New York Coliseum closed its doors in 1986 when the Javits Center was finished. The year before, the MTA put out a call for proposals to develop a building with ground-floor retail space, according to New York.

Boston Properties, then headed by co-Founder Mortimer Zuckerman, bid a whopping $455 million for the Coliseum site (almost $1 billion in today’s dollars) to build a new headquarters for investment-banking firm Salomon Brothers and won the chance to buy it, according to the New Yorker.

The plans were met with swift opposition from protestors concerned over its size and the possibility of casting shadows over Central Park, including Jacqueline Kennedy Onassis, the First Lady of the United States during the presidency of her husband, John F. Kennedy.

The Municipal Art Society of New York filed a lawsuit to stop the project and Zuckerman tried appeasing them by firing original architect Moshe Safdie and hiring SOM to come up with a better design, New York reported.

“It was massive because it piled all of its weight into the center,” Childs said of the original design. “I opened a hole in the center to let the sunlight through.”

The new look wasn’t enough to save the project. Salomon Brothers eventually pulled out of the deal and, after economic downturns, litigations and public outcry, Zuckerman abandoned the project in 1994, losing most of his $33.7 million deposit, New York reported.

But as that all played out, Related Founder and Chairman Stephen Ross stood on the sidelines waiting to get a crack at the site.

“Steve had his eye on this site for many years hoping someday it would actually come into the hands of the political bodies that could ensure that the development could happen,” Himmel said.

And Ross got his wish when Republican Rudolph Giuliani became mayor in 1994. Giuliani put out a second request for proposals in 1996 for the Coliseum, this time requiring space for Jazz at Lincoln Center, when Ross phoned up his old friend Himmel in Boston. Himmel flew to New York City that day and had dinner with Ross, who told him about his vision for the site, and by the time the plates were cleared Ross had convinced Himmel to come onboard.

“It didn’t take long at all,” Himmel said. “This was the quintessential opportunity to come into New York City.”

The plan that emerged would be for two 750-foot towers with office space, a 251-room Mandarin Oriental Hotel and 198 condominium apartments. It also had a 347,000-square-foot retail space dubbed The Shops and Restaurants at Columbus Circle.

But in order to bring this to the Upper West Side, Related had to beat out bids from nine other developers including Millennium Partners and current president Donald Trump.  AREA Property Partners, led by William and Richard Mack, backed the Related bid and the two firms co-developed the project.

“It was clear that whoever was going to win this bid had to be able to validate the ability to deliver the office component,” Himmel said. “That’s where I think we were very fortunate in how we went about identifying the key office tenant.”

Related caught wind that AOL Time Warner, as the media company was then called, was hunting for new digs, so the developer created a presentation for AOL about the plans for Columbus Circle and got the media giant to sign on.

Thanks to the AOL Time Warner deal, Related won the rights to develop the site, and paid $345 million for it, Himmel said. Related got to work designing the 2.5-million-square-foot complex and hired SOM to lead the change.

Keeping in mind criticism from the 90s designs but abandoning his original plans, Childs aimed to come up with a design that made it easy for people to get around the site while reinforcing Columbus Circle’s most defining feature—the circle itself.

“The street really defined the challenged,” Childs said, adding the Municipal Art Society approved his design. “Why not keep that form and let the ripples continue in the building?”

During the two-year design process, Himmel got to work on trying to convince retailers to lease space. His plan was to open high-quality restaurants on the upper floors of the project to draw people through the doors and have shops on the lower levels for them to stop in while there. However, not everybody was sold on that idea.

“Danny Meyer, Four Seasons and some of the better restaurants and chefs in New York had never believed we’d do the kind of volume we did,” Himmel said. “They didn’t think New Yorkers or visitors to New York would go to the upper levels of a project like that to eat.”

Himmel got one of his first big breaks when Thomas Keller agreed to open his gourmet restaurant Per Se at the property after nearly a year of negotiations and plenty of trips to meet Keller in Napa Valley, Calif. (Per Se would go on to pick up three Michelin stars, and other Michelin heavyweights like Masa Takayama followed suit with his eponymous three star restaurant, Masa, at Time Warner Center.)

Related eventually demolished Moses’ Coliseum in 2000 and after four years of construction, with some problems including a minor fire and fatal construction accidents, opened the doors to the $1.3 billion Time Warner Center in 2004.

The project and Himmel’s retail vision have been called one of the most influential construction projects in the city’s recent history, but not everybody has seen them as positive.

Still, it’s credited with upping the game of Upper West Side residential real estate with the nearby 15 Central Park West, built a few years later, and helped pave the way for projects like Brookfield Place in the Financial District to be successful by proving vertical retail can work in New York City. And, unlike the Coliseum, it’s a place that people now actually want to visit, Childs said.

“It did make an enormous change to the area,” he said. “It’s a great location now and that’s why I think it’s attractive to people.”