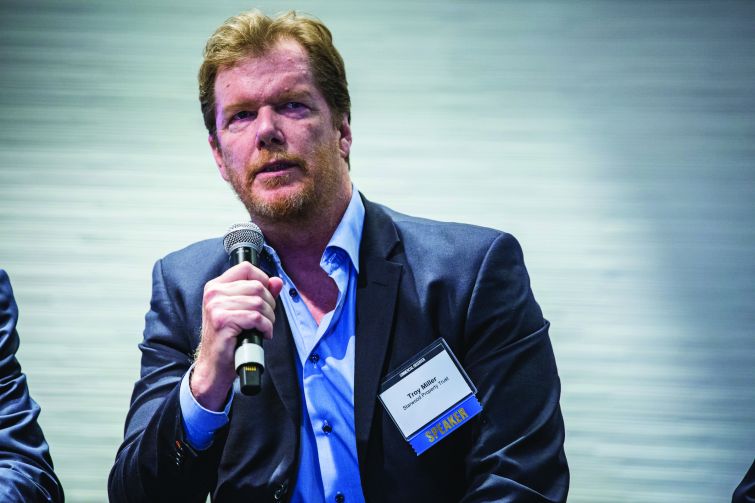 With the debt markets hotter than ever from coast to coast and cut-throat competition at every turn, lenders have to be on their A game. One such lender is Troy Miller, who heads up Starwood Property Trust’s West Coast loan originations, including senior and mezzanine debt as well as preferred equity investments. Commercial Observer caught up with Miller while at our inaugural L.A. finance conference in December 2018 to get his take on which projects are drawing capital in the City of Angels.

Commercial Observer: How would you describe L.A.’s debt markets today?

Troy Miller: The debt markets are extremely liquid and extremely active. There are fewer acquisition financings—there are still some, but not as many as we’ve seen in the last couple of years—but lots of activity in terms of refinancings and construction lending.

There are so many developments underway in Downtown L.A.

It’s crazy. We’ll see how it all works out; I’ve heard rumors that maybe one or more of the big projects are struggling a bit. There’s a lot of product that has been dumped on the market in a short space of time. The luxury condo market is slowing a bit—this happened Downtown in the last cycle, too—but this has been a very busy cycle; a lot of international capital has come to L.A., especially Downtown. That’s been new for us here.

Are you doing much construction lending at the moment at Starwood?

As we near the end of the cycle, are most borrowers executing their business plans in a timely fashion?

I’m seeing both ends of the spectrum. We are getting loan requests for deals where the sponsor is behind on their business plan—where a property is slower to lease up and stabilize—and the borrower is looking for a bridge to take them out of their construction loan or higher-priced transitional loan. We’re also seeing more deals that are outperforming the business plan and leasing up more quickly, because they’ve landed big tenants.

You lent $213 million on The Museum Building mixed-use development in Downtown L.A. in June 2018. What appealed about that particular lending opportunity?

I love that building, it’s got amazing bones and it’s in a great location. We did a bridge loan as the sponsor is still figuring out their business plan and what’s next for it, but it has unbelievable potential.

It’s being developed by two New York developers—Waterbridge Capital and Continental Equities. What’s the pull to L.A. for them, do you think?

The main pull is that the cost basis here is so much cheaper than New York. It’s [also] cheaper than San Francisco. So looking from a basis standpoint, The Museum Building looks very attractive. The bones of that building would not be built or replaced today, so it’s a truly unique building in a market that, from a global perspective, still looks relatively cheap. And it’s in a market where media and technology are converging with the content providers that are still gobbling up large blocks of space. I actually think The Museum Building has the potential to become the coolest building in L.A. once fully executed.

What will a development such as The Museum Building bring to Downtown?

This project will comprise retail plus creative office plus hotel. Downtown L.A. has very little creative office product and so this will deliver something that’s entirely different for the area. The Art District has some of these cool, creative office buildings that have been mostly leased up but Downtown has better access to amenities and transportation. It also has a 2.5-acre roof deck to go along with the hotel component, which gives the sponsors the ability to do events, restaurants and bars; it will be the most unique event space in all of Los Angeles. The retail component’s location is along Broadway, which is redeveloping as the new, cool retail corridor, across the street from a new Apple store and one block off 7th Street, which is restaurant row. It’s becoming the new center of Downtown.

Is there such a thing as a typical transaction for you at Starwood today?

It really varies. We continue to do high cash flow deals but they may need a little more leverage to get to our targets, and we have always differentiated with our credit-first culture of being able to underwrite large, complex business plans that require more future funding. Our vehicle sets up really well for both given our financing advantages.

Where are the problem areas in the market?

Retail is still tricky. We still look at it as part of mixed-use deals, as opposed to stand- alone retail which is difficult to finance right now. Other than that it’s more just a focus on underwriting these days, where we’re seeing peak numbers in a lot of segments. So, the trick is to figure out what your stabilized underwriting looks like and what a take-out loan looks like.