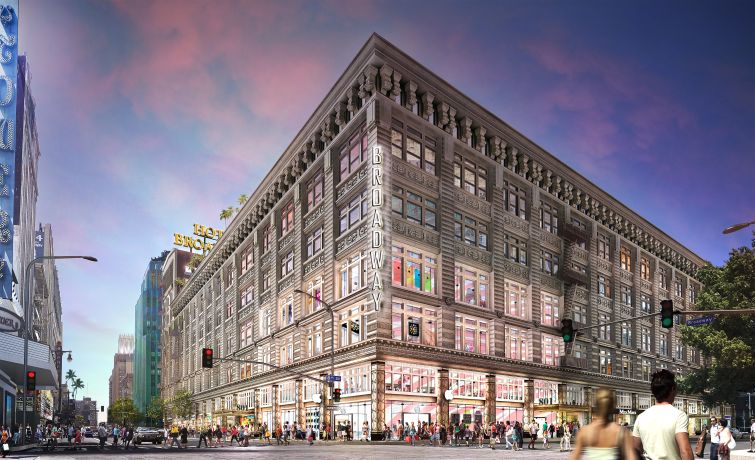 A rendering of The Museum Building. Courtesy: Waterbridge Capital

Starwood Property Trust provided the 18-month debt, which acts as an interim/ bridge loan and recapitalizes a $165 million predevelopment loan provided by Jamestown in 2016.

The closing is part of $500 million in total financing currently in the works on the landmarked trophy asset, as first reported by CO in March. The next round to close will be an approximately $300 million construction loan on the property, expected to close over the next couple of months, sources said.

CBRE Capital Markets’ James Millon, Tom Traynor and Jesse Zarouk arranged the financing and are also charged with sourcing the construction debt. Officials at CBRE declined to  comment on the transaction.

The Museum Building—constructed in 1912 and formerly known as the Broadway Trade Center—was home to the May Company department store until the mid-1980s, then served as a mixed-use garment manufacturing facility with ground-floor retail.

Waterbridge Capital and Continental Equities acquired the asset in August 2014 and are now redeveloping it into a state-of-the-art mixed-use asset that will capitalize on the 24/7 live-work-play dynamic in Downtown L.A. Approximately 20,000 multifamily units are under development in the area, and retailers including Whole Foods, Apple, Nike, Shake Shack and Sweetgreen currently lease spaces immediately around The Museum Building.

The sponsors have spent past two years in the predevelopment stage, getting landmark approvals and putting a construction budget in place and—with the financing now underway—are now ready to kick off their redevelopment plan.

When completed, the property will include 358,000 square feet of office space, 409,000 square feet of retail space and a 117,000-square-foot, 186-key boutique hotel. The sponsors are said to be currently reviewing various proposals from hotel operators to run that component of the project, sources told CO in March.

Downtown L.A. is in the middle of a major tech resurgence, and the property meets demand for unique, large-plate, open-plan creative office space with its 114,000-square-foot floor plates and 25-foot retail ceiling heights. The building is already receiving significant creative tenant interest in addition to lenders interested in financing it, one source said.

Additionally, the building also boasts a 2.75-acre rooftop and is one of only two properties in Downtown L.A. permitted to utilize the space. And use it, it will; the development will feature rooftop restaurants and amenities, including a pool.