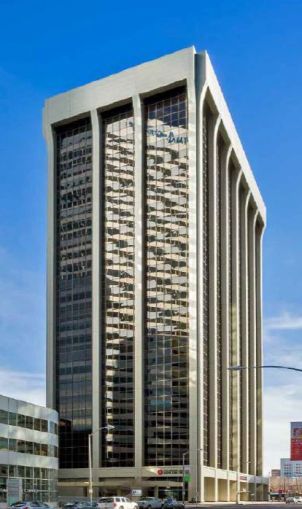 Nuveen Real Estate has acquired the Colorado State Bank Building at 1600 Broadway in downtown Denver for $111 million, the firm’s first office equity play in the area, according to Nuveen.

Nuveen, a global real estate investment manager and affiliate of TIAA, bought the 445,000-square-foot building from an affiliate of Irvine, Calif.-based LBA Realty, a firm that specializes in office and industrial assets.

“Denver is a target market for Nuveen Real Estate due to its strong demographics, skilled workforce and diversified economy and is well positioned to lead the nation in economic growth in the long term,” Andrew Pyke, a senior director at Nuveen Real Estate, said in a prepared statement.

Built in 1972, the recently renovated property was expected to fetch a price of around $150 million, the Colorado Real Estate Journal reported in October 2018.

At 93 percent, the 26-story property is nearly fully leased, according to information from Nuveen. It’s anchored by a branch of the Colorado State Bank and Trust and is located at the corner of Broadway and 16th Street in Denver’s central business district, nearby the Civic Center Station, a major artery for bus services in the area.

The building features a newly renovated conference center and fitness center, with showers and lockers, according to Nuveen. The property also has 321 parking stalls, with a new valet service.

“The uptown office market currently represents an attractive relative value for tenants … and we believe there will be a continued resurgence in the area as additional multifamily and retail is added,” Pyke said in a statement.

While the unemployment rate for metro Denver moved up to 3.2 percent—and 3.3 percent for Colorado—in November 2018, office-using jobs rose 2 percent year-on-year, according to a fourth-quarter office market report from CBRE.

Office market investment activity in Denver’s metro area reached $993.7 million in the fourth quarter of 2018, rounding out an annual sales total of over $3 billion on the year, per CBRE’s fourth-quarter  report. With that, Denver experienced roughly 2.9 million square feet of net office absorption in 2018, buoyed by a wave of new construction on the year—although 67 percent of new office construction was in the Denver suburbs.

Officials at LBA could not immediately be reached for comment.