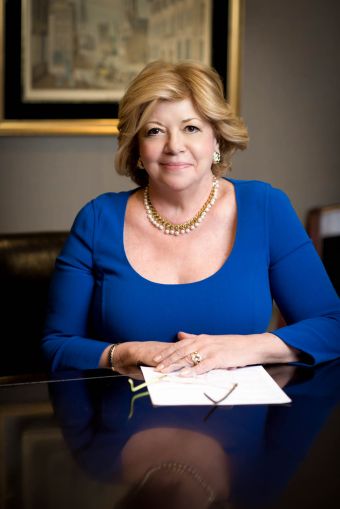 “Faith was the best PR person I’ve ever met.”

So said Linda Alexander of Alexander Marketing, who was Faith Hope Consolo’s publicist from 2008 to 2016.

“She would elevate some of the most mundane dry cleaners and framing stores [leases],” Alexander added. “She always found a kernel to market them so when we were marketing them they were the best and the finest. She was a master at kind of accentuating the positive.”

Consolo, the chairman of the retail division at Douglas Elliman, died on Dec. 23 at the age of 73 after having a heart attack in her Fifth Avenue home.

Love her or hate her, Consolo—in her designer dresses and perfectly coiffed hair—was a master at retail marketing (her slogan “You Need Faith” blared from empty storefront windows) and paved the way for women in the real estate industry.

Nikki Field, an associate residential broker at Sotheby’s International Realty, said that Consolo was a mentor to a lot of female agents in residential and commercial brokerage, who admired Consolo’s ability to “get down in the mud with her adversaries, but handle her clients with kid gloves.”

Consolo would remind Field to not “ ‘let the fact that you’re a women get in your way,’ ” Field said, adding: “She gave many of us permission to take off the silk gloves and put on the boxing gloves.”

The pair had a working relationship, with Consolo handling a commercial deal and then referring the client to Field on the residential side. Field liked to give her leads to Consolo because she felt confident the retail broker would fight like a “pit bull” for her clients.

One day, Field found herself before a developer who asked her, “ ‘Who do you think you are, Faith?’ I pushed harder.” After, Field called up Consolo and said: “I just got the biggest compliment ever.”

Consolo came under fire for her brashness and at times overstating her involvement in deals—which some say was because she was a woman—but it served her clients.

“As much as she was into marketing her name she used to really, really make sure the property owner knew how big and wonderful the tenant was,” said broker Joseph Aquino, who worked alongside Consolo for 26 years. (After Aquino left Elliman in 2015, he sued the company claiming it had withheld $1 million in commissions to pay for Consolo’s extravagant lifestyle, per The Real Deal. The suit was dismissed at the end of October 2016. “We all kissed and made up,” Aquino recently assured. “We had an amicable parting.”)

Arthur Wardally, the former CFO of Buccellati, said how instrumental Consolo was in helping the fine jewelry company negotiate a great deal a number of years ago when CIM Group approached Buccellati to buy it out of its lease at 46 East 57th Street.

Aquino said that he and Consolo “got [Buccellati] $4.4 million. Up until the last meeting Buccellati could only get $2.5 million from CIM.”

The pair also found Buccellati a temporary space on Madison Avenue for relocation. At the end of their dealings, Wardally remembers Consolo sending him a very nice bottle of wine.

Consolo’s clients ranged from fashion to food to fitness brands in the Plaza District up to Harlem. They included Cartier, Versace, Zara, Louis Vuitton, Fendi and Yves Saint Laurent, according to Steven James, the president and CEO of New York City for Elliman. She represented landlords like Donald Trump, Charles Cohen and Larry Silverstein.

“Faith was a driving and iconic force in New York City’s retail sector, one of the city’s most prolific retail brokers, and aptly known as ‘The Queen of Retail,’ ” James said in a statement. “Her contribution to the real estate world was immense, as she was tireless with her leadership roles in the industry, and a powerful model for women.”

Consolo, a Cleveland native, studied art history at New York University and attended Parsons School of Design, according to The New York Times. Prior to real estate, she started a modeling agency and then worked in interior design in Los Angeles, she previously told Commercial Observer. Consolo joined Elliman—where she had a seven-person team—in 2005 after about 20 years at Garrick-Aug Worldwide.

On the personal side, Consolo had close friends, a long-time partner who died in 2011 and no children. She was active in Commercial Real Estate Women New York, holding many titles there including president, and was on the board of the Association of Real Estate Women. She was a president of Women’s National Republican Club as well as a president of the Young Women’s Republican Club.

But her life was really her work.

Elliman broker and close Consolo pal Esther Muller previously told CO: “She had her work. She had her team. She cared about her deals probably more than anything else in the world. And that was it. Her work was her life.”

Elliman is holding a memorial for Consolo next week.