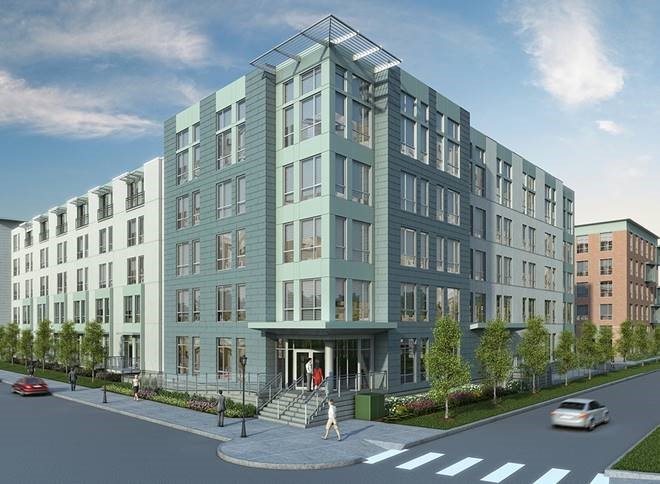 Willie Guo, a Boston landlord who runs Qianlong Development, has pinned down a $68 million loan to refinance an apartment building in the city’s Dorchester neighborhood, according to CBRE Capital Markets, which brokered the deal.

John Kelly, a CBRE executive who led the firm’s team for the deal, identified the lender as MF1 Capital—a bridge-debt platform, founded with CBRE’s backing, that sources funds from investors such as Limekiln Real Estate and Berkshire Group. Kelly didn’t specify the loan’s terms, but characterized it as a bridge loan to tide the development over until occupancy is higher. Construction finished in 2015, according to local news website Dorchester Report..

Known as Hub 25, the building at 2535 Morrissey Boulevard, stands blocks from Boston Harbor, near the peninsula that the John Kennedy Presidential Library shares with the University of Massachusetts Boston. The 278-unit complex includes an outdoor pool, a garage and a gym.

The complex’s design and amenity mix, Kelly said, was intended to set the project apart from workforce housing while also keeping the price tag below those of the city’s poshest rental apartments.

“It’s certainly not workforce housing, but it’s not high-end luxury either. It’s mid-rise rental stock needed for guys like me and you,” Kelly said.

A 600-square-foot one-bedroom unit is on the market for just under $2,500 per month, while the landlord is hocking a 1,000-square-foot two-bedroom for $3,600, as per the real estate website Apartment List.

“We saw great value in being able to recapitalize this asset after a successful construction process,” Guo said in a statement. “We look forward to completing the stabilization process and positioning the community for long-term success.”

Hard hats and safety vests have become common sites in Hub 25’s South Boston neighborhood over the last few years. A nearby T stop makes the zone a short trip from the city’s core, and developers have been snatching up unused parcels to convert to new asset types.

A few blocks from Hub 25, Center Court Partners, the owners of what used to be a local television studio are considering putting up two 20-plus-story towers on the property, 75 Morrissey Boulevard, which would bring about 760 new apartments to the neighborhood. And last January, Nordblom Development picked up another former office and industrial building in the neighborhood—the previous headquarters of the Boston Globe—with plans to flip the space into offices for tech firms.

Like other major cities with thriving local economies, Boston’s housing market is feeling the crunch. Home prices in the city are up more than 61 percent over the last 10 years, according to research by Urban Institute—and in some desirable suburbs, they’ve increased almost 90 percent over the decade. The research found that Boston is the fifth-least-affordable metro area in America for residential real estate, following Los Angeles, San Diego, New York and Houston.