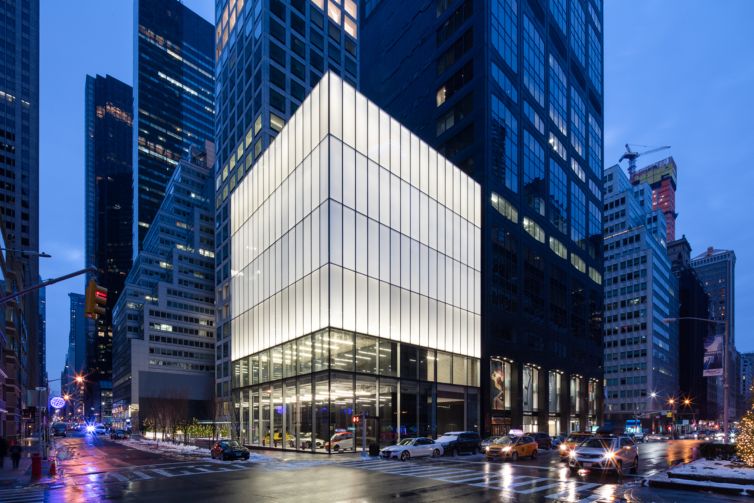 The space also includes the entire underground concourse that spans more than 30,000 square feet and connects the cube to the tower—which it will use for auction and gallery space—and 19,000-plus square feet for its executive offices at 432 Park, which uses the address of 40 East 57th Street, as per a Phillips release.

The move from 450 Park Avenue will increase the size of Phillips’ sales room by 20 to 30 percent and will make for better viewing of art since it doesn’t have columns like the old space, Phillips CEO Edward Dolman told Commercial Observer.

“The old space was adapted retail and office space and wasn’t designed for exhibition galleries,” Dolman said. “This space was effectively designed by [Macklowe chairman] Harry Macklowe and his team to get high-quality exhibition and he always had Phillips in mind.”

Aside from the exhibition room, Phillips’ digs at 432 Park Avenue will have a café, auditorium and private sales gallery. Phillips plans to move into the new space next year and host its first large sale there in November, Dolman said.

There were no brokers in the deal, according to a Phillips spokesman. Dolman declined to provide the terms of the deal, but CoStar Group data lists average rents in the building at $58 to $71 per square foot.

The 96-story luxury condominium 432 Park Avenue, developed by Macklowe and CIM Group, is the tallest residential tower in the Western Hemisphere. Macklowe later sold part of its interest to CIM Group, but bought the commercial condo—a mixture of space and the cube—for $411.1 million in 2016, as CO previously reported.

“This move by Phillips auction house has fulfilled my vision to house the company in an appropriate home to allow it to more effectively serve the public and continue to create a strong voice in the market,” Harry Macklowe said in a statement.

Last week, a judge ruled in a divorce trial that Macklowe had to pay his ex-wife Linda Macklowe $82 million for her stake in his real estate portfolio, including $7.9 million for the commercial and retail portion of 432 Park Avenue, The Real Deal reported.