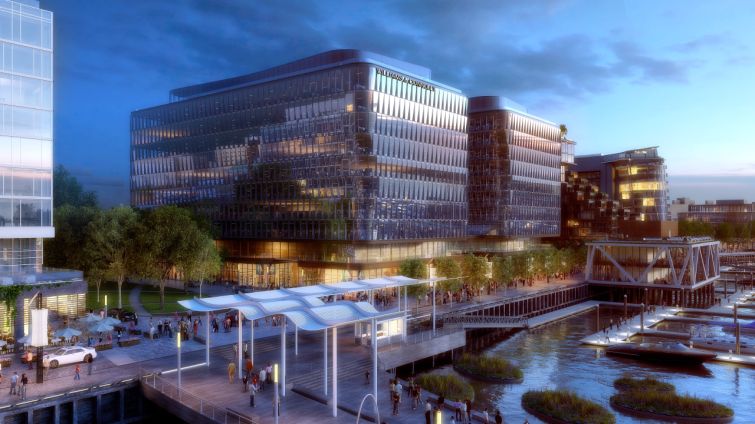 Rendering of one building as part of The Wharf Phase 2. Image: PN Hoffman

Williams & Connolly has signed a lease to occupy nearly 300,000 square feet across two buildings that are under construction in the second phase of The Wharf development in Southwest D.C., according to a press release from developers PN Hoffman and Madison Marquette. The prominent law firm, which signed a 15-year lease, is the first office tenant to take space at the office towers.

The deal closed on Dec. 14, according to a spokeswoman for the developers, who would not disclose the asking rent. The firm will move to the conjoined 12-story towers located at 690 Main Avenue SW in 2022, per the release, which notes that the firm’s offices will boast waterfront views and modern designs. Employees will also have access to a penthouse level that can be used for events.

Joseph Petrosinelli, a chairman at Williams & Connolly, said in a prepared statement that the firm is “excited to be at the forefront of the further development of the city taking place along the waterfront.” Williams & Connolly, which currently has more than 600 employees, will be relocating from its 725 12th Street NW location in Downtown DC where it’s been headquartered since 1992.

Calling Williams & Connolly one of the nation’s “most storied law firms,” Amer Hammour, the chairman of Madison Marquette, said in the release that he’s “thrilled” to welcome the company to The Wharf.

“Having one of the nation’s top firms choose to bring their team and talent to Southwest D.C. from a traditional K Street-style offering is a true testament not only to what our team has built on D.C.’s waterfront, but what we are continuing to create with Phase 2,” Monty Hoffman, the CEO of PN Hoffman, said in the release.

Brian Dawson and Amy Bowser of JLL represented the landlords and did not return CO’s request for comment.