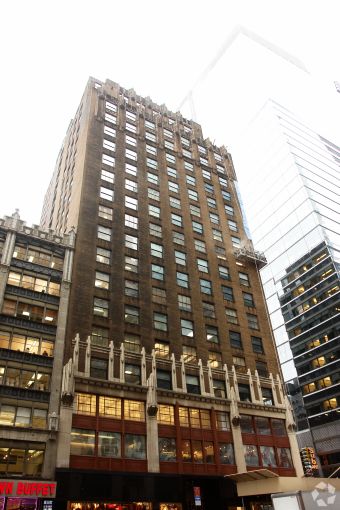 I Love NY Gifts has signed a lease for close to 9,000 square feet at a Times Square building for a new flagship location, according to a press release from the landlord and information on its broker’s website.

Jordyn Comras, TJ Cholnoky, Jackie Totolo and Ariel Schuster of RKF, a Newmark Group company, represented the landlord and the tenant in the transaction.

Totolo touted: ”The new facade and glass storefronts, 125 feet of wraparound frontage and the amazingly high ceilings of the retail space.”

Schuster declined to provide further information and directed a reporter to the press release.

The space has been vacant since American Realty Capital New York City REIT—a public non-traded real estate investment trust referred to as NYCR—acquired the building in November 2014 for $170.3 million. At the time of the purchase, the roughly 170,000-square-foot building was 76 percent leased, per a 2014 press release.

Zachary Pomerantz, a senior vice president at NYCR, said in the release: “We are excited to add I Love NY Gifts as our primary retail tenant at NYCR’s 9 Times Square property and to now have achieved almost 85 percent occupancy in the building.”