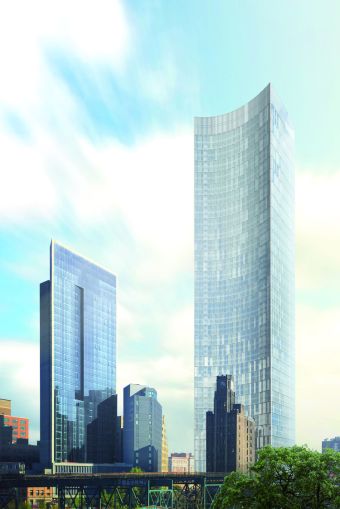 The Durst Organization has secured $360 million from M&T Bank to finance construction of its massive Queens Plaza Park project in Long Island City, Queens, according to property records.

That year, Durst paid Property Markets Group and Hakim Organization about $175 million for the site, as per The Real Deal.

“We’re excited to close on yet another transaction with The Durst Organization,” Joe Pizzutelli, a group manager at M&T, told Commercial Observer. The tower “will change the Long Island City skyline and create a new standard for luxury apartment living in New York.””

The 958-unit planned building, at 29-37 41st Avenue, stands to compete with an under-development condominium project from another developer, Chris Xu, for the title of Queens’ tallest residential tower. Xu landed a $502 construction financing package for his project, also rising in Long Island City, from JP Morgan Chase in July, The Wall Street Journal reported.

The design for Durst’s tower will preserve another structure on the site, a building that dates from 1927, known as the Clock Tower, which originally housed the Bank of Manhattan. In renderings, Queens Park Plaza’s curving facade, designed by Handel Architects, is shown to frame the Clock Tower building where it stands adjacent to the intersection of Queens Boulevard and Northern Boulevard. Durst will also renovate the Clock Tower itself for retail use in a scheme designed by architect Morrell Smith.

Nearly 300 of the residential high-rise building’s apartments will be reserved at affordable rents, according to Durst, and it will also include a pool, a gym and a playroom for kids.

Although many institutional lenders have retreated from making construction loans, and even top-of-its-class Bank of the Ozarks has faltered this year, M&T has flashed a commitment to development financing in recent months. In November, it joined in a $228 million loan for construction on Admiral’s Row at the Brooklyn Navy Yard, and lent $54 million to RXR Realty the month before to back that developer’s Village Square project in Glen Cove, N.Y. on Long Island.

Representatives for Durst did not respond to inquiries.