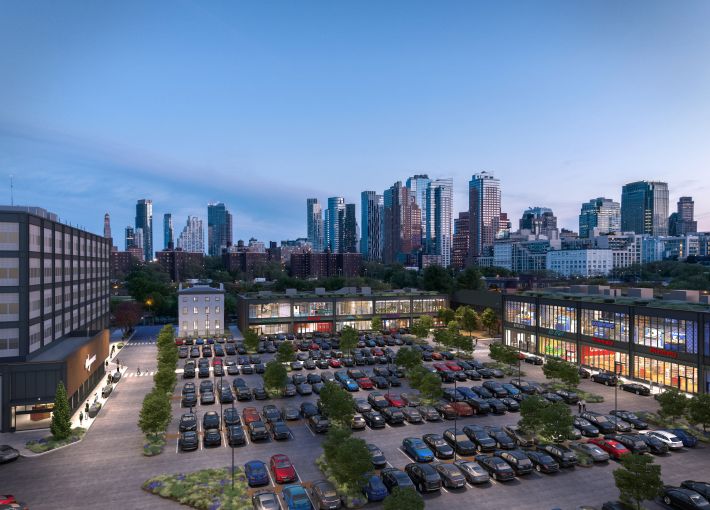 Located at the intersection of Flushing Avenue and Navy Street, the mixed-used development will be anchored by a 75,000-square-foot Wegmans supermarket—the first in New York City—and include 85,000 square feet of additional retail space, 435 parking spaces in addition to 266 surface parking spaces, 356,000 square feet of light industrial and creative office space master leased to the Brooklyn Navy Yard Development Corporation and a 5,000-square-foot community facility.

Construction is expected to wrap in early 2021.

“While we didn’t wait for financing to start construction and have already topped out much of the project, we’re pleased to have again worked with JLL to complete another major loan with M&T and BNY Mellon,” Steiner, the chairman of Steiner NYC, said. “When Wegmans opens in 2019, it’ll be a game changer – for the Navy Yard, for Brooklyn, and for the whole city.”

Admiral’s Row was once a row of ten homes—built between 1864 and 1901—that were used by naval officers at the Brooklyn Navy Yard, and owned by the National Guard of the United States. The buildings were demolished in 2016 as part of Steiner’s redevelopment, with the exception of one building that is being preserved (known as Quarter B, and constructed in 1872) and a historic Timber Shed that is being rebuilt at the site.

When completed, the project will create 1,900 jobs at the site, including 450 initial hires at Wegmans alone.

“The continued redevelopment of the historic Brooklyn Navy Yard through the construction of Admiral’s Row will bring thousands of new jobs and services to the community. This is a stellar urban model for mixed-use development,” said Matt Petrula, M&T’s group vice president for commercial real estate lending.

“This project has a best-in-class sponsor along with long-term anchor tenants already in place,” Aaron Appel, a vice chairman at JLL, said. “Given these factors, and its location within the economic heart of Brooklyn, it was a very attractive proposition for the lending community.”

“For M&T Bank and BNY Mellon, this was an opportunity for repeat business with a prized client, and a transformational project,” Jonathan Schwartz, a managing director at JLL, added.

The development will Steiner’s second major one in the Navy Yard. His first was Steiner Studios, the 765,000-square-foot movie production facility that occupies five former warehouses at the eastern edge of the yard.

Officials at BNY Mellon could not immediately be reached for comment.