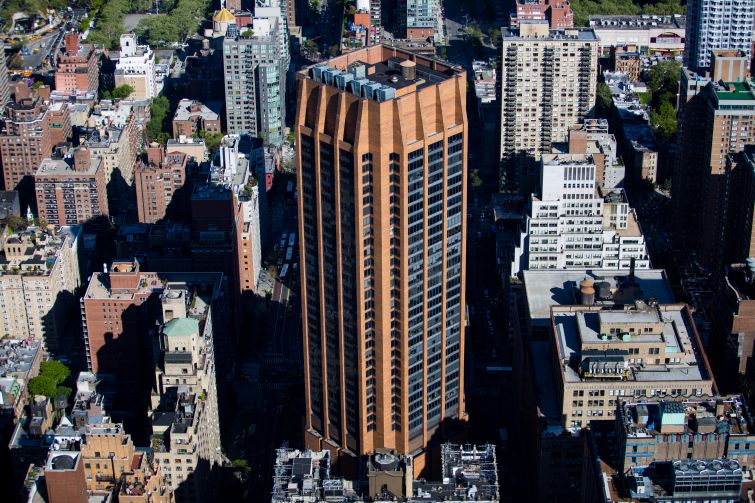 The deal, which closed the last week of November, refinances $81.8 million in previous debt that was most recently consolidated in an account with Principal Life Insurance Company. It also provides new debt in the amount of $100.1 million against the 41-story building, in which Cohen Brothers controls the office portion. The New York City Educational Construction Fund owns portions of the building’s lower floors, which are home to a trio of public schools: Unity Center for Urban Technologies, Manhattan Academy for Arts and Language and Murray Hill Academy.

The building’s brick facades and blunt geometry—aligned diagonally on the western half of the block bounded by Park and Lexington Avenues and East 33rd and East 34th Streets—recall the castle-like armory for the 71st Regiment of the New York National Guard that stood at the address before the current structure went up in 1973. Current office tenants in the nearly 950,000-square-foot tower include outdoor advertising firm JCDecaux, printer Mimeo, and TransPerfect, which provides translation services to businesses.

Starting in 2016, the landlord, led by developer Charles Cohen, embarked on a $30 million makeover of the building’s lobby for office tenants, including a refresh of the sloping plaza that accommodates the building’s slanted orientation relative to its block. Interior upgrades included new lighting, wood paneling, and improvements to the building’s street-level storefronts, which currently host a Starbucks, a Le Pain Quotidien location and P/K Lifestyles, a fabric store.

The building’s educational space was previously home to Norman Thomas High School, but the school was shuttered after the 2014 school year in light of poor student performance.

Representatives for Cohen Brothers did not immediately respond to inquiries. A spokesman for Citi declined to comment.