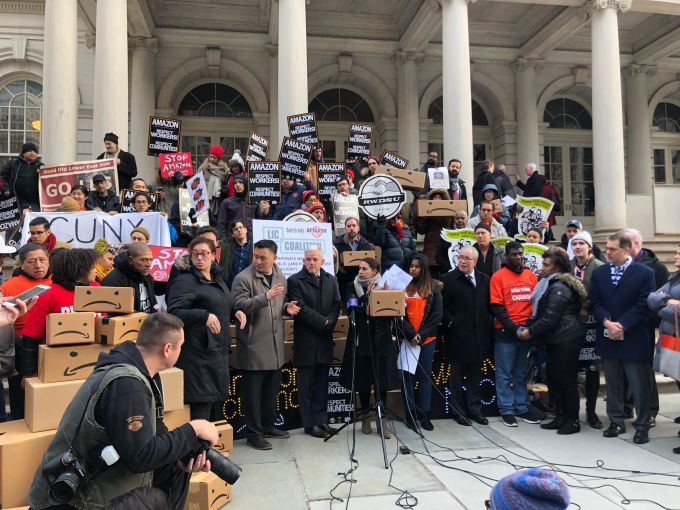 During a combative hearing at City Hall today, City Councilmembers accused the city and state development agencies of avoiding the city land use process and offering a sweetheart deal to a private landowner when they hammered out a $3 billion incentive package to bring Amazon to Long Island City, Queens.

A contentious oversight meeting on Wednesday became an opportunity for the council to grill city Economic Development Corporation President James Patchett and Amazon executives on whether they would be willing to go through the Uniform Land Use Review Process (ULURP) before Amazon builds its 8-million-square-foot HQ2 campus on the Queens waterfront.

“What’s the threshold when ULURP is overrided?” asked Council Speaker Corey Johnson. “When do we decide that we avoid ULURP? What if we were gonna create 8,000 jobs? Is 25,000 jobs the threshold?”

Patchett replied that the state land use process that’s being used to develop a campus for Amazon—known as a General Project Plan (GPP)—was also employed to redevelop Brooklyn Bridge Park and Times Square. The trillion-dollar tech giant promised last month to build up to 8 million square feet of office space and bring 25,000 jobs to Long Island City as part of its agreement with the city and state. (The Seattle-based firm announced plans for another HQ2 development in Crystal City, VA at the same time.) Officials claim Amazon will generate $27.5 billion in tax revenue for the city and state over the next quarter century. The hearing was interrupted a handful of times by protesters in the upper balcony of the council chambers, who chanted, “G-T-F-O [Get the fuck out], Amazon has got to go!” and at one point, they even unfurled a banner that declared, “No to Amazon.”

“Do you think we shouldn’t have taken advantage of the GPP in Times Square?” Patchett challenged Johnson. “These are metaphysical questions that we can’t possibly answer today,” Johnson answered, deflecting the question as the crowd in the council chambers chuckled.

“You’re not saying you would go somewhere else definitively if you had to go through ULURP?” the speaker asked the Amazon executives, noting that Patchett had claimed Amazon wouldn’t have agreed to move to New York City if it had to go through a city rezoning process.

“We want to hire New Yorkers quickly and we think the GPP is the best way to do that,” Huseman said.

The EDC chief argued that the state process allowed the city to create a separate fund that would earmark half of Amazon’s property taxes for infrastructure improvements. He claimed that if they had rezoned the waterfront parcels through ULURP, Amazon’s Payments in Lieu of Taxes (PILOTs) would have gone into the city’s general fund rather than towards fixing streets and parks in western Queens. Officials predict that the infrastructure fund will net $650 million over the next 40 years.

The council also lobbed criticism at the EDC for allowing Plaxall, a plastics company, to get a rezoning for its property in Anable Basin as part of the Amazon deal. The 70-year-old plastics manufacturer offered up a 13-acre swath of industrially zoned land for Amazon’s new headquarters. The state will acquire the majority of Plaxall’s site for Amazon (which did a yet-to-to-be-disclosed deal with Plaxall to purchase the land after construction is done). In exchange, Plaxall gets to hold onto a six-lot assemblage at the southern edge of the property, between 46th Avenue and 46th Road. The state will help rezone the southernmost parcel to accommodate a mixed-use project as large as 800,000-square-feet. Officials’ decision to include the site means that Plaxall will avoid negotiating with the council—particularly Long Island City Councilman Jimmy Van Bramer—or the local community board in order to score a residential rezoning.

“Not only is Plaxall getting Amazon as a tenant, they’re also getting a huge windfall in the form of a huge upzoning without having to lift a finger or work with the council,” argued Johnson. Plaxall had originally planned to go through ULURP to build up to 5,000 apartments on its Anable Basin property.

Van Bramer, meanwhile, criticized the city for “only securing $5 million from a trillion-dollar corporation,” referring to Amazon’s commitment to pay for workforce development programs in the neighborhood. He pressed Patchett and Huseman on whether the $500 million state capital grant promised to Amazon could be spent on public housing developments in western Queens instead. Patchett estimated that Astoria Houses, Queensbridge Houses and Ravenswood Houses together needed at least a billion dollars in repairs.

“Well we certainly support the state putting aside part of its grant for public housing,” Patchett replied.

“Transparency is a hallmark of good governance,” Van Bramer said. “So we should all be concerned they were eager to promise Amazon that they would bypass local land use review and agree to sign non-disclosure agreements while doing so. The memorandum of understanding is shocking and shameful in how little it extracted from them for the community.”