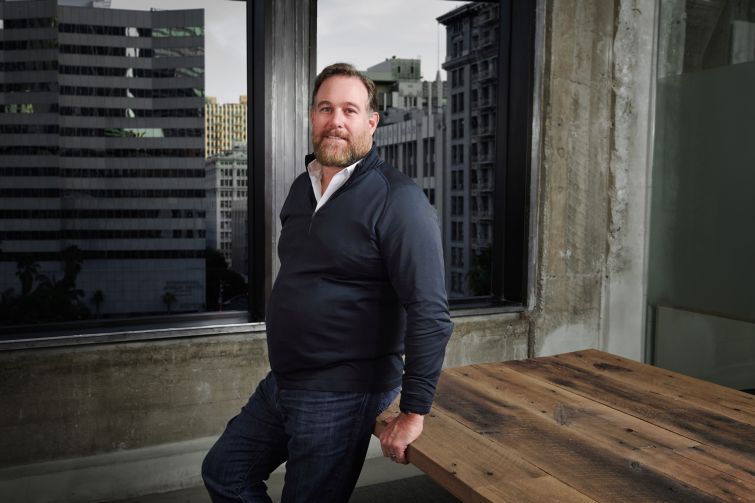 Chris Rising, 49, has witnessed the evolution of the office market firsthand.

As a former lawyer and assistant to brokerage legend John C. Cushman, before co-founding Rising Realty Partners with his father Nelson Rising, a noted developer of the U.S. Bank Tower in downtown Los Angeles, among other properties, he has watched as technology radically impacted office space and design. Since 2011, Rising Realty has played a major role in shaping development in downtown Los Angeles.

The firm is well known for buying the historic PacMutual center for $60 million in 2012, renovating the Beaux-Arts-style building at 6th Street and Olive Street from what The Los Angeles Times described as a “lower-rent alternative for conventional white-collar firms into a preferred address for business in creative fields.” Rising turned more than a tidy profit on the asset, selling it for a reported $200 million to Ivanhoe Cambridge, and Callahan Capital Properties in 2015. Last year, Rising Realty joined with Colony NorthStar to purchase One California Plaza for $460 million.

Rising spoke to Commercial Observer about tenant demands, what inspired him to start the firm’s first fund and what he really thinks about Elon Musk’s tunnel projects as a solution to L.A.’s traffic woes.

Commercial Observer: How does the modern office look? We hear so much about “creative office”—

It’s just stupid. What does that mean? What people are saying is that every company is a tech company in one way, shape or form. People are using hardware and software and because of that the way that you have an office space work from the 1980s and before doesn’t make sense. You don’t need a space for a typewriter. I remember when I was working for John Cushman, he had four assistants. You don’t need that anymore because a lot of those tasks are taken by AI.

But what do you need? You need to figure out how do I get my team together so we can have these collaborative discussions to create content or create documents…some item that we can’t do remotely. To think that your office space that you had in 1995 should look the same in 2018 just makes no sense.

So, what are tenants looking for?

One of the keys is you’ve got to have broadband and fiber because people recognize that you can’t run your business on the DSL line.

Buildings that haven’t done the investment in that infrastructure cannot compete. Secondly, you have to make people’s lives easier. So that’s concierge service that we try to create in every building or try to make parking easier, making transportation easier. The days of “here’s a floor, 13 feet between two metal floors and you go do it,” they’re just over and I don’t see them coming back.

Most of my career we were most concerned with getting FIRE tenants, finance, insurance, real estate and engineering firms. Credit tenants that all really wanted the same kind of buildout. Put offices around the outside, put interior cubicles and give me a conference room here or there.

Today, we’re all talking about TAMI tenants, technology, advertising, media and intelligence. Companies that their ply and trade has something to do with intelligence and then you probably put some healthcare in there today, but that’s a different format that you build something out for.

Yeah, it’s kind of like a clubhouse. But I think you’re going see more huddle and meeting rooms come into the mix then we’ve seen in the last few years. Even if you are only working off your iPhone, you do need focus.

The traffic thing too, I can tell you where I’m at. I literally look at Google Maps and if it’s anything over 35 minutes to come downtown, I’m just working from a coffee shop in Pasadena unless I have a face to face meeting. Our company prides itself on having certain days that are for face-to-face [meetings]. Tuesday and Wednesday, people are expected to be in the office.

When you talk about the traffic. What do you think about Elon Musk’s tunnel that’s set to open on Dec. 18?

I think what’s important for Elon Musk is he may have built a better mousetrap when it comes to a boring machine, but I don’t think the state or the county is going to hand Caltrans over to him. They may buy his product, because that’s really what it is.

What markets do you focus on aside from downtown Los Angeles?

Strategically we’re focused on the Western U.S. and so we really start with the five markets in California. San Francisco in the Bay area, Silicon Valley, L.A., Orange County and San Diego. And when we look at those markets, we see some characteristics that we really appreciate.

People can say all they want about California being a high tax state, but we are the fifth largest economy in the world. People come here and they don’t want to leave if they don’t have to. It’s a strong millennial demographic. You go back to the ‘90s Southern California and the industry was basically defense and Mickey Mouse [tourism], was what our economy was. We are now an unbelievably diverse economy. Today it is a wide variety and Silicon Beach in a lot of ways is surpassing what is happening in Silicon Valley because the content is here. Hosting the Olympics in 2028 is driving our infrastructure. That’s one of the things we also look at in these markets, the public-private partnerships and the amount of money that is being put in. We also look at the things that we care about. People care about conservation and climate change so these are really good markets for us to be in.

The analysis proves that people have done better on Western U.S. investments than Eastern. We have metrics on that. We also think that as we go forward, more and more millennials are going to want to be in markets that are similar to the five I just described. We really are focused on Salt Lake City. One of the things that most people don’t realize is that Salt Lake City is the second largest employer for Goldman Sachs, they have the second most employees there.

Portland, Seattle. Seattle is a very mature market now. My favorite market of all of them is Denver. Denver has gone from being a one trick pony with petroleum to now being extraordinarily diverse and on every list of any company that wants to be located in the middle of the United States. We are very close to buying something in Denver as we speak. But they all share these California market characteristics that I described.

What kind of properties are you looking to acquire?

Office, mixed-use; so we like to find historic buildings. We like to find mid-century buildings that can be upgraded. There is a whole style of architecture in the ‘70s that can be repositioned. Not everything has to be from the ‘30s. We have a whole scorecard that we do before we buy something. But if we can really make a change and create value and create a really great place and reduce carbon, that’s a project we want to buy.

We also do some entitlement and development, but our real focus is that. We’re just in the market with our first fund, it’s called the Rising Impact Fund.

We partnered with a group called i(x) investments and i(x) is founded by Howard W. Buffett, Warren’s grandson and Trevor Neilson. Howard has just released a book called “Social Value Investing,” which talks about how do you have a lower case i impact and a greater rate of return. We’re going to market with that in January. (Rising declined to provide further details on the fund at this time.)

The reason we want to raise money now is that we are seeing some fissures. We’re seeing pricing beyond what makes a lot of sense. Doesn’t mean we haven’t found a deal here or two. I’m not saying the whole market is imploding by any means, but I’m seeing some softness out there.

Now, as I say that, 2018 looks like it’s going to exceed total sales volume from 2017. But trees don’t grow to the sky and we’ve had the longest run and people are looking at ways not to invest as opposed to ways to invest a little bit. So, this is a good time to raise money, so that’s part of what we’re looking at doing.

There is talk that there will be a downturn. Do you have a feeling of when that will happen?

Here’s what I think of that question. The first thing is we all have to not think that every recession is the Great Recession. I can’t predict what’s going to come out of Washington and I can’t predict globally, but I don’t see anything structural the way we did [in 2008] when it was kind of obvious, when the busboy was buying a million-dollar house. Just by human nature, you’re going to start to see people being cautious because it’s almost been 10 years [of economic recovery]. I see more of a 12 to 24-month slowdown.

The one thing about the office market is leases always turn. Leases don’t know when there is a recession, so you always have the opportunity to win a deal. That bodes well. I can give you a whole doomsday scenario, but I just don’t think it’s going to play out that way.

You have said coworking is susceptible to a downturn in terms of taking up too much space.

When WeWork is the largest tenant in Manhattan that makes you a little concerned. The great thing that WeWork and Cross Campus and these others have done is shown that the 10- or 15-year lease commitment doesn’t work for the economy of 2018. We need to build in more flexibility. What WeWork and what some others have done is they come in and fill that void for a company who can’t make a commitment beyond three years. I think landlords are going to start and take that back and work with lenders on more flexibility.

You are creating this fund. I read that you didn’t want to find financing for every deal.

Well, it’s a classic problem. Do you want to be a GP and not have any of your deals cross and every deal find new investors or do you want to have discretion over your own capital? I think with our strategy on value-add as an impact with an alpha, we’d like to have more discretion about when to sell, when to buy so that’s a driving force for us.