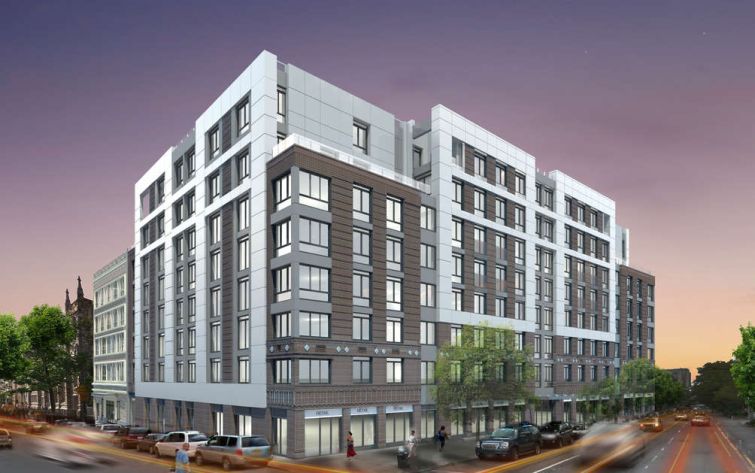 Goldman Sachs Investment Group and BRP Companies have pinned down $71 million in financing from Square Mile Capital Management for The Rennie, a newly-built condominium building in Harlem, according to city records and sources close to the transaction.

The loan pays down prior debt from Santander, returns equity to the sponsor and allows time for condominium sales at the eight-story property, located at 2341-2359 Adam Clayton Powell Jr Boulevard.

The 200,000-square foot building includes 134 units and five stories of community space, according to GF55 Partners, the architect behind the project.

The building takes its name from the Renaissance Ballroom, a theater and event space that stood on the site of the new building from 1924 until it was torn down in 2015. Developed by African-American impresarios in the 1920s, the theater was a fixture of the Harlem Renaissance. Later, jazz legends such as Duke Ellington, Count Basie and Ella Fitzgerald all performed on its stage, and champion boxer Joe Louis fought in matches there during a career that spanned the 1940s.

BRP bought the site in 2015 for $10 million, property records show. The developer, led by co-founders Meredith Marshall and Geoff Flournoy, has more than $1 billion invested in forthcoming multifamily projects in New York City and Baltimore, Marshall told Commercial Observer over the summer. In the Big Apple, the developer has a building in the works at 794-814 Flatbush Avenue in Brooklyn, as well as other properties either under construction or blueprinted in Queens’ East New York and Jamaica sections.

“When you can go into these up-and-coming neighborhoods where there has traditionally been less investment and you create a product for [everyday] folks, the product is well received,” Flournoy told CO in a July interview. “You feel proud about what you are doing. We are not just selling $5 million condos. We are creating a need for the backbone of the city.”

Spurred by continuously strong residential demand, multifamily developers have increasingly turned their attention to the upper half of Manhattan to replace older buildings with denser new construction. L+M Development Partners and Tahl Propp Equities are at work on a 400-unit affordable project at 1465 Park Avenue, according to GlobeSt.com, and in another partnership, L+M has teamed up with Jonathan Rose Companies to build a 384-unit rental building at 1681 Madison Avenue, Curbed reported. Meanwhile, the recent rezoning of the Inwood neighborhood at Manhattan’s northern tip is set to bring a wave of new projects to that area, too.

This story was updated to correct the financing amount previously stated.