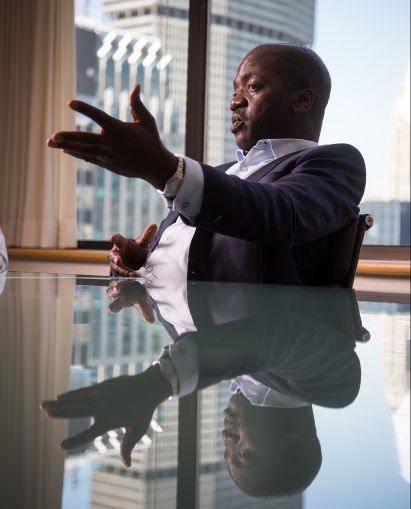 One of Meredith Marshall’s earliest memories was just after his family moved to the East Flatbush section of Brooklyn in 1969.

“We were the first African-Americans on the block,” the co-founder of developer BRP Companies told Commercial Observer. “I can tell you, the first night, people ripped off the siding of the house.”

It was not the most auspicious way to begin what would otherwise be a pleasant life there.

“We had a synagogue down the block, a Catholic church down the block—you had a lot of different kinds of people,” Marshall, 51, said from his offices on the 33rd floor of 767 Third Avenue between East 47th and East 48th Streets. “In my mind, there were so many people of different social and economic backgrounds—we had college professors on the block and guys in and out of prison. My frame is different [than other people’s] because it’s more inclusive.”

That might have something to do with why Marshall’s projects today are in the less gentrified, more diverse parts of the city and targeted to low- and moderate-income families. “To build a better society, you actually need all of those groups working together,” he said.

And although middle- and low-income housing projects doesn’t sound the most lucrative, the 70-employee BRP is on a tear with about $1.12 billion worth of projects under development in New York City and Baltimore and already owns about 1.1 million square feet; another $900 million more are in planning stages. And BRP is hungry for more.

In Brooklyn, BRP is in predevelopment stages for its Caton Flats mixed-use project that will replace the local flea-style Flatbush Caton Market at 794-814 Flatbush Avenue near Prospect Park. The developer won a Request for Proposals from the New York City Economic Development Corporation in October 2015 for the site and hopes to erect a 277,000-square-foot, 14-story project with 251 moderate- to low-income apartments. Construction is expected to commence late this year.

In addition to residences, the new building will house the flea market in 13,000 square feet on the ground floor. The flea market features mostly Caribbean vendors that have been in the area for decades. (It’ll also have 75 parking spaces and a community center.)

Plus, there will be an incubator space for the vendors to get training in the areas of financing and marketing, as well as a test kitchen for whipping up prepared foods and a workshop space for art and textiles. (BRP signed a two-and-a-half-year lease at 2184 Clarendon Road for the market to occupy during the construction of its permanent home.) The Caribbean American Chamber of Commerce and Industry will relocate to the property from the Brooklyn Navy Yard to be closer to the local Caribbean community.

“[Meredith] grew up in Flatbush so it’s near and dear to him,” said James Johnson-Piett, the chief executive officer of business consulting firm Urbane Development, which will manage the market. “Being able to preserve this culture’s legacy is something that is very unique to this project.”

Meanwhile, in the East New York section of Brooklyn, BRP renovated 468 rent-stabilized apartment units in a 68-building complex. (Because of a $32 million tax credit, the rent is around $1,042 for a two-bedroom apartment, as the New York Daily News reported in 2014.)

And in a second phase of the Livonia Commons project in East New York, BRP is constructing 242 new affordable homes for low-income families, thanks to $43.1 million in tax credits from the New York City Department of Housing Preservation and Development. The buildings are located at 481 and 500 Livonia Avenue, as well as at 463 Hinsdale Street.

Jumping to Jamaica, Queens, BRP broke ground this April on a 669-unit affordable housing project at 93-01 Sutphin Boulevard called The Crossings at Jamaica Station. The $407 million, 773,000-square-foot project is the largest private development in the area and is expected to be completed in 2019.  It comprises a 30-story high-rise and a 15-story midrise, both designed by FXFowle Architects.

BRP acquired the land from the Greater Jamaica Development Corporation in 2015 for nearly $20 million with the promise to construct a large mixed-use project to help spur development in the area and enhance the community for current residents.

“The Crossing at Jamaica Station will be a true-mixed income project that strengthens the whole neighborhood,” Alicia Glen, the city’s deputy mayor for housing and economic development, said at the groundbreaking a few months ago. “For nearly 700 families, this will mean real security and the ability to have a little left over every month to get ahead. And this is just one of many dynamic changes afoot in Jamaica that will anchor its families, support local businesses and build community for generations to come.”

In the Bronx, BRP is partnering with The Kretchmer Companies and The Hudson Companies on a nearly 1,000-unit, two-phase project with moderate- to low-income apartments called La Central. The 1.2-million-square-foot development in Melrose will feature a 50,000-square-foot YMCA, a home for the BronxNet Television, a skate park and a rooftop telescope for the Bronx High School of Science. The developers won the project via the city’s Request for Proposals in 2013. Back then, The Hudson Companies was familiar with BRP’s mixed-income housing work and wanted to partner with it.

“We liked their work a lot,” said Aaron Koffman, a principal of The Hudson Companies. “We had an eye on them, and we knew their work, and it seemed like a good fit. I heard their projects were successful.”

The partnership hopes to break ground by the end of the year.

Of course, BRP has projects in Manhattan. In Harlem, there is the 115-unit condominium, the Aurum, at 2225 Adam Clayton Powell Boulevard that opened last year and is now sold out. Twenty percent of its units were affordable (from $400,000 to $500,000), and market-rate condo units ranging from $500,000 to nearly $1.2 million; BRP is leasing up the 33,000 square feet of community facility and retail space. Another 135-unit Harlem condo, The Renny, at 2341-2349 Adam Clayton Powell Boulevard, is nearing completion, and BRP is also building a 39-unit affordable rental at 841 St. Nicholas Avenue.

“It’s doing good and doing well at the same time,” said Geoff Flournoy, a co-founder and managing partner of BRP. “When you can go into these up-and-coming neighborhoods where there has traditionally been less investment and you create a product for [everyday] folks, the product is well received. And you feel proud about what you are doing. We are not just selling $5 million condos. We are creating a need for the backbone of the city.”

Personally, Marshall doesn’t much care for the word “gentrification”—even though neighborhoods he grew up in have succumbed to it. While he grew up in East Flatbush, Marshall was born in Crown Heights, Brooklyn, and spent a lot of time in Bedford-Stuyvesant.

As a kid, he loved baseball and played outfield for a local youth team, the Brooklyn Bonnies. He went to Brooklyn Technical High School in Fort Greene, where he played center field. (He passed this love of baseball on—his three children, two boys and a girl—play on youth teams.)

Flournoy and Marshall met in 1985 after they both joined the largely African -American fraternity Kappa Alpha Psi while attending schools in the Boston area. At the time, Flournoy was enrolled at Northeastern University, and Marshall was a student at Boston University.

Marshall, who studied electrical engineering, and Flournoy, whose father owned real estate, both realized the business potential of the industry. So they pooled their resources and purchased a three-story townhouse in Boston in 1987.

Within a week, the stock market was hit with one of its worst weeks in its history—Black Monday, Oct. 19, 1987. The Dow Jones Industrial Average lost more than 22.6 percent of its value in a single day. Real estate values plummeted as a result of the pullback.

“It was not a success. It was a learning experience,” Flournoy said. “Sometimes you have to pay to learn. It’s the hard knocks of learning real estate.”

So they chopped it up into three condo units and began renting it out to fellow fraternity members. (Ten years later they arrived at a reasonably happy ending when they sold it and broke even.)

The duo temporarily parted ways for business school: Marshall went to Columbia University, and Flournoy attended the University of Chicago.

But following graduation, both found banking jobs in New York City—Marshall at Wasserstein Perella & Co. and Flournoy at Salomon Brothers—and became roommates in 1992 in Fort Greene, Marshall’s old high school stomping ground. By day, they worked their banking jobs, but by night and on weekends, they worked on real estate.

Back then it wasn’t about affordable housing. In fact, it was quite the opposite. They bought brownstones, renovated them and sold the units as condos at market rates. The namesake niche (BRP stands for Brownstone Realty Partners) took off and through the 1990s the business grew until it was too big to be run out of Marshall’s home.

“I was literally writing checks out of my second bedroom in my house, and contractors and plumbers were coming in,” Marshall said.

So in the early 2000s they opened up a storefront and quit their day jobs. Around that time, they had about $50 million in development, Marshall said.

By 2007 when the market began to collapse, BRP decided to switch gears. The following year, while the market imploded, they formed a joint venture with Goldman Sachs Urban Investment Group and started working on affordable housing projects.

Even as the market returned a couple of years later, Marshall wanted BRP to stick to affordable housing since he believed in building communities with a mix of people and incomes.

“I think there are two qualities that really distinguish Meredith,” said Dan Kaplan, a senior partner of FXFowle, which worked with BRP on La Central and The Crossings at Jamaica Station. “He is great at communicating and motivating, and he is a real visionary. I think he really has a deep passion for creating communities and meeting the needs of the residents of the city of the 99 percent, not the 1 percent. And he really is dedicated to inclusive city building.”

Marshall is also a philosopher who captilizes on any opportunity to impart knowledge of real estate issues at a moment’s notice. This included telling this reporter why “gentrification” is a loaded word.

He also opined on why there aren’t more black developers in the city and, for that matter, the country.

“In our communities, you don’t have developers because we are 100 years behind,” he said. “We are trying to catch up. There are more [African-American] developers now than when we got into the business 20 years ago.

“Here is my bias,” he continued. “I think engineers should actually rule the world. Again, I am trained as an engineer, so we look at things, and we critique and come up with a better system. We have to come up with better systems [for society].”

An engineer like Marshall is certainly making his influence felt on the rest of the business beyond just Gotham. Last year, BRP took a minority stake in a multiphase ground-up project in Baltimore, which La Cité Development is constructing. The first phase comprises 262 units (market rate and affordable housing) and 227,000 square feet. The project is estimated to be worth $71 million. The developers expect the remaining phases to comprise nearly 2,000 units over 3.2 million square feet of housing.

And in Newark, N.J. BRP is planning to acquire and renovate an existing and occupied 200-unit affordable, 160,000-square-foot building. It expects to take title of the property later this year.

“We have to grow, and if growth is in Baltimore, if growth is in Hudson County, N.J., if growth is going to be in Southern Westchester, then we should develop in those areas,” Marshall said. “The key is to keep growing and to do what we do best—mixed-use, innovative, transformative developments.”