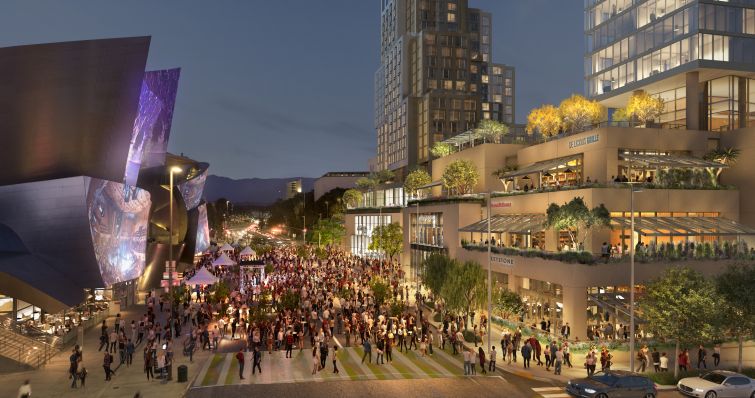 A rendering of The Grand. Credit: Related Companies

Related Companies has landed $630 million in construction financing from Deutsche Bank for The Grand, its $1 billion mixed-use development in Downtown Los Angeles, the developer announced this morning.

The Los Angeles Times first reported news of the transaction.

The Grand is a Frank Gehry-designed master planned project, aimed at “revitalizing Downtown L.A.’s cultural and civic core,” according to the announcement. It is being developed by Related and also CORE USA—a joint venture between China Harbour Engineering Company and CCCG Overseas Real Estate, who Related announced would be investing $290 million in the project back in December 2016.

Located at 100 South Grand Avenue, the development will comprise a mix of retail, hotel, dining, entertainment and residential space. It sits across from the Walt Disney Concert Hall, also designed by Gehry.

Site preparation work begins this month and construction is expected to wrap in 2021.

“Today is an exciting day not just for Related and our partners, including CORE, Deutsche Bank and the Grand Avenue Authority, but for all of Downtown Los Angeles and the region,” Rick Vogel, a senior vice president of Related Urban (the mixed-use division of Related) said in an announcement. “With the close of financing, the momentum on The Grand continues, and Related, the County, City and CRA/LA’s longstanding vision for Grand Avenue will soon become a reality.”

When completed, the project will include a 309-room Equinox Hotel, a 430-seat movie theater and 215,000 square feet of retail space. Its 39-story residential tower will include 436 apartments, 20 percent of which will be affordable.

Last month, The Real Deal reported that The City Council had also approved $200 million in bond financing for the multifamily component.

“I am pleased that The Grand has closed financing and we are moving to the next stage of this development,” Hilda Solis, Los Angeles’ County Supervisor, said in the release. “This project will create permanent jobs and build much-needed affordable housing in my district. With Frank Gehry’s visionary design supporting a variety of community-supporting mixed-use development, I am excited for the future of Grand Avenue and the larger neighborhood.”

“We are excited that this important milestone has been achieved,” Ken Himmel, the CEO of Related Urban, added. “We look forward to celebrating with all of Los Angeles, as we commence construction on this dynamic, transformational project that promises to remake and enliven the Grand Avenue artistic and cultural center of Downtown.”

Officials at Deutsche Bank were not immediately available for comment.