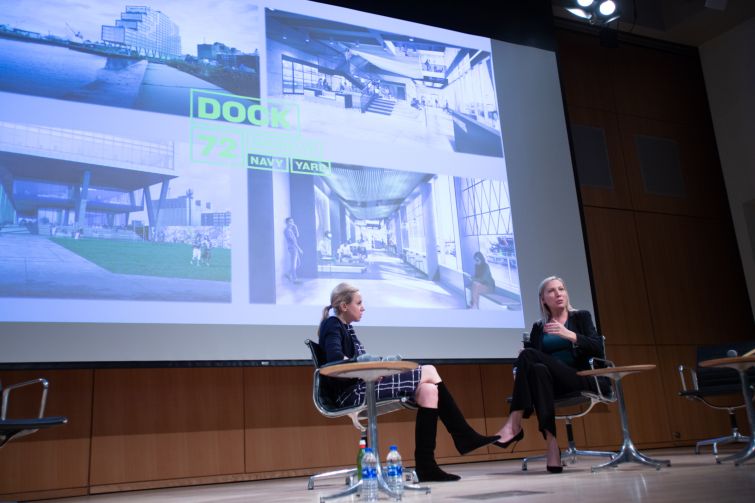 For the second consecutive year, Commercial Observer celebrated some of the most accomplished women working in the fields of commercial real estate and construction at the publication’s “Women in Real Estate, Design and Construction Forum,” held at the CUNY Graduate Center on November 15.

The morning featured three panel discussions on the increasingly prevalent role that women have played in the traditionally male-dominated realms of commercial real estate, construction and engineering, as well as the challenges and obstacles that women working in these fields continue to face.

The event also featured a keynote discussion between Kelley Lovshin of Boston Properties and Samantha Rudin Earls of Rudin Management Company, who spoke about their own experiences as women in the world of commercial real estate and their firms’ jointly developed Dock 72 office project in the Brooklyn Navy Yard.

And CO also recognized nine women who have made their mark on their respective industries, awarding Luise Barrack of law firm Rosenberg & Estis, Zoe Davidson of MTA Capital Construction and Marla Gayle of Skidmore Owings & Merrill with the “Barrier-Breaker Award”; Kate Bicknell of Oxford Properties Group, Alexis McGuffin of Lendlease and Nancy Ruddy of CetraRuddy with the “Innovative Award”; and Adrienne Hepler of Levien & Co., Hanna Jamar of Lincoln Avenue Capital and Aine O’Dwyer of Enovate Engineering with the “Woman on the Rise Award”.

The first panel of the day, “Challenges and Opportunities for Women,” was moderated by Anita Woolley Nelson of AECOM, who was joined by fellow construction and engineering professionals Beth Barton of JB&B, Stacey Dackson of Structure Tone, Tanya de Hoog of Thornton Tomasetti, Anita Konfederak of Merritt Engineering Consultants and Amy Schreiber of Cauldwell Wingate Company.

“The culture of the industry when I started in the early ‘90s was three words: not so good,” Dackson said, recalling how she would find herself condescended to (like being told she was doing “good for a girl”) and subjected to sexual harassment as a woman in the construction industry.

But Dackson added that the industry “absolutely has changed for the better” since the days when she got her start—a claim echoed by de Hoog, a founding director of Thornton Tomasetti’s London office who recalled how she was the “only woman to graduate in my [engineering] class of 200 people” and later found herself “the only woman in my office.”

In launching Thornton Tomasetti’s London practice, de Hoog said she sought to facilitate a gender-equal workplace environment that was split roughly 50/50 between men and women. “It’s about creating a culture and looking at the strengths of an individual regardless of gender,” de Hoog said.

The discussion revolved around topics including the challenges of managing an appropriate work-life balance, and negotiating the considerable demands of the construction and engineering profession with the need for a healthy and fulfilling personal life. “Because it is such a punishing [professional] environment, you need to be able to respond at a moment’s notice,” Richardson, the GCA’s executive director, said of the heavy civil construction trades in particular.

“I always felt like even if an opportunity wasn’t presented to me, I could create an opportunity for myself,” added Neuscheler, a vice president and construction executive for Turner. “I work a lot, but that’s a choice.”

The final panel of the day was moderated by Diane McNulty, a partner at accounting firm Withum, and included the Rockefeller Group’s Sarah Ashcroft, Mariana Circiumaru of GreenOak Real Estate, Rebecca D’Eloia of RXR Realty, Alexis Lenza of Hines and Jennifer McLean of Kushner Companies.

Circiumaru recalled how her father, who worked in construction and engineering himself, advised her that the industry “is not for girls” and expressed her belief that the industry “is still behind when it comes to gender equality.” She noted meetings where—despite helming negotiations of construction contracts worth millions of dollars for her firm—she’ll find that counterparts opt to address her male subordinates in the room instead of her, GreenOak’s head of U.S. construction.

Still, Circiumaru urged young women to get into the fields of construction and engineering, citing the monetary benefits as well as the entrepreneurial opportunities provided by the industry. Ashcroft similarly touted the field of real estate development: “There really isn’t a typical day in development, and that’s what I love about it,” the Rockefeller Group vice president said, adding how she’s found that “year after year, there are more women in [professional] positions” in the industry.

Lovshin and Rudin Earls wrapped up the event with a lively discussion about their own career paths and their firms’ partnership on the Dock 72 project. Rudin Earls (whose father, Rudin Management Company CEO and Real Estate Board of New York Chairman Bill Rudin, was in attendance and eagerly filming her keynote discussion on his cell phone) recalled how the family firm’s Greenwich Lane condominium conversion of the former St. Vincent’s Hospital in the West Village represented the first time she “started to feel a passion” for the family business.

Lovshin, a senior construction manager at Boston Properties, described the Dock 72 project as “our kid” in sharing a slideshow that highlighted the project’s architectural features. She noted how the building incorporates ample outdoor spaces and 35,000 square feet of amenities that, while traditionally “more of a residential thing,” have more recently become highly desirable features in new office developments. Lovshin added that Dock 72 us aiming for a temporary certificate of occupancy in the first quarter of 2019.