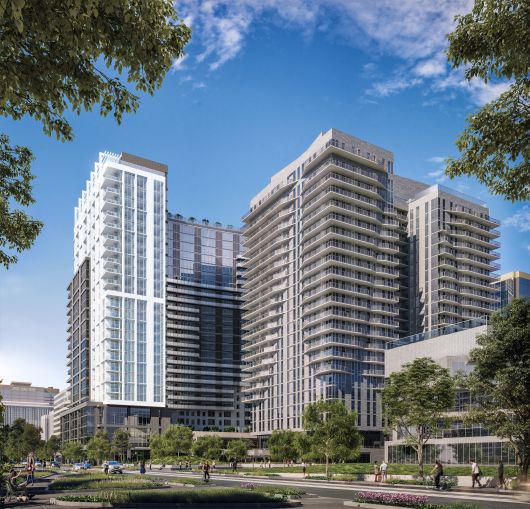 Rendering of The Highlands Photo: Penzance

Vida Fitness has signed a lease for 27,000 square feet at The Highlands in Rosslyn, Va., Commercial Observer has learned.

The Highlands is a 1.2-million-square-foot mixed-use development from D.C.-based developer Penzance. The project’s groundbreaking is today and the first phase is slated for completion in the second quarter of 2021.

Vida, a boutique gym with five locations in Washington, D.C., signed a 15-year lease at 1771 N Pierce Street on Oct. 1, according to a Penzance spokeswoman. She declined to provide the asking rent, but area retails rents are $50 to $80 per square foot, according JLL research.

The gym will be open to the public, as well as directly serve residents at one of three residential towers at The Highlands in fall 2021. “This allows Vida a creative way to expand its offerings and platform while providing The Highlands with a creative competitive advantage when leasing these standard-setting high-end apartments,” David von Storch, the founder and president of Vida, told CO.

Vida will offer a variety of services such as its trademark SweatBox concept, group classes and spa services, according to John Kusturiss, the vice president of development at Penzance.

“Washington, D.C., was voted the number one fittest city in the United States and its residents are highly educated [and] care about health, wellness and work-life balance,” Kusturiss said. “Vida is a multifaceted, best-in-class health and wellness provider that is very complimentary to what we are offering the residences and community-at-large at The Highlands.”

John Asadoorian of Asadoorian Retail Solutions represented Vida in the deal. He did not return a request for comment. Alex Walker of Miller Walker represented Penzance.

“We believe Vida Fitness will be an excellent amenity for its future residents and will create a vibrant community gathering place,” Walker said.

CVS will also take part of the 40,000 square feet of retail space at The Highlands, the Penzance spokeswoman said, adding that the firm is searching for a “complimentary food offering” for the remaining 4,300 square feet of available space.