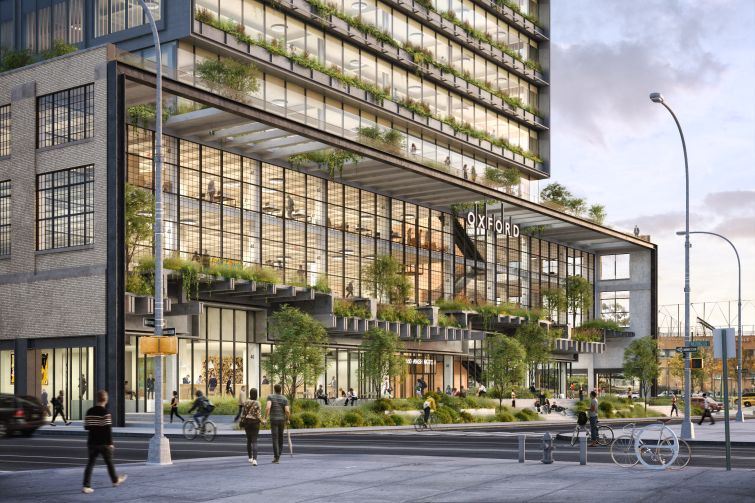 The Toronto-based developer aims to revamp the 1.3-million-square-foot former freight hub at 550 Washington Street, between Houston and West Streets next to Hudson River Park’s Pier 40. Renderings show that the four-story property will lose its top floor and get a nine-story addition. The existing floors are being renovated with modern, floor-to-ceiling windows on the northern and southern ends of the building, and the new structure will be outfitted with three different wraparound, landscaped roof decks and extensive plantings along the exterior and the ground floor.

Oxford, together with architect COOKFOX, will remove the overpass covering Houston Street on the north side of the building and expose the original railroad tracks that run through the two-block-long site. A release from Oxford touts the fact that the plan “incorporates three stories of the existing structure and showcases the original railbeds as a central design feature” and notes that the “building’s façade will allow for more than 400 linear feet of unobstructed west-facing views.”

“We felt a tremendous responsibility to re-imagine St. John’s Terminal in an authentic yet modern way,” said Dean Shapiro, the head of U.S. Developments at Oxford Properties. “St. John’s Terminal has a long history as a hub of innovation and productivity. Its unique form allows us to create workspaces that reduce the friction of expansion and change over time, so tenants can focus on productivity.”

The property was originally built as the southern terminal for the High Line elevated railway and was constructed to hold up to 227 railcars.

COOKFOX partner Rick Cook noted that the firm’s design “will preserve the history and authenticity of this important piece of rail infrastructure that once connected the world to New York City. By opening the site with the removal of the overpass and incorporating the rail beds, we’re connecting the building with the neighborhood, and at the same time creating a workplace that is connected with nature.”

Atlas Capital Group and Westbrook Partners sold the southern portion of the sprawling industrial complex to Oxford and the Canadian Pension Plan Investment Board for $700 million in January, giving Oxford a 52.5 percent controlling stake, as Commercial Observer reported.

In December 2016, the City Council approved a special permit to allow Atlas and Westbrook to develop the 3.3-acre parcel into 1,500 apartments, retail and office or hotel space. The two firms  paid $100 million for an additional 200,000 square feet of development rights, which also required city approval. Atlas and Westbrook still own the northern portion of the site but have not yet moved forward with residential development plans.