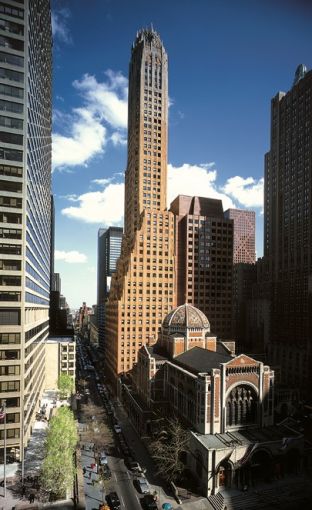 Cornell University has signed a 10-year lease to relocate its Manhattan digs for the Cornell SC Johnson College of Business to 19,500 square feet at 570 Lexington Avenue, Commercial Observer has learned, where the school already is the largest tenant in the building.

The new space spans the entire seventh floor and brings the university’s foothold in the building to nearly 90,000 square feet, according to sources with knowledge of the deal, which closed a couple of weeks ago. The school already leases space on the ninth, 10th, 11th and 12th floors in the 50-story Feil Organization building between East 50th and East 51st Streets.

“We do see this building as a key hub to our growing presence in New York City,” Jeremy Thomas, the senior director of Cornell’s real estate department, told CO. The space will house “a mix of classroom space and office or administrative space as well.” Punctuating the school’s status at the building, “there will be a Cornell flag on the outside of the building.”

As CO reported in February, Cornell’s Industrial and Labor Relations School inked a 10-year, 38,872-square-foot deal for the entire 11th and 12th floors of the 450,000-square-foot building (move-in is slated for December, Thomas said). And, Weill Cornell Medicine, the Ivy League institution’s medical school, signed a 10-year lease for 31,258 square feet comprising the entire ninth floor and part of the 10th floor at the landmarked Art Deco skyscraper (Weill moved in already).

Other tenants at the property include law firm Carroll, McNulty & Kull, executive compensation consultancy Pearl Meyer and the Real Estate Board of New York.

Cornell will relocate its business college from 45 West 57th Street when it assumes the space at 570 Lexington Avenue in the middle of 2020, a Cornell spokesman said. A couple of years ago, the school signed a lease at 45 West 57th Street for “to grow its presence in New York City,” per a Cornell Chronicle post.

Cushman & Wakefield’s Mark Weiss and Robert Eisenberg represented Cornell in the deal. David Turino represented Feil in-house. Spokesmen for C&W and Feil didn’t immediately respond to a request for comment, and nor did a spokeswoman for the school.

Update: This story has been edited to reflect that the space at 570 Lexington Avenue will be occupied by Cornell SC Johnson College of Business, and the move-in is slated for the middle of 2020.