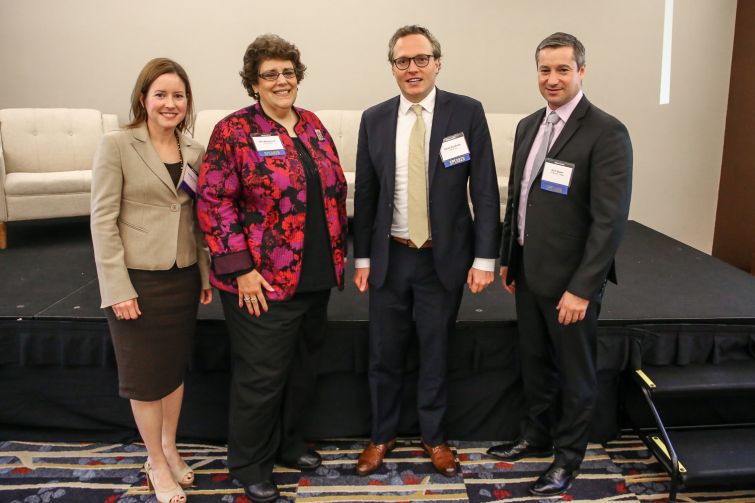 Betancourt joined Garrett Bjorkman, a product manager at CIM Mortgage Trust, and Kurt Stuart, the head of Chase Commercial Term Lending on the East Coast, to discuss the trends they’re seeing from their individual seats in the market, in the “Cash Overflow: A Look at Lender Appetites, Competition and Forecast” panel. Jennifer Bruton, a partner at Venable, moderated.

Millennials remain the key drivers of the multifamily market, Betancourt said: “Some baby boomers too, but the growth of multifamily rentals is almost entirely down to millennials.”

She continued to say that, despite recent press, there has only been a very marginal increase in the number of baby boomers abandoning larger single family residences for smaller multifamily digs. Betancourt added that roommates are becoming the fastest growing segment of renters, with one-bedroom apartments no longer being occupied by only one tenant.

But while the multifamily sector is the “belle of the ball” right now—with Fannie Mae and Freddie Mac both having banner origination years in 2017, market participants should keep a close eye on the sector’s demographics. Betancourt said the millennial effect tops out by 2024 and then—between 2025 and 2026—in comes Generation Z, described by Betancourt as the “most tech-savvy generation ever, born with an iPhone in their hands.”

While there are roughly 80 million millennials, Gen-Z comprises only 65 million people. The questions is, will that demographic cohort want urban core residences or—with their feet planted firmly in technological advancement—will they instead choose to work from home farther from urban areas.

CIM has lent $30 billion in total across asset classes, predominantly in the transitional space and with a preference for construction or heavy-repositioning opportunities. Bjorkman agreed that millennials are playing a big role in shaping the market, specifically in the redesign of existing buildings to cater to the demographic’s preference for a live-work-play environment. This has left owners “figuring out how to reposition assets,” he said.

When Bruton asked the panelists about changes in the lending landscape, Bjorkman said the increasing number of debt funds and the vast amount of capital in the bridge loan space has driven a distinct shift in the playing field recently, with competition heating up significantly and spreads compressing. He cautioned that every loan isn’t for every lender, and “understanding construction is something that people can’t always do in the bridge loan space.”

Bjorkman also warned of the risk in the amount of leverage debt funds’ are taking on through repo facilities, which he described as “very risky. The margin calls can be substantial,” he said. Bjorkman recommended that borrowers make sure their lender is well capitalized and can support their projects, otherwise those projects could be derailed.

When the conversation swung around to sponsorship, panelists agreed on its continued importance.

“It’s critical. Everything,” said Stuart, while Bjorkman noted: “Especially in development, and at this point in the cycle, a sponsor has to have good character and a good track record [to secure financing].”

Equally as important as we—almost, maybe, perhaps—near the end of the cycle, is for lenders to be true partners in the projects they are financing, Stuart said Chase is differentiating itself from the herd through its customer service, in addition to speed and certainty of execution. “Really it’s a question of ‘What lender is going to be there at the end of the day?’ he said.

While everything looks pretty rosy in 2019, we could experience a slight slump in 2020, Betancourt said. “We’re not using the ‘r’ word,” the economist added, referring to a recession. “But keep an eye on it, as it there may be a slowdown.”

Supply and interest rates are the industry headwinds Chase is paying close attention to, Stuart said. “But overall, the outlook is pretty positive,” he said.