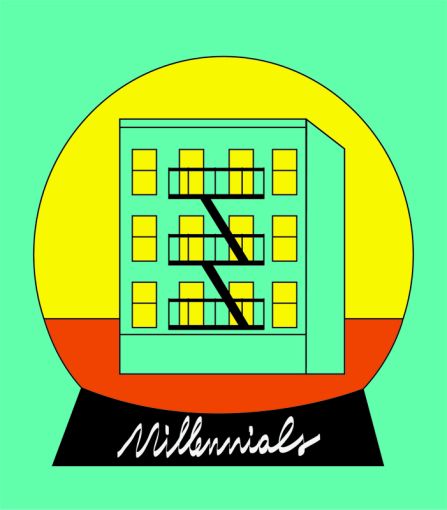 There’s more to them than BuzzFeed, Lena Dunham and unemployment. The ascendant generation—those oft referred to as millennials—is affecting our national housing market, possibly permanently.

Battered by the financial crisis, environmentally conscious and not willing to commit to long-term investment in a property, millennials—defined by the U.S. Census Bureau as Americans between the ages of 18 to 34—are eschewing home ownership, in a departure from previous generations.

As a managing director at Walker & Dunlop, Fannie Mae’s largest partner in multifamily lending in the last three years, Brendan Coleman has witnessed firsthand how housing preferences have been changing.

“I am 40, and when I got out of college all I wanted to do was to buy a house. It was the American dream,” Mr. Coleman said. “Today, everyone who is a little bit younger than me just doesn’t want to buy.”

Founded in 1937, Walker & Dunlop debuted on the public market in 2010 and since then it has aggressively expanded its lending business, acquiring competitors such as CWCapital in 2012 and Johnson Capital in 2014. Last year, Walker & Dunlop originated $11.4 billion of loans, up 35 percent from 2013.

The expansion was well timed with the recent growth of the multifamily market. The most impressive impact of the demographic changes, Mr. Coleman said, has been on the type of assets for which the company originates loans.

Today, the majority of multifamily developments the company lends on are no longer in the traditional suburbs, but in urban centers that are well connected with mass transportation and in pedestrian friendly areas, to meet the needs of young people who don’t want a car (or can’t afford one), Mr. Coleman said. Millennials also tend to be respectful of the environment and to want to live near the office, he said.

Rental vacancy rate reached its lowest point in over 20 years, just 7 percent, in the fourth quarter of 2014, according to the census. Meanwhile, homeownership dropped to 64 percent, the lowest since 1990.

The financial crisis is a major factor in young people’s housing choices, said Steven Guggenmos, director of multifamily research at Freddie Mac. Financial constraints are the main factor, for renters aged 25 to 44, keeping them from buying, showed a Freddie Mac survey.

For the multifamily sectors of Fannie Mae and Freddie Mac, and their delegated underwriting and servicing lenders, this means more business.

“There are a variety of sources for multifamily construction financing, but the two most frequently cited are banks and the Federal Housing Administration,” said MBA’s Mr. Woodwell.

The focus is on “metros with the highest percentage of college-educated millennials,” Kim Betancourt, director of economics and multifamily research at Fannie Mae, told Commercial Observer. Those include the Washington, D.C. metro area, Chicago, Miami, Seattle and parts of Philadelphia. These cities, Ms. Betancourt said, “have the best chances of seeing better-than-average multifamily demand, due to higher overall income levels and higher median single-family home prices.”

In 2015, millennials are projected to be 75.3 million, surpassing the projected 74.9 million baby boomers (aged 51 to 69), according to the census’s population projections.

In the 1980s, when boomers were in their 20s or early 30s, they tended to be married, drive cars and be employed, much more than the young people of today, census studies show. Even a 40-year-old such as Walker & Dunlop’s Mr. Coleman feels like he is part of the last generation to consider investing in a single-family home that serves as primary residence and the safest choice. “Today,” he said, “buying a home is seen as a great risk.”

The effects of this generation’s choices will have a long-lasting impact on the market.

The largest component of millennials, as Mr. Woodwell pointed out, is currently the group aged 20 to 24. It will take years before they will form a household and, eventually, buy a house—if they opt to. That bulge will increase the rental demand even further in the next few years, as more millennials move out of the parental home.

“Right now supply delivered into the market is insufficient to meet the need for rental housing,” said Freddie Mac’s Mr. Guggenmos. He estimates that about 440,000 units will need to be added to the national housing stock each year in the coming years.

“Because the U.S. population includes approximately 45 million people between the ages of 20 and 29, which is the cohort most likely to rent an apartment, overall demand is expected to remain in place, and as a result, the estimated national vacancy rate is not expected to increase significantly,” Ms. Betancourt said.

“Longer term,” said Ms. Betancourt, “multifamily fundamentals are even stronger, based on continued household formations, improving job growth and the forecasted continued increase of the 20-34 year old cohort—the next wave of new millennials, so to speak—over the next 10 years.”