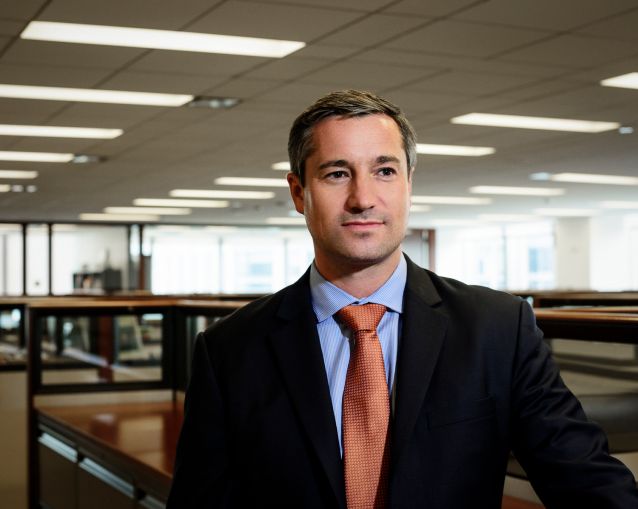 Kurt Stuart has had an exciting ride of late. The 36-year-old, just slightly outside of the cut-off for Commercial Observer’s 25 Under 35 list, is a father of 2-year-old triplets and just moved from Southern California to New York City to lead J.P. Morgan Chase’s commercial term lending [CTL] business in the Northeast. He replaces Chad Tredway, now co-head of the bank’s real estate banking business with Priscilla Almodovar. Stuart undoubtedly has big shoes to fill, but Tredway has complete confidence in his successor. “I am thrilled,” Tredway told CO. “Kurt has successfully proven himself as a leader. His ability to cultivate exceptional employees, provide guidance in the community and offer excellent service to our clients will help us maintain Chase’s leadership position in the market.”

Now, it’s time to get down to business and for Stuart to get up to speed on New York City’s many market nuances. He has his own way of educating himself on the  location of the bank’s assets that would make Forrest Gump proud—by putting his running shoes on and jogging around them.

Commercial Observer: Are you from California originally?

Stuart: I actually grew up in the suburbs of Chicago. My mother was in education, and my father worked as an accountant for the state government. They both worked really hard so that my brother and I had ample opportunity to explore a wide variety of activities. I grew up playing sports—I played basketball, soccer and baseball through high school. I also started piano lessons when I was 3. I played the violin in grade-school orchestra, and I played the guitar.

Do you still play?

A little, yes. When I have time.

Do you think those childhood activities helped to shape you as an adult?

I think the diversity helped to develop my sense of curiosity, and it helped me to realize that you can do anything you want if you’re willing to work at it. I grew up with that value set, went to University of Illinois in Chicago, not a big school, and graduated with a finance degree from there.

During my sophomore year [in college], I was in an internship [at GE Capital], and one of my colleagues came to me and said, “I challenge you to do the Chicago marathon in the fall.” The one thing I didn’t do [from a sports perspective] was run cross country. He told me, “There’s no way you’re going to finish, you’ve never run a race before.” Like any typical 20-year-old kid I thought I was invincible and could do anything, so I said, “Not only am I going to finish, I’m going to beat you.” Which was an ambitious goal. I remember walking out of the room and immediately Googling, “How to train for a marathon.”

Why that piqued my interest in real estate was, starting the next morning, I said, “O.K., every morning I’m going to pick a direction and just run.” And I did. It ended up being a great way to learn the neighborhoods. You see how they change on a block-by-block basis and how real estate plays a role in transforming communities—which I found fascinating.

Did you beat your colleague?

How long were you with GE?

The internship I mentioned was supposed to be a three-month gig. At the end of those three months, I somehow finagled my way into another two years with them and was offered a role in GE’s financial management program post-graduation, which is an intense leadership program where you rotate around its businesses every six months. A colleague at the time convinced me to work in GE’s originations group in L.A. I was super excited about the role, but I started in July 2007, so at the peak of the last real estate crisis I was going to go be in originations, focused on high-leverage bridge debt on transitional assets. My timing was awful.

Needless to say, that didn’t last for long, and in 2009 our business changed strategy, and I joined our asset management team. For the next four years I was doing loan sales, asset sales and restructuring debt. I learned more during that time than I probably would have done in 10 years in an upcycle. It’s a tremendous crash course on what can work and [what] doesn’t work in real estate.

What was the most valuable lesson you learned?

A mentor once shared the Nelson Mandela quote with me, “It is better to lead from behind and to put others in front, especially when you celebrate victory when nice things occur. You take the front line when there is danger,” and that became very impactful during the financial crisis. From a leadership perspective, danger in the context of the business world is uncertainty and during the financial crisis there was boatloads of uncertainty. So, I got to see how leaders adapted their style and led their teams through that challenging time. I was in that role until 2013, when our business had pivoted back to growth mode.

Yes. I had a friend who introduced me to several of the leadership team members within the commercial real estate business here. I’d explored several opportunities, but I was always very drawn to the people I’d met at Chase. They’d built up a multifamily business that turned out to be the No. 1 lender in the country, but they were humble, and so we shared a similar value set. I knew after my first interview they were people I wanted to work with and a month later I had one final interview. It was seven days after my wife [Sarah] had given birth to our [triplets]. I remember telling my wife, “I hope that my excitement shines through, given the fact I haven’t slept in a week.” Fortunately, it did. They had an opportunity to lead the multifamily team in Southern California, and I was fortunate enough to be offered it.

How did the opportunity to lead the CTL business in the Northeast come about?

What kick-started it was Chad Tredway and his team building a tremendous presence out here. That success allowed him to take on some additional challenges within the firm, and I was lucky enough to be surrounded by a great team in California. The success of those two things allowed me this opportunity.

The good news is that investors invest and borrowers borrow for the same reasons in California as they do in New York. For me the learning curve consists of, one, as a leader, positioning my teams here to win; two, continuing to foster and grow relationships with some of the great clients we have in the Northeast; and three, learning the nuances of the submarkets. I’m going to bury myself in market reports and talk to market participants, but I plan to learn that the same way I learned the neighborhoods of Chicago.

By running around them?

Absolutely. There’s a lot of value in a good pair of running shoes. This morning I took an Uber up to the Bronx and ran 15 assets that we have up there. I did the Upper East Side today and saw six assets, and I’m going to do the East Village tomorrow.

What’s your primary focus as the new head of CTL?

Our commercial term lending business in multifamily is largely focused on workforce housing. We’re in 10 markets around the country, and they all have similar characteristics—high barriers to entry, high cost of housing and a very large renting cohort. We focus generally on smaller balance loans, our average loan size is around $2.5 million to $3 million. Not to say we can’t do larger loans, but based on the client base we focus on that’s what we cater to.

Your team has grown from 28 to 150 with the move, how do you feel about that?

Leadership for me is a privilege, and whether that’s one person or 150 people I keep in mind that my  success as a leader is ultimately determined by the success of those around you. So, my biggest priority in this role is to find ways to help my team succeed.

Where in the real estate cycle are we now?

It’s hard to pinpoint what inning we’re in, but ultimately we’re not focused on where we are in the cycle but rather on building the right capabilities so we can continue to deliver for clients throughout any point in it. In terms of the lending market today, it’s still pretty healthy.

What are your goals for the CTL business?

The near-term goals are to build on the great momentum that we’ve had here. In the long-term, our goal is pretty singular. We’re in three markets in the North East—New York, Boston and D.C.— and we want to be the lender of choice in all three of them. We’re going to do that by fostering a culture that is absolutely obsessed with how we service our clients. And then we’re going to arm our sales teams with a product that is market-leading in the sense that it delivers on two fundamental needs of clients—speed, and certainty of execution.

Chad Tredway told us that J.P. Morgan Chase places a lot of value on its young professionals—what do you think that says about the bank?

The bank invests in talent, and we’re going to carry that through in the CTL business as well. Our leadership is focused on people that have good ideas and bringing those ideas to life. They’re going to continue to invest in folks who want to drive those ideas forward to move the business forward.

On a personal level, what do you want to accomplish by the year’s end?

A lot of morning runs around the neighborhoods [laughs]. And getting out there and learning more about our clients and their needs and how we can better service them.

Do you have a mentor?

I have several, which is a great problem to have. Alfred Brooks [head of J.P.Morgan Chase Commercial Banking’s commercial real estate business], Ed Ely [head of Chase commercial term lending] and Greg Newman [California area manager of multifamily lending for Chase] have been instrumental in helping me, and Chad Tredway of course.

Do triplets run in your family?

No, just a stroke of luck. They rule the roost.

Would you be happy if they ended up in real estate?

It’s a little early to tell what they will be when they grow up. Right now we’re focused on getting them through the living room without finding the knife drawer [laughs]. I just want my kids to find something they’re passionate about, and be really good at it—if they do that I’ll be happy.

What’s your favorite thing about New York so far?