Blackstone Pulls In $3B of CMBS Debt to Finance Industrial Portfolio 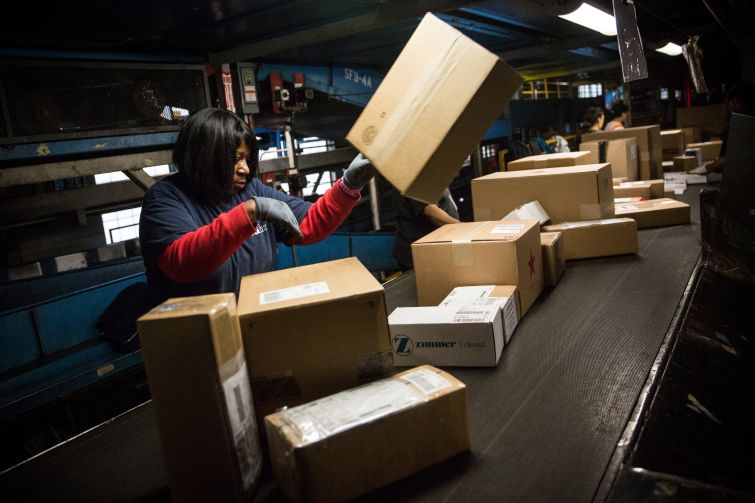 A woman works in a Fedex warehouse in Newark, N.J. Photo: Andrew Burton/Getty

In one of the biggest commercial real estate loans of the year nationwide, Bank of America and Citi Real Estate Funding have paired up to provide $3 billion in debt to Blackstone against a portfolio of 171 industrial buildings throughout the U.S., according to Morningstar Credit Ratings, which analyzed the commercial mortgage-backed securities transaction.

The senior aspect of the financing, $2.5 billion in CMBS debt, will be securitized into the forthcoming BX 2018-IND transaction, and the lenders will also extend $500 million in mezzanine credit outside of the CMBS trust. The securitized portion consists of a two-year loan with three one-year extension options, for which Blackstone will pay floating-rate interest of Libor plus 1.42 percent, with only interest payments due before maturity.

The mezzanine debt, further split into senior and junior tranches of $300 million and $200 million, comes at interest costs of Libor plus 4 percent and Libor plus 5.5 percent, respectively.

Blackstone’s portfolio, spread across 22 states, sums to 46.4 million square feet of industrial space. One hundred twenty nine of the buildings are warehouses leased to tenants like Amazon, FedEx and Clorox, the consumer-products manufacturer. Another 23 of the facilities are factories, and the remaining dozen-and-a-half are split among cold storage, data centers and truck terminals. Illinois, South Carolina and Texas top the list of states with the highest concentration of facilities that secure the debt, with 31, 26 and 19, respectively.

Chicago, Indianapolis, Ind. and Dallas are the portfolio’s most concentrated cities.

Filling rolling vacancies at the buildings should keep Blackstone busy over the loan’s term, with an average of nearly 5 million square feet of space in the portfolio up for renewal each of the next five years. In 2021, the densest year for lease expirations, more than 8.6 million square feet will come on the market—nearly a fifth of the entire portfolio.

The portfolio is on track to take in just shy of $200 million in net rental income this year, according to Morningstar, 13 percent above last year’s rake. At the same time, operating expenses are on track to climb more than $7 million year over year in the face of higher real estate taxes and insurance costs. Citi and Bank of America underwrote the loans to a debt service coverage ratio of 1.36 and a loan-to-value ratio of 70.1 percent for the CMBS portion of the debt, on an appraised portfolio value of $3.57 billion. Including the mezzanine loan thins the LTV ratio to 84 percent.

Andrew Egan and David Sondesky, Morningstar’s lead analysts for the transaction, singled out the portfolio’s geographic diversity and its long list of tenants as good omens for the loan, because major problems in a particular region or at a particular firm would only affect a small portion of the deal. Based on tours of some of the properties, they said that connectivity to transportation infrastructure is also a plus.

“A recurring theme heard from the…representatives guiding the tours was that the tenants decided to lease the respective properties because of access to intramodal shipping methods,” they wrote.

Potential pratfalls of the transaction include a relatively low prepayment fee, which the analysts said might not do enough to discourage Blackstone from paying down the debt early to avoid interest payments. Thirty-six of the buildings are also leased to just a single tenants, which could bring trouble if those companies stumble.

Blackstone has displayed an insatiable appetite for CMBS financing in 2018, with this deal coming on the heels of $1.1 billion in securitized debt it borrowed in May against a portfolio of luxury hotels. The gigantic investment company posted firm third-quarter results yesterday, noting that its assets under management had swelled to $457 billion. Its real estate holdings were up 8 percent year over year.”We continue to execute on our mission to be the best in the world at what we do,” Steve Schwarzman, the company’s CEO, said in a call to investors.

A Blackstone spokeswoman did not immediately respond to a request for comment.