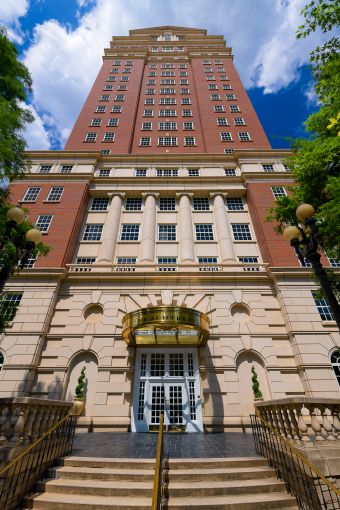 The loan—made to a partnership between funds managed by Oaktree Capital Management and an affiliate of Miami-based Banyan Street Capital—repays existing debt on the 345,254-square-foot property and funds future leasing costs and capital expenditures.

“We are pleased to develop new ties with Oaktree and continue our lending relationship with Banyan Street, an experienced owner and operator with a strong track record in the Atlanta market,” Square Mile Vice President Eric Cohen said in prepared remarks. “Since its acquisition of the property in 2015, the partnership has modernized the property and successfully executed on its leasing plan. With new capital made available through this financing and positive momentum in the Midtown market, we feel the property is well positioned for continued success.”

The property was erected in 1989 and is centrally located in the Midtown submarket of Atlanta. It comprises two nine-story wings surrounding a 10-story glass atrium in its center.

The partnership acquired a 91.7 percent condominium interest in the property in November 2015 with a $48.6 million acquisition loan from PCCP, Commercial Property Executive reported at the time of the purchase.

A $2.5 million renovation was completed in May, its leasing agent CBRE announced, including a complete redesign of the building’s atrium lobby—which now features an art installation by Dutch artist Peter Gentenaar—and the development of new tenant spaces.

Building amenities including a conference facility, a fitness center, a cafe with outdoor seating and an underground parking facility.

And Banyan Street has had an active year, too. In April, MHP Real Estate Services announced it was selling 60 percent of its company to the real estate investment firm and that the two firms were uniting to form a private real estate business with properties—either owned or managed—valued at more than $3 billion, as previously reported by CO.

Officials at Banyan Street and Oaktree Capital Management could not immediately be reached for comment.