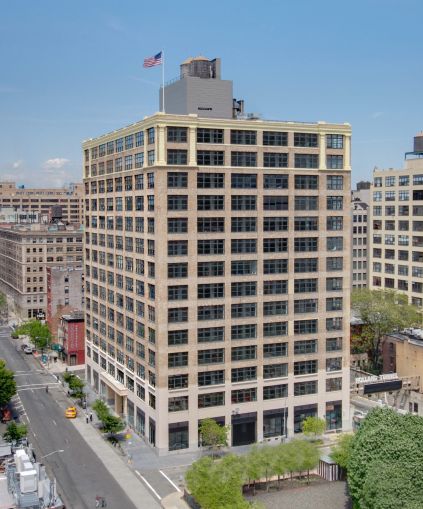 Office provider Knotel will open a new location in Hudson Square before the end of this year after inking a lease for 19,563 square feet at 250 Hudson Street, Knotel and landlord Jack Resnick & Sons announced Thursday.

Knotel is taking a portion of the third floor at the 15-story, 400,000-square-foot office building between Broome and Dominick Streets. The workspace provider—which designs, builds and operates offices for small to mid-sized companies that take space from Knotel via flexible, usually short-term arrangements—is slated to open its new location in December.

Asking rent in the deal was $80 per square foot, according to the landlord, while the length of the lease was not immediately clear. Michael Morris and Greg DiGioia of Newmark Knight Frank represented Knotel in negotiations, while Brett Greenberg and Adam Rappaport represented Jack Resnick & Sons in-house.

Eugene Lee, the global head of real estate and business development for Knotel, said the deal is indicative of the office provider’s “rapid growth” in the Downtown office market. “We are excited to make 250 Hudson Street available to the many companies seeking agile offices on flexible terms at Knotel,” he said in a press release announcing the transaction.

Jack Resnick & Sons President Jonathan Resnick described Knotel as “an excellent addition” to a building that “has become a magnet for innovative and entrepreneurial firms,” according to the press release. Other office tenants at the property include public relations firm Edelman, Bed Bath & Beyond, Gluckman Tang Architects and advertising firm Mekanism, which agreed to take nearly 28,000 square feet at the building earlier this year.

The New York Post first reported news of the Knotel lease. Representatives for NKF could not immediately be reached for comment.

Knotel now has more than 1.5 million square feet of office space under management across more than 70 locations in New York, San Francisco, London and Berlin.