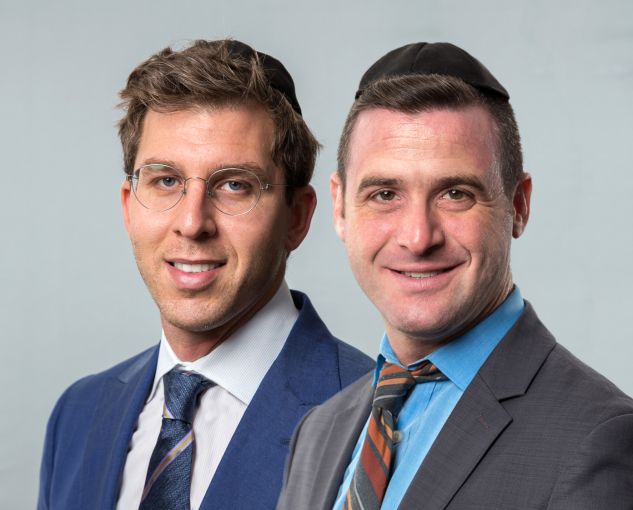 Meridian Capital Group’s Shaya Ackerman and Shaya Sonnenschein love a challenge. The debt-arranging duo first joined forces in 2005 and have been closing deals—the more complex the better—ever since. Recent transactions include multiple condominium de-conversions in Chicago, including a $72 million deal with Ladder Capital on behalf of Strategic Properties of North America and a $70 million repositioning of the 2-million-square-foot Bell Works office campus in Holmdel, N.J.

Commercial Observer: How did you two first meet?

Shaya Ackerman: I started at Eastern Union Funding in late 2005 and Shaya was already at the shop. We connected during my first year on the first retail deal I brought in where he was doing some underwriting. We’ve been working together ever since. I came over to Meridian in 2014 and Shaya six months later. We complement each other nicely; he works well in the trenches and I’m a little more in the forefront of the deals, so it’s a nice little mix.

Shaya Sonnenschein: We had a funny thing when we first started working together. Shaya sent me an email with an attachment that was far too large for the company’s server so I gave him my Gmail account, which had my birthday in it. He thought I was messing with him because we have the same birthday. [Three years apart, Ackerman is 36 and Sonnenschein is 39].

The debt arranging business is a competitive landscape right now. What differentiates you from other brokers in the space?

Ackerman: I don’t think there’s any secret sauce, it’s about working hard and getting out there. But you really have to listen to your clients and understand their needs. Brokers can be very fast to push product that they’re trying to sell or the bank that they have money from and so on, but understanding your client’s needs in structuring deals is key. Some clients need some TLC on the front end in structuring deals to help with their equity position; some guys have that side of it already and are lacking on the debt side. It’s a case of understanding their business plan and the deal. I think it’s every good broker’s job to know the deal better than their client.

Sonnenschein: One scenario we had recently was with a client who was looking at a deal and he had a pile of utility bills to review and was feeling overwhelmed, so I said, “We’ll go through them for you.” We need to know the deal better than him, and we need to understand the trends and use our experience to be of value to him.

I would guess that experience also gives you a competitive advantage over the newer brokers in town?

Ackerman: Yes. We recently signed up a $250 million construction loan in New Jersey. A different broker was involved at first, but he didn’t make any headway with the deal after three or four months. The [sponsor]  called me and I signed it up a week later. The other [broker] was out there trying to get bank quotes for 60 to 65 percent leverage and I realized that the borrower didn’t want to put in $100 million of equity, and that he’d rather we got him higher leverage so he can put in $40 [million] to $50 million and get 85 to 90 percent leverage. The first broker [complained], “I didn’t know you were going to pay interest rates that high, I thought you wanted conventional bank rates of 3 to 4 percent.” The same thing happened to me a few years ago too, but you have to learn. You have to talk to your clients and understand their needs and preferences. Above all, the most important thing that’s probably the hardest thing is just constant communication. Good news, bad news, no news—you always have to communicate.

Is there such a thing as a typical transaction for you?

Ackerman: We do enjoy working structured, complicated deals. I feel like the market is tougher today and every deal needs a little TLC. I think the concept of “vanilla” deals is not around any more; there’s a lot of working through the numbers. We do a lot of land, ground-up construction and renovation loans. We’ve done a number of condo de-conversions in Chicago; we’ve done five or six of those deals. We’ve very familiar with Section 15 [of the Illinois Condominium Property Act,which governs de-conversions] and we’re busy educating lenders.

The first condo de-conversion we did was very hard. Buying 300 condo units and closing them all in a day, and it’s a long drawn-out process dealing with 300 different sellers. You can imagine structuring a loan and dealing with appraisers and understanding every unit in the deal. The challenges are deathly hard, but it got a drop easier with the second deal we did.

Sonnenschein: Understanding the debt piece, the equity piece, the communication and how information is communicated is something that’s as critical as coming up with the business plan. It’s what gives everyone the comfort they need to get into the deal.

Do you have many repeat clients?

Ackerman: We have 50 to 100 clients and they each do a few deals per year. It’s a competitive market and you’re only as good as your last deal. So you can’t let go, there’s always that new broker out there chasing your client.

You said there are less vanilla deals out there; is that clunkiness a function of where we are in the market cycle?

Ackerman: There’s no question that deals are tight and more complex and everything is getting stretched. It’s hard to know where we are in the cycle because it still seems there’s a ton of liquidity in the market. I had dinner with a guy recently who is working on an industrial deal in New York. He had quotes from two brokerage shops. I said give me 24 hours, and I’ll beat whatever you have. I did it. He had 80 percent [leverage]; I got him 85 percent. There’s always a way to get deals done but they are getting tighter and tighter.

Are there any new product types that you’ve ventured into?

Ackerman: It’s been an educational process but we’ve been doing some HUD [Department of Housing and Urban Development]loans recently. We’re refinancing a loan now that the agencies came in at around $31 million, then we got $37 million in HUD money. It’s 35-year money at 4 percent so we’re getting around 20 percent more proceeds at a far cheaper rate locked in for 35 years. It takes six to nine months to close the deal, but it’s great bond-like money.

Sonnenschein: Both Shaya and I have closed HUD loans before. I actually closed a $100 million HUD loan a number of years ago on 16 properties, so I’ve been through the process. It involves a lot of handholding, and you really need to know the process better than the client; otherwise, you’ll have frustration from day one. That great thing in this recent deal was coming up with the HUD solution, walking them through the deal and now closing it and saying, “Hey we got them something they couldn’t anticipate in the beginning.”

Are you seeing more debt fund entrants competing for deals, or has it leveled out?

Ackerman: It’s leveled out the past six to 12 months, but there’s more money than deals. That said there are far fewer for the tough deals and for the bigger deals. I think some guys will get flushed out over the next 12 to 24 months because they’re struggling for product.

Sonnenschein: I think the creativity of the loan structuring comes in to play. The creativity is what’s needed to take what one person will see as two static lenders and figure out a way to merge them and create a loan solution.

Ackerman: It still feels healthy. Rents continue to go up and there’s still growth so it still feels like things make sense. It remains to be seen where interest rates go, that could change the playing field.

Sonnenschein: We’re seeing transactions, we’re seeing people continue to buy and there’s a lot of construction going on in the city. When we look at the playing field right now it’s robust and exciting. I think it’s a lot to do with experience. I think we’re smarter than we were 15 years ago. We’re lending smarter, building smarter and buying smarter, and that experience is allowing people to keep transacting.

Ackerman: There are always cycles and always corrections, but corrections create opportunities. Whether it’s in buying properties or deleveraging or restructuring.

Are you seeing lenders favor any particular markets right now, or is it still sponsor and asset-specific?

Ackerman: Still asset and sponsor-specific, I’d say. The easiest asset class [to finance] is multifamily, then office. We’ve done a bunch of industrial and storage deals recently, too.

I actually got a deal last night from the same client who gave me 24 hours to beat his best offer [in another deal]. He said: “I have another situation where a guy came to me and can’t close. He wants me to take over this industrial deal in Florida. You have 24 hrs. Work this out.” And you know what, we’ll get it done. That’s what we do.

You enjoy the challenge?

Ackerman: I love a challenge. You call me up and say, “Beat it and it’s yours”? That’s all you have to say.  I’ll do it.

Sonneschein: We have a good system where Shaya will bring it in and we’ll work to understand it and work through the night getting familiar with it so we have that edge. Every year has been busier than the last and, knock on wood, 2018 will be our busiest year so far. We have big goals and hope to achieve them.

So you’re also challenging yourself to have a better year? I see a trend here.

Ackerman: [Laughs.] Yes! That’s what we do every single year.