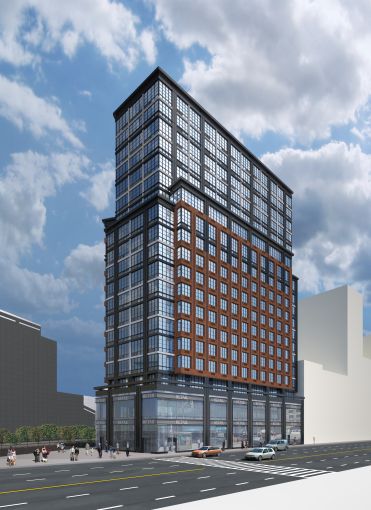 The financing closed last week and replaces roughly $110 million in debt from 2015; an $80 million senior loan provided by Wells Fargo and a $30 million mezzanine loan from Winter Properties, The Real Deal reported at the time.

Situated on the intersection of Flatbush Avenue and Fulton Street, the almost-completed 170,000-square-foot project will include 183 multifamily rental units—of which 37 are affordable—and 25,000 square feet of retail space on the ground and second floors.

The 19-story property is expected to receive a temporary certificate of occupancy in the next few weeks, Slate Property Group Principal David Schwartz told CO, after which lease-up of the apartments and retail will ensue.

Schwartz said there has been significant interest in the property’s retail portion, and the firm is currently in negotiations with prospective tenants interested in the prime location.

“One Flatbush Avenue sits at the intersection of the best areas in Brooklyn,” Schwartz said. “Fort Greene and Boerum Hill are right next to it and Park Slope and Brooklyn Heights are nearby. It’s a great area that’s seen dramatic growth recently, there’s so much activity.”

Amenities at the Hill West Architects-designed building will include a fitness center, a yoga studio, a game room, outdoor entertainment space and a rooftop deck.

Schwartz said that Slate is constantly eyeing other potential acquisition and development opportunities in the area. “We’d love to have another asset there,” he said.

The transaction marks the developers’ first financing with Mack but, “We were excited to work with them, and looking forward to doing more deals with them,” Schwartz said.