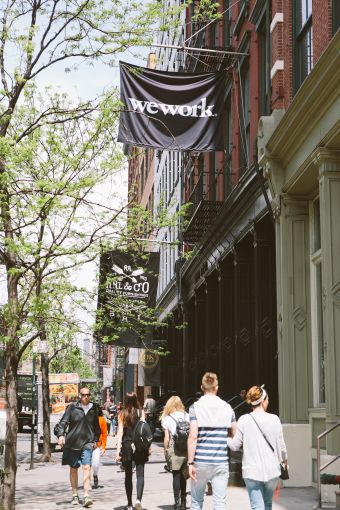 Coworking giant WeWork is looking more and more like a traditional real estate company and the launching of a real estate advisory services division punctuates that point.

Come September, the eight-year-old company will kick off WeWork Space Services in New York City, a business targeting small and medium-sized firms (read: 10 to 250 employees in 2,000 to 5,000 square feet) that either grew too big for a WeWork or passed on a WeWork space. Included in the lease: a one-year WeWork membership. While it will not technically be a brokerage, the team will provide real estate services to tenants.

The company hopes to turn the brokerage model on its head with the use of consultants to do real estate deals.

“One of things I hope we can do is change a little bit of the profile of the broker,” David Fano, WeWork’s chief growth officer and head of the initiative, told Commercial Observer. “I don’t mean this in a bad way. I think brokerage has needed to be transactional.”

After helping their client lease space, a WeWork adviser could then try to get them to buy into the company’s other services like flexible space, memberships, or one of its 250 partnerships for things like insurance and loans.

WeWork Space Services “is part of a broader strategy to really add value to this medium-business segment,” Fano said.

Jason Bauer, the CEO of Voda Bauer Real Estate and the founder and former CEO of Crumbs Bake Shop, has been tapped to lead the team (Avi Voda, Voda Bauer’s other co-founder, joined, too), which Fano said would number 10 to 12 by launch date. (Bauer wasn’t immediately available to provide comment.)

The new arm will focus on all of New York City, with an emphasis on Manhattan. The team will be distinct from WeWork’s 130-person real estate team (comprised of employees) that finds real estate for WeWork, and the 500-person sales team that helps sign up members.

Members of the WeWork Space Services team will be commission-based with a 50-50 split, but will make more “if they source their own leads,” Fano said.

Will WeWork’s advisers, who will bounce around at WeWork locations with a loose base at WeWork’s Manhattan headquarters at 115 West 18th Street, steal clients from outside brokers bringing in business to WeWork? (WeWork already gives commissions to outside brokers who bring tenant to WeWork.)

WeWork’s spokesman Arif Shah assured that “it shouldn’t have an impact on brokers bringing us clients.” He added: “If a broker brings a client to us and the client doesn’t stay with us…the details are not passed on to the [advisory] service.”

Fano added: “As far as we’re concerned, accounts are accounts and accounts belong to those who bring those accounts.”

Office broker Louis Puopolo, the co-head of operations at Douglas Elliman Commercial, isn’t so sure that WeWork will be able to maintain that cone of silence.

“We as real estate agents know they will [share the information among themselves],” Puopolo said. “It’s very hard not to.”

While he doesn’t place his tenants in WeWork spaces, he said he would “think twice” about doing so knowing that after their short-term lease is up, it would only be natural for the tenants to turn to WeWork’s in-house consultants to help them find their next space, in a WeWork space or elsewhere. It’s not like brokers at traditional firms can stay in touch with all of their former clients.

This one-stop-shop approach sounds similar to what Compass is doing on the residential real estate side. As The Real Deal reported yesterday, the residential brokerage is looking to expand its brokers’ arsenal, wanting their agents to sell a lot more than just a home. Seventy to 80 percent of their earnings are now expected to come from title and mortgage, escrow and move-in services as well as furniture sales, the publication noted.

“It think this is a great idea for WeWork,” said office broker Bert Rosenblatt, a principal at Vicus Partners. “I simply see it as another WeWork product offering and another way to take over the world.” He added: “That said, like everything else in life, it is all about executing on this idea and making it work.”

“I think this is a disaster for the tenants because WeWork has positioned themselves as a landlord and now wants to control the brokerage community,” Bobrow said.