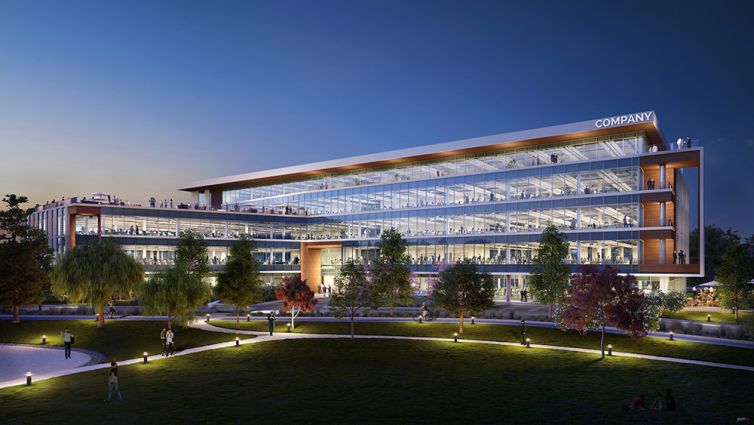 A rendering of the Ameswell office building. Courtesy: HFF

Wells Fargo has provided $140 million to a joint venture between Broadreach Capital Partners and Rockwood Capital for the construction of Ameswell Mountain View, a mixed-use project in Mountain View, Calif., according to the deal’s broker, HFF.

With a total project cost of $250 million, Wells Fargo’s debt accompanies  $110 million in joint venture equity from the two borrowers.

The terms of the construction financing could not immediately be ascertained as officials at Rockwood were not immediately available for comment. Officials at Broadreach could not be reached, and a representative for Wells Fargo did not return comment before publication.

HFF, on behalf of the developer Palo Alto, Calif.-based Broadreach, arranged the equity partnership with Rockwood and then secured the Wells Fargo construction debt on behalf of the joint venture.

The mixed-use project—located at 750 Moffett Boulevard—will feature a 255-key hotel called the Ameswell Hotel and a 216,700-square-foot Class-A office building in Mountain View, Calif., which borders Palo Alto to the southeast. Google, Amazon, Microsoft, Apple and Intuit are all located within a 2.5-mile radius of the site. Ameswell is also within a mile from the area’s Caltrain Baby Bullet train stop in Mountain View.

“With a submarket vacancy rate of less than five percent for Class-A office in Mountain View, Ameswell is poised to capitalize on the abundant tenant demand for new product,” HFF Senior Director Ben Bullock, who was part of the firm’s debt and equity placement team for the deal, said in a statement.

The Ameswell office building will include floor-to-ceiling glass windows, 14-foot ceilings and 47,000-square-foot floor plates. The planned property will also include a 2.5-acre park, terraces, bike and pedestrian trails, electric vehicle-charging stations and a six-story parking garage. Construction is expected to wrap sometime in 2019, according to information from Broadreach’s website, although an exact date was not given.

The Ameswell Hotel will host food and beverage offerings, including a bar and restaurant, and a curated grab-and-go market. It will also have outdoor gathering spaces, a swimming pool, fire pits, a bocce ball court and 6,258 square feet of meeting and event space, according to HFF.

Mountain View’s City Council voted 4-3 in June 2014 to sign off on a proposal to open negotiations with Broadreach on the new development. In July 2016, the City Council unanimously approved Broadreach’s development plan. The Mountain View Voice reported in 2016 that Google will be housed in the office building, although that now could not be confirmed, and the office’s leasing agents at Newmark Cornish & Carey could not immediately be reached for comment.

As part of the project, Broadreach agreed to pay $18 million to Mountain View for a series of transportation improvements to the area as the development is expected to generate about 340 new vehicle trips to around the location, according to the Mountain View Voice. There were concerns that more traffic caused by the project might affect growth in the area, while Broadreach claimed its parking structure would help accommodate additional congestion.