The Long and Winding Ownership History of the Plaza Hotel

With its $600 million purchase of the iconic Midtown property, Qatar-backed Katara Hospitality becomes the latest to own one of New York City's true trophy assets 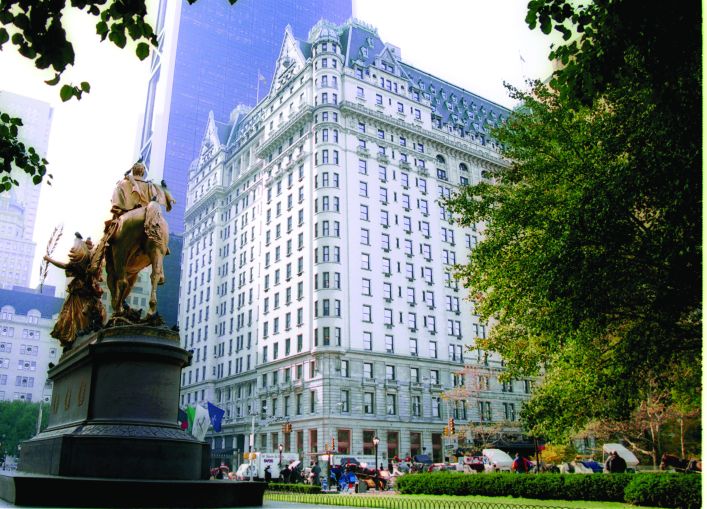 Earlier this month, it emerged that Katara Hospitality—a subsidiary of the sovereign wealth fund of the tiny, oil-rich Gulf nation of Qatar—had agreed to acquire the iconic Plaza Hotel in Midtown for the price of $600 million. The deal represents the latest chapter in the long and rather convoluted ownership history of the famed neo-Renaissance-style hotel at the corner of Fifth Avenue and Central Park South—one that has seen the 111-year-old property trade hands through the decades between legendary tycoons, international billionaires and, famously, the sitting president of the United States.

While the sale of the Plaza came as no surprise—the building had been on the market for years—the identity of Katara as the buyer did. The hotel owner, developer and operator, which is backed by the state-owned Qatar Investment Authority (QIA), came out on top of several other bidders who were vying to acquire the Plaza from previous majority owner Sahara India Pariwar, the Indian conglomerate led by businessman Subrata Roy. Roy has been beleaguered by financial and legal issues in his native country in recent years—issues that resulted in him serving a stint in prison—and as a means of raising billions of dollars in court-ordered restitution, Sahara had been seeking to offload its stake in the hotel, which it acquired for $570 million in 2012 from Elad Properties, the New York-based real estate arm of Israeli billionaire Yitzhak Tshuva’s Elad Group.

Among the parties reportedly in for the Plaza this time was a partnership between minority owners Ashkenazy Acquisition Corp., the New York-based firm helmed by developer Ben Ashkenazy, and Kingdom Holding Company, a Saudi Arabian conglomerate led by Saudi Prince Al-Waleed bin Talal. In May, The Real Deal reported that Ashkenazy and Kingdom, who together owned a 25 percent stake in the Plaza, had scuppered a separate $600 million bid for the hotel from New York developer Kamran Hakim, of the Hakim Organization, and Shahal Khan, of Dubai-based Trinity White City Ventures, by exercising a right of first refusal that they had on the asset.

That made it all the more startling when the news broke on July 3 that Katara, whose interest in the Plaza had previously gone unreported, was the entity that had won the right to purchase perhaps the most famous hotel in the world—a property that, since it first opened in 1907, has come to hold a preeminent place in American popular culture.

The Plaza, after all, has served as the setting for the famous Eloise children’s books and even made an appearance in the Great American Novel itself, F. Scott Fitzgerald’s The Great Gatsby (Fitzgerald and his wife, Zelda, frequented the hotel). It’s been featured in numerous films including Alfred Hitchcock’s North by Northwest and Home Alone 2: Lost in New York (the latter featuring a cameo by then-owner Donald Trump). When the Beatles arrived in America in 1964, they stayed at the Plaza; when Truman Capote threw his legendary Black and White Ball in 1966, he held it at the Plaza; when Michael Douglas and Catherine Zeta-Jones were married in 2000, in one of the most high-profile celebrity weddings in recent memory, they held their nuptials at the Plaza.

“Every tourist I’ve ever met, every [tour] group I’ve ever had, they all know the Plaza Hotel,” according to historian Kevin Draper, the founder of New York Historical Tours. “What makes it a trading card that everyone wants to own? If you say you own the Plaza, it means something.”

The Plaza, Draper said, has embodied “power, wealth and high society” in New York since it first opened in 1890 (it was later demolished and rebuilt to a larger scale, with the current 19-story iteration of the hotel opening its doors in 1907). Before the Plaza, he noted, the people who represented the nexus of money, status and influence in the city—think the Rockefellers, the Astors and the Vanderbilts—would entertain guests in their own lavish homes. The Plaza, with its chateau-like architectural design and ornate interiors, changed all of that.

“It was built so high-end and so ornate because it was supposed to get the people of high society to feel like they were in one of their own mansions,” Draper said. “It used to be that only poor people lived in [multi-tenanted] buildings; if you had money and power, why would you want neighbors? But the Plaza was cool, it was chic, it was the ‘in spot’ for people with money and power. People in high society were willing to live there and socialize there—instead of doing it in their homes, they’d do it in the [Grand] Ballroom.”

It was that status that led captains of American industry like Conrad Hilton and A.M Sonnabend to vie for the Plaza in the middle of the 20th century as the crown jewel of their respective hotel portfolios. Hilton purchased the property for more than $7 million in 1943, and spent millions more on refurbishing it, before selling the Plaza to Sonnabend for around $15 million in 1953 in a sale-and-leaseback agreement. Sonnabend’s Hotel Corporation of America—now known as Sonesta International Hotels—eventually took over management of the Plaza in 1960 and operated the hotel until 1975, when it was sold to Westin International Hotels for $25 million.

That was followed by the most infamous chapter of the Plaza’s ownership history in 1988, when Trump acquired it from Westin for roughly $400 million. In typical grandiose, Trumpian fashion, the real estate magnate took out a full-page ad in The New York Times headlined, “Why I Bought the Plaza,” which heralded his new buy as “a masterpiece” and compared it to the Mona Lisa.

Trump even admitted that he’d paid over the odds for an asset that he had longed to own for years, writing: “For the first time in my life, I have knowingly made a deal which was not economic—for I can never justify the price I paid, no matter how successful the Plaza becomes.”

The sentiment would ring true in 1992, when Trump’s ownership of the Plaza fell victim to his heady buying spree of the late 1980s and early 1990s. After spending billions investing in everything from Atlantic City casinos to commercial airlines, Trump’s creditors came calling, and he lost control of the asset to bankruptcy in 1992.

Prince Al-Waleed bin Talal of Kingdom Holding teamed up with Singaporean investors in 1995 to acquire the Plaza for $325 million from Trump’s creditors, and the property traded again nearly a decade later in 2004, when Elad Properties picked up the hotel for $675 million.

Miki Naftali—the former president and CEO of Elad Properties who now leads his own eponymous development firm, the Naftali Group—recalled that at the time of Elad’s acquisition, the property “was in disrepair” and sorely in need of a revamp. Furthermore, he told Commercial Observer, “it was impossible to deliver five-star service with more than 800 [hotel] rooms.”

So Elad set about an ambitious overhaul of the Plaza—gut-renovating the interior (except for landmarked spaces like the famed Grand Ballroom, Palm Court and Oak Room, which were restored) and converting a good chunk of the building into residential apartments while maintaining a smaller, 131-key hotel. Elad spent $450 million on the project, which saw the Plaza close its doors for three years before reopening in 2008.

According to Naftali, the redevelopment of the Plaza would have been impossible without the funds generated by the residential conversion, which yielded 181 privately owned condominiums that sold out for a combined $1.4 billion. Additionally, the new Plaza featured 150 “condo-hotel” units meant to accommodate long-term stays; 50 of those 150 rooms were sold to private investors, with the hotel ownership retaining the remaining 100 units. (The condo-hotel units, Naftali noted, were part of a compromise with the hotel employees’ union, which was concerned about the hotel jobs that would be lost via the residential conversion.) Elad also upgraded the retail offerings at the property, opening a new food hall helmed by celebrity chef Todd English.

While Elad “made a lot of money” on its undertaking at the Plaza, Naftali noted that historic, aging buildings of its like require a great deal of maintenance and care even after undergoing a major facelift. “These properties need to be maintained on an annual basis; we spent $450 million to renovate [the Plaza], but if you don’t maintain it, the property goes into disrepair,” he said. (The Qataris who now own the Plaza, Naftali added, are “very smart people” who “have the money to maintain the property in a five-star quality.”)

Subrata Roy’s Sahara India Pariwar acquired Elad’s controlling stake in the Plaza in 2012. But in the wake of the Indian magnate’s legal difficulties, Sahara spent much of its ownership tenure seeking to offload the asset (as well as its Dream Downtown hotel in Chelsea and the historic Grosvenor House hotel in London). That dynamic resulted in numerous reports and rumors in recent years of various entities either lodging offers for the Plaza or having held talks to acquire it.

The uncertainty all came to a head with the news that Katara had beaten out the likes of Ashkenazy, Kingdom, Hakim and Trinity White City to successfully purchase the hotel, making it the company’s first U.S. hospitality asset (though Katara parent QIA did acquire the St. Regis San Francisco for around $175 million in late 2016).

The Katara deal comes less than a year after Sahara retained Jeffrey Davis and Gilda Perez-Alvarado of JLL’s hotels and hospitality division to market the Plaza to a worldwide cache of prospective investors. The marketing process saw roughly 50 different parties contacted about the possibility of acquiring the famed property—but in the end, it was the Qatar-backed entity that added the Plaza to the Gulf state’s ever-growing portfolio of global real estate holdings. (Representatives for Katara did not return a request for comment.)

The acquisition of the Plaza, however, is certainly the sovereign wealth fund’s grandest display of intent as far as its designs on the city’s commercial property market. The deal was likely assisted by the fact that Hamad bin Jassim bin Jaber Al Thani, the former prime minister of Qatar, reportedly owned more than $400 million in debt on the Plaza—a dynamic that very likely could have influenced Katara’s selection as the winning bidder for the hotel.

However the deal came together, what’s apparent is that Katara and its backers are the latest in a long line of real estate players who view the Plaza as more than just a hotel—it’s a trophy, the ownership of which serves as a statement of status and influence above all.

“This is the most iconic real estate in the world,” JLL’s Davis told CO. “The types of people who have owned [the Plaza] is a testament to its being the most iconic asset given its location, its prestige, its architecture and its history. It all lends itself to one of those trophy assets that everyone has to own.”